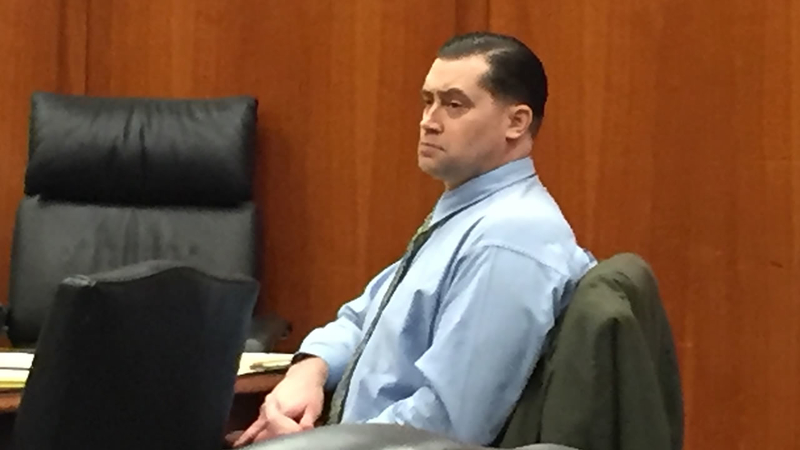 SAN JOSE, Calif. (KGO) -- Relatives of a man killed in San Jose three years ago know well how slowly the wheels of justice can turn. They have been waiting for today, the day the trial began for his accused killer.

"I am not a murderer, and I did not murder anyone."

Those were the words of Los Altos resident Steve Hlebo from inside the Santa Clara County Jail in January 2016 after his arrest for the presumed murder of co-worker Kyle Myrick.

The body of 29-year-old-Myrick was found a few days later, dumped along a creek in the Santa Cruz Mountains. They had worked together for only a few days at a San Jose motorcycle shop, assembling ATV's (all terrain vehicles) for customer delivery.

Tuesday morning, Hlebo's jury trial got underway in San Jose with more than two dozen relatives and friends of Kyle Myrick seated in the sixth floor courtroom of Superior Court Judge Sharon Chatman at the Hall of Justice. A panel of eight women and seven men are seated as jurors, 12 of whom make up the jury plus three alternates.

A number of family members, including victim Myrick's mother, Kelly Sparry, and his stepfather, John Sparry, have been attending preliminary hearings. They counted 38 times.

This hearing, three years after the crime, is the one that counts since the prosecutor is seeking a homicide conviction as the trial begins.

Assistant district attorney Sumerle Davis told jurors in opening arguments that the medical examiner ruled that Myrick had suffered a "traumatic" death, dying of blunt force trauma. She said his left ear was missing and was found in an abandoned storage room at the motorcycle shop. She also said that Myrick had broken eye sockets, a fractured nose and a fractured jaw.

"Kyle had a big heart," said Myrick's mother. "He was kind, and he'd do anything for his friends and family, so thinking of somebody attacking him like that, I don't understand."

Hlebo previously had entered a plea of not guilty. He sat in court Tuesday in a dress shirt and slacks with a suit jacket draped on the back of his chair. The Myrick family said at previous hearings, Hlebo was seen wearing an orange jump suit, and he was in handcuffs and shackles.
When asked why it's important for the family to be in court for the start of the trial, Myrick's stepfather John Sparry said, "We want to show our support for our son, and we want everyone to know how much we love him, and everyone is here for that," referring to the large group of relatives and friends who formed a semi-circle around them outside the courthouse during the noon recess.

"Your life gets put on hold," said Kelly Sparry, Myrick's mother. "All you think about is getting justice for Kyle and hoping that he (Hlebo) goes to prison and people can get on with their lives without focusing on coming to court every month for three years."

Hlebo's court-appointed defense attorney, Annrae Angel, told the jurors in her opening argument that they will not be able to find the 42-year-old defendant guilty of first or second degree homicide. Instead, she suggested that the crime could be "voluntary manslaughter" without providing additional details.

She said she will call a number of witnesses who will attest to Hlebo not using drugs. Others will say Hlebo appeared not to be feeling well the day Myrick disappeared from work.

In the jail interview with ABC7 News three years ago, Hlebo claimed that someone had put drugs in his coffee.

"I want to bring closure to this. I just miss Kyle every day," said Kelly Sparry.