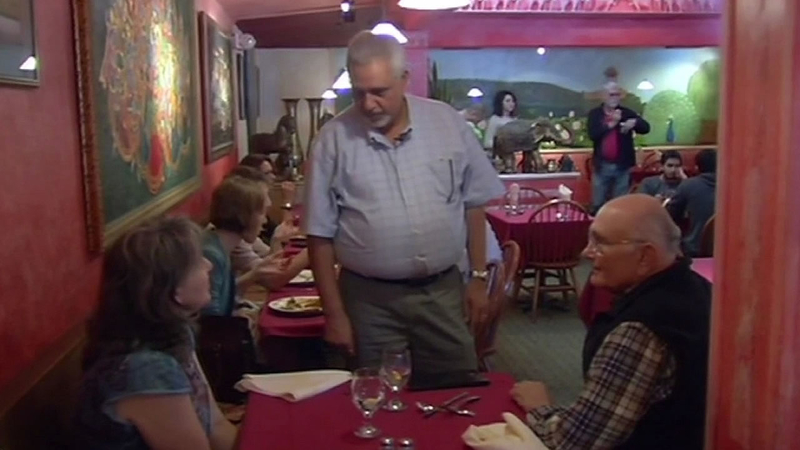 SAN RAFAEL, Calif. (KGO) -- Wednesday was a special day for a Marin restaurant owner and his staff who served a Thanksgiving feast to hundreds for free.

There's no turkey, but there's Indian food. The line of people waiting in line for it stretches around the block and this has become a Marin County tradition for 10 years. We can thank one man who is extremely thankful himself.

ABC7 News followed the man into the kitchen who was about to serve more than 1,000 people Wednesday night, out of two restaurants and all for free. At Lotus Cuisine of India in San Rafael, Paul Sroa and his staff have turned it into a habit and self-imposed privilege for a decade.

"It is not a lot of work. It is a lot of feeling good because you are giving back," Sroa said.

"Oh we are happy. We're proud. We want to do it," chef Avatar said.

Sroa came to the United States in 1984. Back then, he was little more that kid from North India with a big dream and a stronger will.

It's been a success built on a reputation. Sroa's all-you-can-eat lunch buffets are inexpensive and legendary in these parts. Wednesday night's buffet was expected to be even larger, and cuts no corners. Not in San Rafael, nor at his restaurant in Fairfax, either.

"Actually, when I overheard it, I almost started to cry because I thought how beautiful to serve so many people," San Anselmo resident Melinda Martin.

Officially, there's no such holiday as Thanksgiving in India. Sroa learned about that after moving to the states. There's no turkey served, just Indian food, lots of it.

"They will all call each other on the cellphone and say, 'just get over here,'" Sroa said.