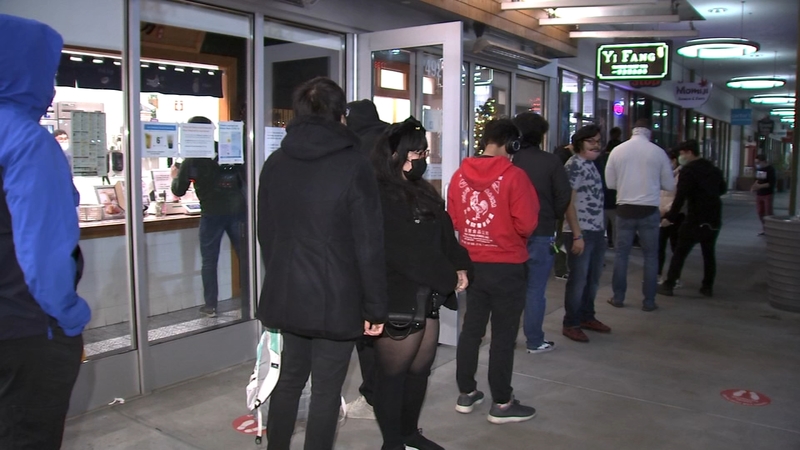 Long lines on Thanksgiving outside GameStop for PS5 consoles

COLMA, Calif. (KGO) -- While most stores opted to close on Thanksgiving, some opened to big crowds and long lines.

Many waited several hours just to get into GameStop in Colma, California.

The hottest item among these shoppers...

It appears the PlayStation 5 is the hottest item in town! GameStop opened this Thanksgiving evening and they were packed. @abc7newsbayarea pic.twitter.com/buVyF0pxjU

"It's Playstation 5, it's hard to buy them right now," said shopper Tony Santos.

"I waited all November for this day," said Collin Chew.

In fact, shoppers here told us they chose to stay close to home and away from major cities.

"San Francisco lately has been pretty crazy. I've been around this area for a lot of time so I feel like this is the safest place," said Michelle Deleon.

While stores like Target and Best Buy closed for Thanksgiving, there were several open businesses, like movie theaters.

We came across a family outing for youngsters at Century Theatres in Daly City.

"Do you like Thanksgiving? Why do you like it so much?" we asked one 5-year-old girl. Her reply was simply, "Because I can spend the day with my family!"

Don't fall for fake discounting. Make sure that deal is really as good as it looks.

"It's Thanksgiving and it's my brother's birthday and we're going to the movies," said 7-year-old D'arie Daniels.

"Finally something open is fun to have," said Giovannie Larreynaga.

"You have surround sounds, you have the clear sound effects," said Henry Larreynaga.

The brothers drove from San Francisco to Daly City to see a movie.

But to those still being questioned about Thanksgiving shopping, many here will tell you, they're buying for their loved ones.

"I'm going to give it for my kids. They don't know yet, it's supposed to be a surprise. Hopefully they don't get to see this," said Santos.

"For my son, Shane Bauer, this is all he wanted for Christmas, the XBox Series X, not the digital. I heard that a million times so I snuck out of the house today after we ate hoping to get it," said Jon Bauer.

And to those who admitted to buying items for themselves, they also said it was okay, because their wife said so.

"My wife is like, 'you should go get one' and I'm like, 'what's the catch'? You know because happy wife, happy life. She did say I can't open it for a while which is fine, but I'm happy," said Eddy Anderson.

And while many major retailers closed for Thanksgiving, they'll be open bright and early on Black Friday. The Target we came across in Daly City opens at 7 a.m., like so many other spots across the Bay and across the country.