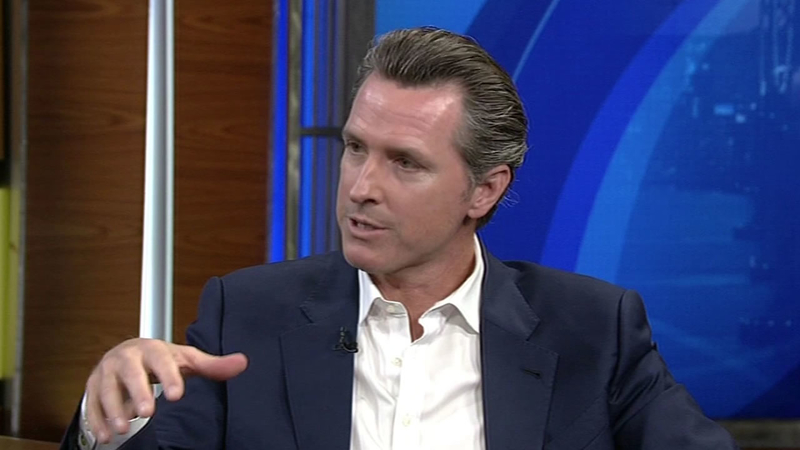 SAN FRANCISCO (KGO) -- A new bill is on President Obama's desk right now called The Research Excellence and Advancements for Dyslexia Act, or READ Act, which could provide millions for research into the learning disorder called dyslexia.

As many as 8.5 million American school children may have dyslexia. Here in California, our own Lt. Gov. Gavin Newsom has the learning disorder. He spoke with ABC7 News about how he's passionate about raising awareness about dyslexia because it affects him every day.

"I think for me it was two things - one, it was very difficult for me in terms of my own academic experience," he said. "School was a terrible and terrorizing experience. I will just be candid with you -- spelling, reading, writing."

Newsom visited me on the set of our show, "Beyond the Headlines," to talk about the impact of dyslexia on his life. It affected his self-esteem at a very young age.

RELATED: The Research Excellence and Advancements for Dyslexia Act

"I remember coming home and I found out I had dyslexia," he said. "I just thought I was frankly not that smart."

Dyslexia is a brain processing disorder which affects a person's ability to learn.

Newsom gives a lot of credit to his family, especially his late mother, for his success in learning. She was a single mom, also raising a daughter, and fought hard to get her son help to read.

"My mother hid it from me for years," said Newsom. "I was diagnosed as dyslexic, but she didn't want to stigmatize me, and I appreciate that in hindsight. I lost her 15 years ago, so I don't have the benefit of talking to her about it today."

He went on to say, "I went to five schools in seven years, so I bounced around because, frankly, the schools back then didn't really focus on it."

School was torture. Newsom says he didn't want to read out loud.

"You sit in back of the class," he explained. "I mean, in the back of the class with eyes down, back of the class acting like you're doing something else, so no one would ever look back at you. I'll never forget that moment... I had to stand up and people start laughing. I'm shaking and I tried to read and I can't... and they're laughing."

He survived the humiliation and learned to read well enough to graduate from college. His mother was by his side.

Newsom became a successful businessman and went into politics. He was elected mayor at the age of 36 in 2004 and became the youngest mayor in San Francisco in a century.

"One of the first things I did as mayor, the first public events, was visiting kids with dyslexia in a school," he said. "And everyone was shocked to know that I had this learning disability which, if I look back, was probably the best thing that's ever happened to me."

He's had a lot of successes and failures in life.

"Being creative, learning how to fail," he said. "Because that becomes an expertise, of those that are struggling with learning disabilities and understanding the importance of failure, in terms of ultimate outcome and success in life."

He added, "There's an entrepreneurial energy, there's a risk orientation of all of it. My politics, I think, has followed accordingly."


Thirty-six days after becoming mayor, he ordered the city clerk to begin issuing marriage licenses to same-sex couples. State laws limited marriage to between a man and woman.

When asked if he reads speeches, Newsom answered, "I rarely read speeches. If I do, they're the worst things I ever do cause they're terrible. Teleprompter is easier than looking down at a piece of paper and looking up, because I'll lose my place."

Newsom is a father of four. When asked if he's worried about this for them he said, "I'm not worried about it, but I'm focused on it. If our kids are -- they just turned 6 and 4, 2, and a brand new baby -- if they're dyslexic, fabulous. That just allows us to have the opportunity to see them grow a little differently and I'm for different."