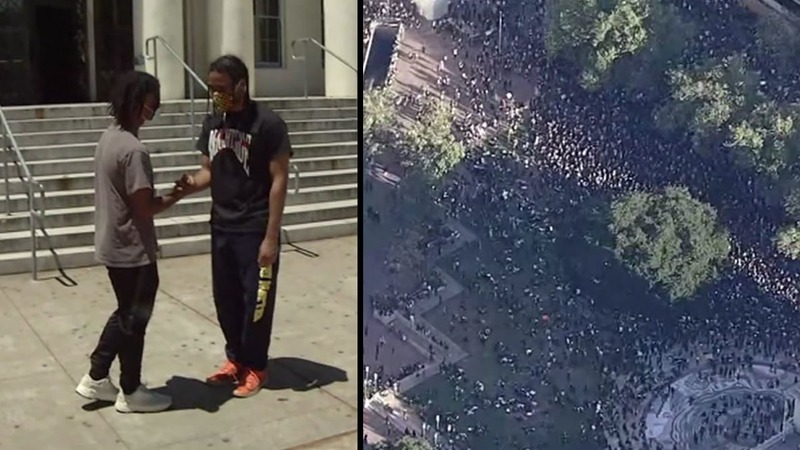 OAKLAND, Calif. (KGO) -- 19-year-olds Akil Riley and Xavier Brown are childhood friends who came together to create a movement. They mobilized 15,000 to protest the death of George Floyd.

"To have a solidarity march really to say 'we feel you Minneapolis, Oakland feels you,'" said Howard University student, Akil Riley.

RELATED: George Floyd's brother Terrence Floyd announces memorial, march in New York City
The grassroots movement began when Riley texted Brown, "He said I'm trying to working the solidary march for Tuesday and I wonder if you want to be part. I Said 'Let's do it'"

The organizing was key. It took four days with social media playing a vital role, and the rules were clear.

"We set out the guidelines that we didn't want to loot and destroy things," said Riley and added, "That just wasn't what we were trying to do... Then, I think that attracted a bigger crowd because we had younger people and older people."

"We also saw a beautiful peaceful protest yesterday 15,000 Oaklanders marching demonstrating their desire for a just system and a demand for change and racial justice. It was organized by Oakland youth, supported by families. And we are very proud of that beautiful demonstration of a demand for change coming from Oakland, California," said Mayor Schaaf.

We asked them what this movement taught them about the power of their generation:

"I hope it changed people's ideas about how they can do something," said Riley.

"I think it gave people hope that the youth have the power to organize," said Brown.

A power that not only influenced and inspired thousands but also the principal at Oakland Tech High School.

"It does give me hope because sometimes I feel kind of hopeless besides educate. That's the way I know how to improve the world and I'm just happy to see these young people doing it their way," said Staci Ross-Morrison.