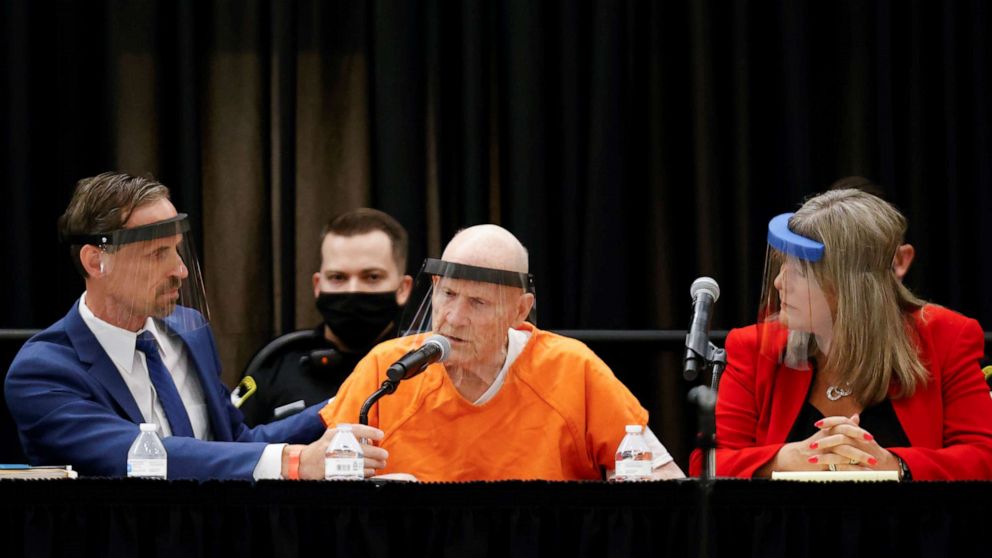 Joseph DeAngelo, the man now known as the Golden State Killer, pleaded guilty on Monday to 13 counts of first-degree murder in front of dozens of victims and victims' relatives, prosecutors said.

The plea deal also required him to admit to multiple uncharged acts, including rapes, which were described in horrific detail by prosecutors.

In many cases, DeAngelo broke in, confronted couples asleep, then tied up the man and raped the woman. He often threatened to kill them and would eat their food and steal belongings.

After DeAngelo was taken into custody in 2018, he said to himself in an interview room, "I did all those things. I destroyed all those lives," according to prosecutors.

Instead of a courtroom, DeAngelo, in an orange jumpsuit and using a cane, appeared in a California State University-Sacramento ballroom. With over 150 victims and relatives expected to attend, prosecutors sought a room that would be large enough to accommodate them and promote social distancing, The Sacramento Bee reported.

The deal will"allow the remaining victims and family members ... to hear the defendant admit that he committed these acts," Sacramento County Deputy District Attorney Amy Holliday said at Monday's hearing.

The death penalty will be taken off the table and he will serve life without parole, Holliday said.

DeAngelo, now 74 years old, was accused of committing 13 murders as well as multiple rapes and burglaries in the 1970s and 80s, terrorizing communities from Northern to Southern California.

DeAngelo was a police officer during the crimes in the 1970s.

DeAngelo on Monday admitted the counts against him in a weak, strained voice, saying each time, "I admit."

He admitted to shooting and killing Claude Snelling in front of Snelling's daughter when he broke into their home in September 1975. DeAngelo kicked the daughter three times in the face and then fled, prosecutors said.

DeAngelo also admitted to the attempted murder of a police officer but was not charged with the crime. DeAngelo shot at the officer when the officer confronted him trying to ransack a home in 1975.

He also said "I admit" to the February 1978 killing ofBrian and Katie Maggiore.

The couple was walking their dog when Brian Maggiore was shot. Katie Maggiore ran away and yelled for help, but DeAngelo caught up with her and shot her in the head, prosecutors said.

DeAngelo admitted to the killing of a couple in Goleta, California, in 1979, after which he rummaged through the fridge and ate leftovers.

Also in Goleta,friends Cheri Domingo and Gregory Sanchez were killed in July 1981.

Sanchez was shot and then beaten to death, bludgeoned in the head two dozen times, prosecutors said.

DeAngelo then bound Domingo, raped her and beat her in the head more than 10 times, prosecutors said.

"We've served time all these years, now it's his turn to serve time," she said.

DeAngelo admitted to the killing of Keith Harrington and the rape and killing of his wife Patrice Harrington, who were bludgeoned to death at their home in Dana Point in August 1980.

DeAngelo admitted to the murder of Manuela Witthuhn, who was bound, raped and bludgeoned to death while home alone on Feb. 5, 1981.Her body was found by her mother, Spitzer said.

He admitted to the killing of 18-year-old Janelle Cruz, who was also bound, raped and bludgeoned in the face and head at her home in May 1986.

"You attacked her, you beat her and you raped her," Spitzer said in court, addressing DeAngelo.

"Three of her teeth had been knocked out and she had swallowed a significant amount of blood," he said.

The "Golden State Killer" crimes went unsolved until April 2018, when DeAngelo was arrested in Sacramento County.

DeAngelo became the first public arrest obtained through genetic genealogy, a new technique that takes the DNA of an unknown suspect left behind at a crime scene and identifies him or her by tracing a family tree through his or her family members, who voluntarily submit their DNA to public genealogy databases.

This allows police to create a much larger family tree than using law enforcement databases.

To identify DeAngelo, investigators narrowed the family tree search based on age, location and other characteristics.

Authorities surveilled DeAngelo and collected his DNA from a tissue left in a trash. Investigators plugged his discarded DNA back into the genealogy database and found a match, linking DeAngelo's DNA to the DNA found at crime scenes, prosecutors said.

Since DeAngelo's arrest, over 150 other crime suspects have been identified through genetic genealogy.