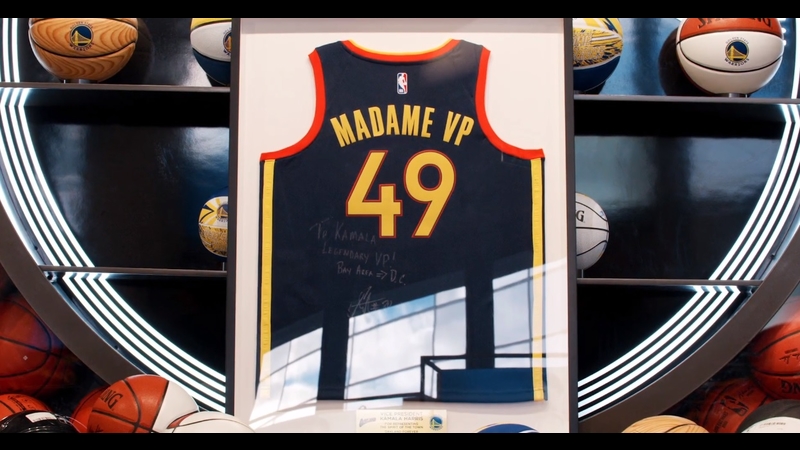 OAKLAND, Calif. (KGO) -- Vice President Kamala Harris will have a keepsake memento from her hometown to show off in Washington, D.C., one that comes courtesy of the Golden State Warriors.

The team sent Harris a jersey emblazoned with her new title: "Madame Vice President." The jersey takes after the "We Believe" Warriors look of the late 1990s, but with a modern touch -- Stephen Curry's autograph on it.

On the front are the words "Oakland Forever," a tribute to the team's former home city and Vice President Harris' hometown. On the back is the number 49, as Harris will be the country's 49th vice president.

"Madame Vice President, I'm not saying you got to put this up in your office in the White House, but it'd probably be a good idea," Curry said. "Congratulations for blazing your own path. We are all rooting and supporting you the whole way."

"This means so much to me," Harris replied. "I will proudly display this in the office of the Vice President of the United States, an office I am about to occupy. I cannot thank you enough, and you always bring such joy and pride to me as a daughter of Oakland."

The East Bay native has been a life-long Warriors fan. Before her time in Washington, D.C., she frequently attended games.

The Dubs will be sporting these jerseys in their seventh Inauguration Day appearance Wednesday night against the San Antonio Spurs.

Stephen Curry is a fan of the classic look.

"They were fire," he said of the "We Believe" era jerseys.

"They were fire... the look it's just so classic." Tomorrow night the @warriors will debut their #OaklandForever jersey. @StephenCurry30 is definitely a fan of this look ➡️ https://t.co/cPIht52m6c #ABC7Now #DubNation
cc @Oaklandish pic.twitter.com/sviC6VBpdT

Golden State is 5-1 in their previous Inauguration Day games, dating back to when Harry Truman became president in 1949, according to Warriors PR.