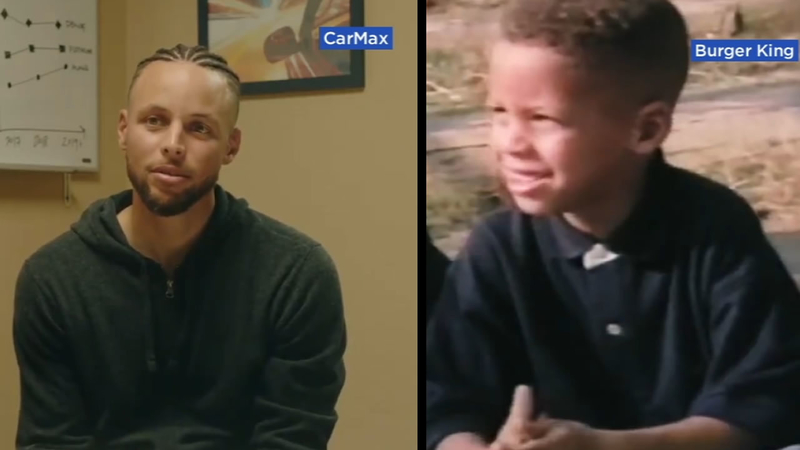 The "Splash Brother" has done it all on the basketball court. His success on the court and his easy-going personality make him an obvious fit to partner with numerous companies and endorsements.

A set of four different commercials have been released over the past few months, highlighting Steph's comedic and acting skills. In one CarMax ad, the commercial addressed the common mispronunciation of his first name, Stephen.

Coming soon on @abc7newsbayarea -- A look at Stephen Curry's history in TV commercials... he's been doing this for a while. #ABC7Now #DubNation pic.twitter.com/hRieN2yKuC

"Having a little fun with something that's been a problem since I was a kid having my name mispronounced even to this day," said Curry. "So, still working on it."

Really enjoyed talking with Damion Lee during today's Warriors availability, we need to get this man a commercial too! #ABC7Now #DubNation pic.twitter.com/RiPHbvQy7G

I first asked Stephen Curry about his new line of CarMax Commercials in February, and after he released some outtakes from those CarMax commercials, a follow-up was in line.

I asked Steph if he had grown since a series of Burger King commercials in the 1990's, in which he had several lines with his father Dell and brother Seth alongside.

“Bring home the bacon dad...” a young @StephenCurry30 in a Burger King commercial w/ his dad Dell and brother Seth. This is classic! Via @TheWarriorsTalk pic.twitter.com/C6hKijTSxv

"Yeah my lines have picked up tremendously, so that's big," Curry said laughing.

Be on the lookout for Steph's latest CarMax commercial with Women's Basketball Hall of Famer and current Seattle Storm star Sue Bird.

Go here for the latest stories and videos about Stephen Curry and the Golden State Warriors.