AP
SAN FRANCISCO -- Altria, one of the world's biggest tobacco companies, is spending nearly $13 billion to buy a huge stake in the vape company Juul as cigarette use continues to decline.

The Marlboro maker said Thursday that it will take a 35 percent share of Juul, putting the value of the company at $38 billion, larger than Ford Motor Co., Delta Air Lines or the retail giant Target.

"We are taking significant action to prepare for a future where adult smokers overwhelmingly choose non-combustible products over cigarettes," Altria Chairman and CEO Howard Willard said in a prepared statement.

E-cigarettes and other vaping devices have been sold in the U.S. since 2007 and have grown into a $6.6 billion business, and it is already intersecting with another seismic shift in the U.S. - the legalization of marijuana across the U.S.

The investment comes about two weeks after Altria stepped into the cannabis market with an investment of around $2 billion in Cronos Group, the Canadian medical and recreational marijuana provider.

North American consumer spending on legal cannabis is expected to grow from $9.2 billion in 2017, to $47.3 billion by 2027, according to Arcview Market Research, a cannabis-focused investment firm.

This week Anheuser-Busch InBev, the maker of Budweiser, partnered with medical cannabis company Tilray in a $100 million deal to research cannabis-infused drinks for the Canadian market. In August, Constellation Brands announced a $4 billion investment in another Canadian pot producer, Canopy Growth Corp., the largest to date by a major U.S. corporation in the cannabis market.

With nicotine-based vaping, devices heat a flavored nicotine solution into an inhalable vapor. They have been pitched to adult smokers as a less-harmful alternative to cigarettes, though there's been little research on the long-term health effects or on whether they help people quit.

The growing popularity of e-cigarettes has alarmed a number of health officials.

There is a scramble in the U.S. to reverse a recent explosion in teen vaping that public health officials fear could undermine decades of declines in tobacco use.

An estimated 3.6 million U.S. teens are now using e-cigarettes, representing 1 in 5 high school students and 1 in 20 middle schoolers, according to the latest federal figures.

Juul said Thursday that it recently began to take actions intended to prevent underage vaping. The company shut down its Facebook and Instagram accounts last month and halted in-store sales of flavored pods, which were viewed by many critics as a direct play for younger users.

Juul also said that it's also enhancing age-verification for its online sales.

Juul Labs Inc., based in San Francisco, said it had initially hesitated to accept the investment from Altria.

"But over the course of the last several months we were convinced by actions, not words, that in fact this partnership could help accelerate our success switching adult smokers," Juul said.

Juul will remain an independent company, but it gains access to Altria's massive infrastructure and reach. Namely, Altria will help Juul secure space on store shelves beside traditional cigarettes. It will also help Juul reach smokers via cigarette pack inserts and mailings.

Under the agreement, Altria's only entry into the e-cigarette market will be through Juul for at least six years.
Report a correction or typo
Related topics:
health & fitnesssan franciscosmokingvapingteenu.s. & worldcalifornia
Copyright © 2020 by The Associated Press. All Rights Reserved.
VAPING 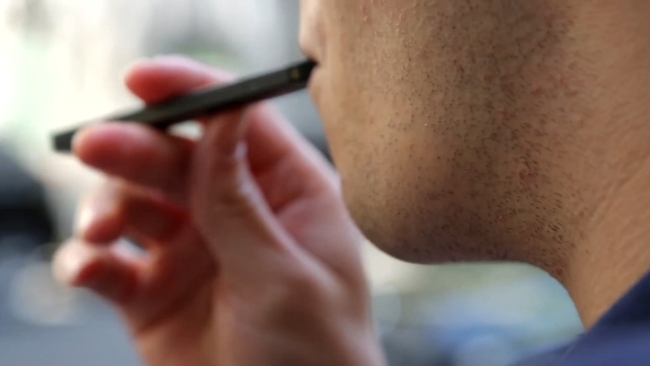