KGO
SAN FRANCISCO (KGO) -- A University of California team has just won its second design award for a medical device that looks like a lopsided softball -- and could save lives in the developing world.

"Pneumonia is the number one killer in children worldwide," explained Adam Rao, who's a medical student and Ph.D. candidate at UCSF.

Rao and his team created Tabla, the round white device with only one button, to help diagnose the deadly infection in countries where chest X-rays are hard to get or prohibitively expensive. Based on the "percussion technique" of tapping on a patient's chest and listening with a stethoscope, Tabla makes a swooping sound while a doctor holds it against the front of a patient's body and records the sound with a digital stethoscope placed on the patient's back.

"The percussion technique was actually inspired 300 years ago by tapping on wine barrels to check for fluid levels," Rao said.

And while he said it may take doctors hundreds of cases to gather the experience needed to identify pneumonia by sound alone, the Tabla team is using machine learning to build that intelligence into its smartphone app.

"It processes it in real time, and out comes a pneumonia likelihood score," said Neil Batlivala, the team's machine learning lead.

Batlivala explained that when fluid accumulates in a patient's lungs, certain sound frequencies are muffled as they pass through the body. The exact change in the sound depends on age, gender, height, weight, and countless other factors, he said -- and that's the challenge. While machine learning algorithms like Google's image search have millions of samples to draw on, Tabla is trying to accomplish the same feat using only hundreds of samples.

"It's a lot easier to find pictures of cats than it is to get patient data of pneumonia," Batlivala said.

While the team has spent long hours over the past year perfecting its hardware at U.C. Berkeley's Jacobs Institute for Design Innovation, the next phase of their journey will take place in the emergency rooms of UCSF's hospitals -- looking for volunteers.

"As they come in, they offer up their time and we can get recordings from them," Batlivala said, adding that the team wants to gather sound samples from at least 100 healthy patients and 100 who are suffering from pneumonia before deploying the device on a trial basis with Narayana Health hospitals in India.

The device promises a more affordable way for doctors in developing countries to diagnose pneumonia: a $70 alternative to the staggering cost of a chest X-ray machine, which Rao estimates at $51,500, plus an additional $5,900 per year to operate, in northern India. 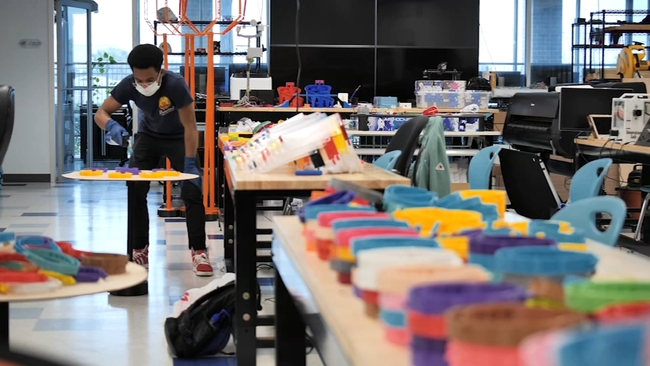