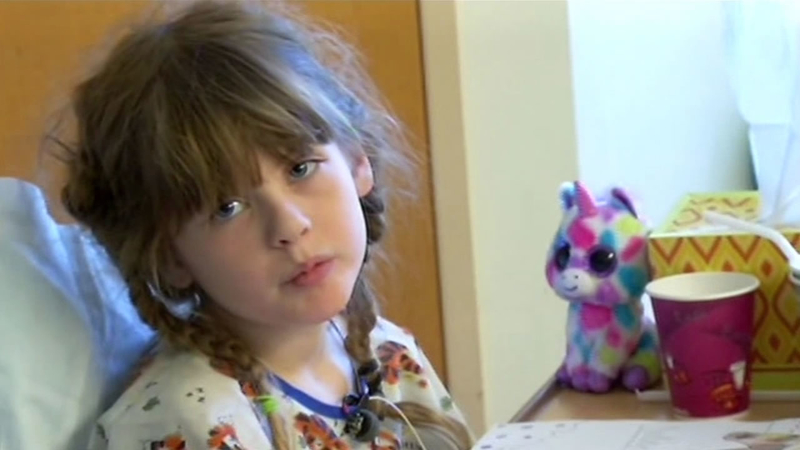 PALO ALTO, Calif. (KGO) -- A freak accident involving an untied shoelace sent a little Belmont girl to Stanford hospital with a very serious injury. It was a lunchtime accident last Friday, that sent 7-year-old Sophia to Lucile Packard Children's Hospital at Stanford for nearly a week.

"I tripped on my shoe lace, and fell on the curve, and I hit my side on it," said Sophia Angelini.

She went to the school nurse's office because of the pain, and because she had thrown up, her parents were called to take her home. They thought it was probably something minor, but the vomiting continued. And so did the trips for care. First to an urgent care center, then a trip to an emergency room before taken to Stanford.

"When we saw the CT scan, we were pretty floored. We didn't even know that was possible, that you could break a piece of your kidney off," Sophia's mother, Sara Angelini said.

But it happened to Sophia and something needed to be done to save her kidney. Doctor Hsi-Yang Wu performed the endoscopic surgery.

"We put a little plastic stent, a tube between the kidney and the bladder. The purpose is to let the urine go from the kidney out into the bladder, rather than sitting around the kidney," Dr. Wu said.

So how do you explain all of this, to a seven year old girl?

"We drew her a picture of a happy kidney on one side, with a smiley face, and a sad kidney on the other. We told her, this is the kidney that got hurt, but he's going to get better in a couple weeks, and his sad face will turn happy," Sophia's father Dominic Angelini said.

Sophia will be out of school for the next two weeks, but doctors have already given her some homework.

Although she's tired, it's an assignment she says she's happy to do.

Sophia was originally scheduled to go home Friday, but doctors tell us that has been pushed back to Saturday. They want to monitor her fever, which is something that is common with kidney injuries.
Related topics:
health & fitnesspalo altochildren's healthchild injuredlucile packard children's hospitalsurgeryaccident
Copyright © 2021 KGO-TV. All Rights Reserved.
TOP STORIES
Bay Area hospitals prepare for 4th COVID surge
3 Bay Area counties may be 1st to mandate masks again
SJUSD says non-vaccinated teachers, staff must test twice a week
Tsunami warning canceled after 8.2 quake off Alaska coast
Here's how, when to watch NBA Draft on ABC
Here's how seawater could be answer to California's drought
Biden set to announce vaccine push for all federal employees
Show More
COVID-19 surge: Experts explain impact for jobs in tech
Pioneering TV pitchman Ron Popeil dies at age 86
Oakland family files lawsuit against driver of deadly hit-and-run
Here's when to get tested for COVID-19 (even if you're vaccinated)
Texas deputy AG apologizes to Biles, calls her 'true patriot'
More TOP STORIES News