KABC
By Rob McMillan and Lisa Bartley
TEMECULA, Calif. -- Brian Tally is a military veteran, a husband, a father of four - and until a few years ago - a successful small business owner. Now, he spends much of his day in a beat-up recliner chair, the only relief he says from unrelenting pain.

"There's not a day that goes by that I'm not in pain," Tally said. "This is the only thing that takes the pressure off my spine." 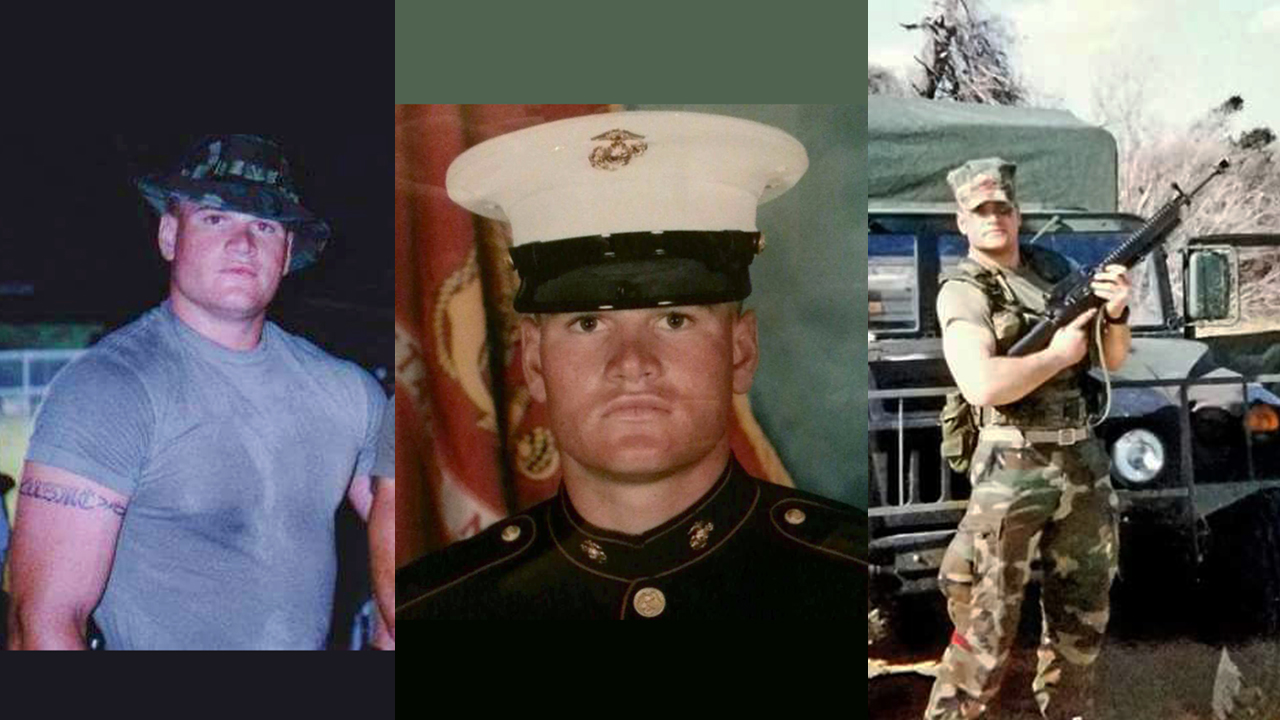 Brian Tally served four years in the United States Marine Corps before starting a small business and raising his family in Temecula.

Brian served four years in United States Marine Corps, but now he's in what he calls the fight of his life.

Brian's downward spiral began in January 2016. Severe back pain, night sweats - he made urgent phone calls to his primary care doctor through the Department of Veterans Affairs. She prescribed painkillers over the phone.

The pain only got worse. He went to the VA's emergency room in Loma Linda twice. Both times - he did not get to see a doctor. And twice - no one ordered a simple blood test.

"I was on the floor, I was in traumatic pain...I was literally in tears," Brian recalled. "They gave me an X-ray and the VA ER in Loma Linda diagnosed me with having a low back sprain and told me to go stretch."

He was seen by a nurse practitioner both times, but again - no doctor.

Brian followed up, as instructed, with his primary care physician at the VA clinic in Murrieta.

"She looked at the two ER reports and she agreed with the original diagnosis - the two diagnoses the ER nurses gave me," Brian said. "She told me to stretch. She ordered more pills."

His primary care doctor did request a consult with orthopedics, but Brian said he was unable to get an appointment. Scared and in debilitating pain, Brian and his wife paid out of pocket for their own MRI.

"My wife made the decision," he said. "She goes - you're down 40 pounds, you have these crazy night sweats, you can't use the bathroom properly - there's something wrong. This doesn't happen to a 39-year old guy."

But again there were more delays. The VA could not fit Brian in for surgery for nine long months.

A nine-month wait was unacceptable to Brian and his wife Jenny. They pushed for an earlier surgery date and the VA agreed to pay for a surgeon outside of the VA system.

"So, had you waited another six months, that would have been disastrous to his bone," said orthopedic surgeon Dr. Jean-Jacques Abitbol of the California Spine Group in San Diego.

Abitbol performed Brian's surgery and said that MRI combined with other symptoms, including difficulty urinating, were an ominous sign and should have been a red flag to VA medical practitioners.

"The bone at the very bottom could've collapsed down, he could have had permanent neurological problems - he could have been paralyzed," Abitbol told Eyewitness News. 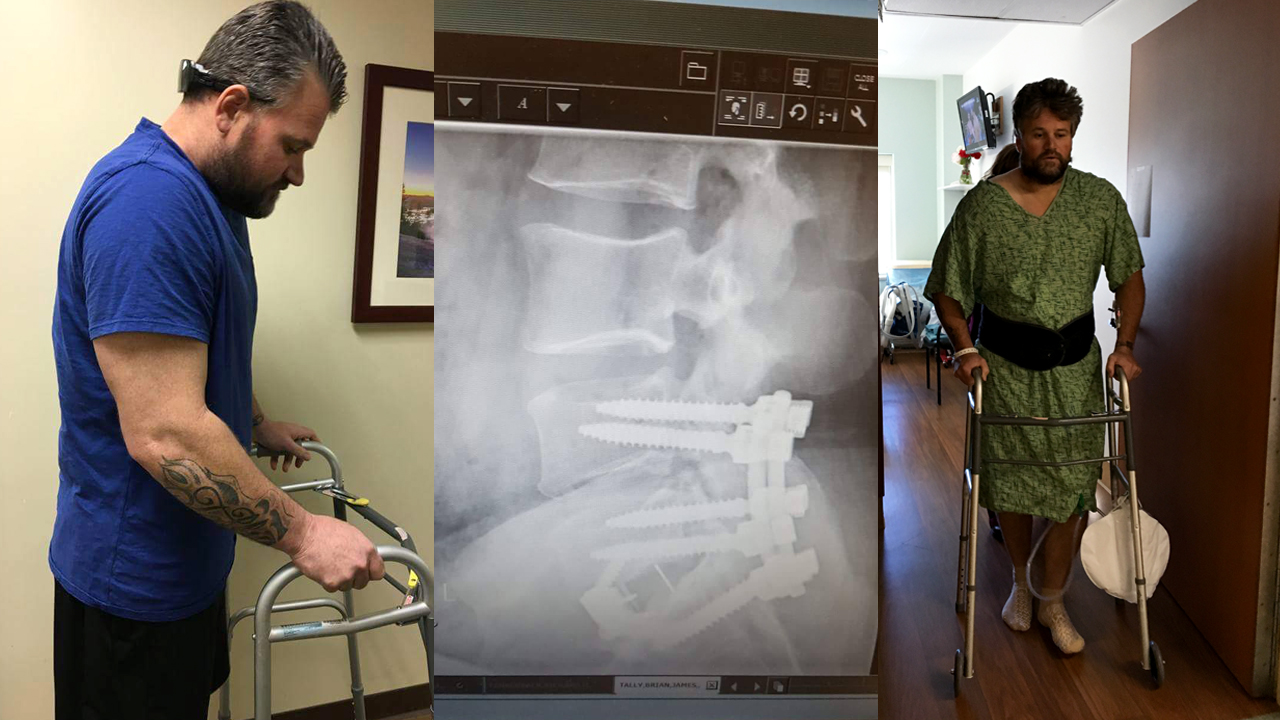 Marine Corps Veteran Brian Tally was misdiagnosed three times by VA medical providers before a surgeon discovered an aggressive staph infection was eating away at his spine.

On the operating table, the news went from bad to worse. An aggressive staph infection was eating away at Brian's spine.

"This kind of bacteria, if not taken care of, can get into the blood and cause what's known as sepsis - and ultimately result in system-wide failure of the organs and ultimately death," Abitbol said. "A term we sometimes use is 'moth-eaten.'"

Abitbol told Eyewitness News a blood test by the VA likely could have spotted the infection before Brian suffered permanent injury. But, again - that never happened. Severe damage to Brian's nerves led to erectile dysfunction, urinary incontinence and bowel issues - along with herniated discs in his neck, causing constant pain.

"It's like you've got an ice pick that's being driven through your neck," Brian said.

Once Brian realized the damage was permanent, he filed a medical malpractice - or tort claim - against the VA.

But suing the federal government, or one of its agencies, is not the most straightforward process. First you have to file a claim under the Federal Tort Claims Act - and then wait six months for a response or an offer to settle your claim out of court. Only then, can you file an actual lawsuit.

"They misdiagnosed me not once, not twice, but three times," Brian said.

Brian followed the rules and filed a tort claim against the VA in March 2017. He then waited the required six months, before learning his claim had been shuffled to a different office as part of a "realignment" and staff reduction at the VA's general counsel office.

Still, Brian was hopeful because he said the new VA attorney handling his tort claim told him that a financial settlement was likely - and that an expert for the VA concluded his primary care physician had failed the standard of care.

"She used these exact words - the VA failed to meet the standard of care and there was a breach - and that there's liability involved and the VA is looking to settle your case," Brian said.

But eight months after he filed the claim, that same VA attorney dropped a bombshell. It turns out that Brian's physician was NOT a VA employee - she's an independent contractor for the VA, and under federal law the VA is not legally responsible for negligence by its contractors.

The VA attorney told Brian there would be no settlement even though their expert agreed the primary care physician had failed the standard of care.

"She has a VA badge, VA scrubs, VA computer, VA business cards - nobody would ever know the difference," Brian said of his physician at the VA clinic in Murrieta.

"They pulled the rug right out from underneath our feet, denied our claim on an employment status and a technicality," he said.

To make matters even worse - during the eight months it took the VA to tell Brian that his primary care physician was a not a VA employee, the California one-year statute of limitations on medical malpractice had expired - meaning he could not sue in civil court either.

"I do want everyone to know I'm not anti-VA," Brian said. "Nobody is perfect, but when you make a catastrophic mistake - you need to be accountable for that action."

Why did it take the VA eight months to figure out Brian's physician was a contractor and not a VA employee? The VA won't tell us. The VA and Brian's primary care doctor ignored repeated requests for an interview.

In a written statement, the VA said it, "always strives to provide Veterans with the very best health care available. When we don't meet that standard, we hold ourselves accountable. In this case, we worked with the Veteran and his attorney in an effort to avoid litigation, and settled this unfortunate case in a way we hope is meaningful to Mr. Tally."

After months of fighting the VA, Brian did get a settlement with the help of Virginia attorney Glen Sturtevant.

"Our veterans have put their lives on the line - given up so much, sacrificed so much for our country - they deserve the very best medical care," Sturtevant said.

The settlement was a tiny fraction of what Brian calculated as his lost, future earnings. Brian said a top VA attorney told him the payout was not intended to be "commensurate with his injuries" but was simply to avoid "litigation risk." And while the settlement refers to Brian's "alleged misdiagnosis, delayed diagnosis, and delayed treatment," it also includes standard legal boilerplate that the VA does not admit to "any liability or fault."

If Brian tried to sue the VA, the case would almost certainly be thrown out - because, again - the VA is not legally responsible for its independent contractors.

Brian said he felt backed into a corner - it was a "take it or leave it" moment for the Marine Corps veteran facing mounting bills and no ability to work.

"That's the real tragedy here, the way that current law is set up - for somebody like Brian - there is no accountability," Sturtevant said.

Shortly after Brian reluctantly agreed to the settlement, he received even more disturbing news from yet another VA medical evaluation performed by an outside, independent physician.

Dr. Arnold Kim wrote in his report that delays in Brian's diagnosis and surgery "allowed for further destruction of the spinal column." Kim refers to Brian's "permanent injury" and the "red flag" missed by healthcare providers at the VA.

He believes the injury to the spinal cord "also led to the veteran's current lumbar IVDS, erectile dysfunction and voiding dysfunction," and that earlier evaluation and treatment "would have likely prevented the majority of the disability from the lumbar spine injury."

But that damning report came too late for Brian to use in his settlement negotiations with the VA, and resulted in just a $100 increase in disability payments per month.

Brian finds it suspicious that he received that report only after he'd agreed to the less than ideal settlement with the VA.

"The more and more I thought about what had happened to me - it felt criminal," he said.

Brian is channeling his pain and frustration into action - a new mission to close the loophole that left him unable to provide for his wife and four children in the way he did before the misdiagnosis.

"I have a new purpose in life and my mission now is to help protect veterans from this shameful loophole that has ruined my life," he said.

Brian traveled to Washington, D.C., in September to meet with lawmakers about his proposed "Tally Bill." It would force the VA to identify independent contractors to patients and require the VA to assume at least some responsibility for medical malpractice by its independent contractors. Congressman Dave Brat of Virginia has agreed to sponsor the bill and plans to introduce it to the House of Representatives in the very near future. 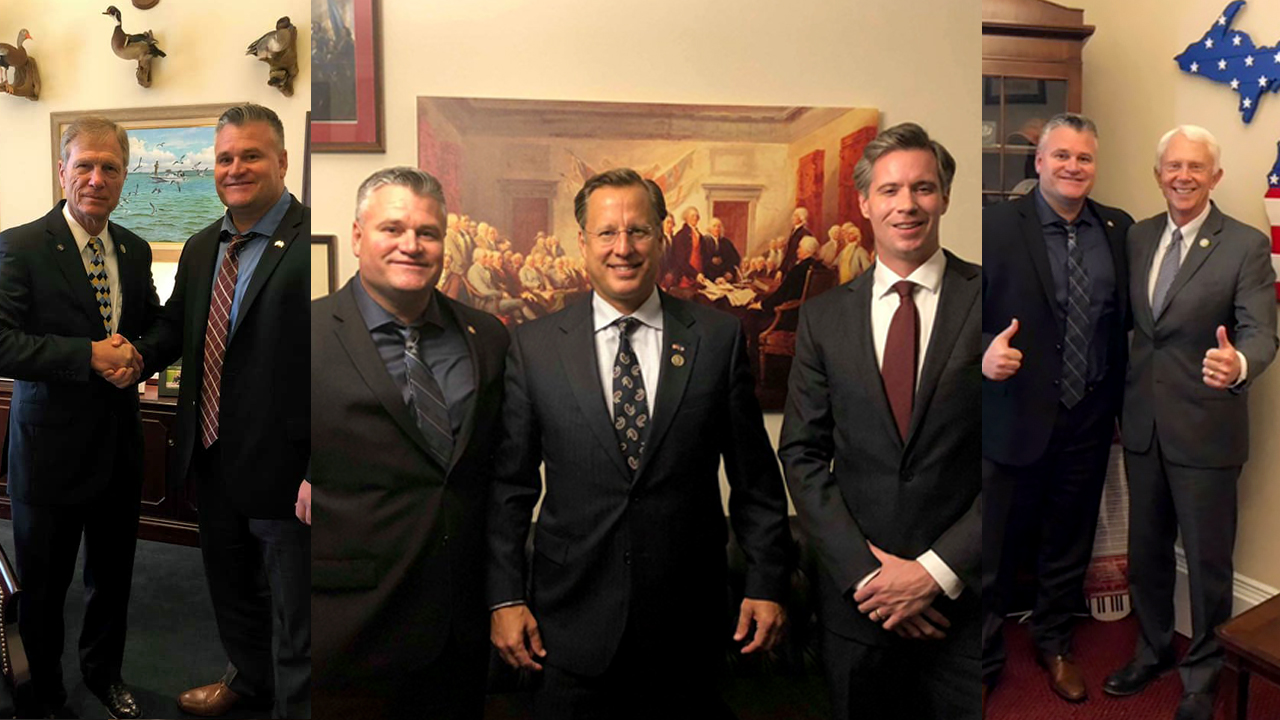 Veteran Brian Tally of Temecula met with lawmakers in Washington, D.C. in September about his proposed "Tally Bill."

"This is how we can fix it -- it's common sense," said Brian, who calls the "great response" from lawmakers encouraging.

Brian also wants other veterans to know about the loophole and believes without the passage of the "Tally Bill," the numbers of veterans affected by this problem will only go up.

He said one of the VA's top attorneys told him the agency is hiring more independent contractors than ever before - and that he's seen it take even longer than eight months to determine the employment status of its employees.

If the bill is passed, it will be too late for Brian and his family. 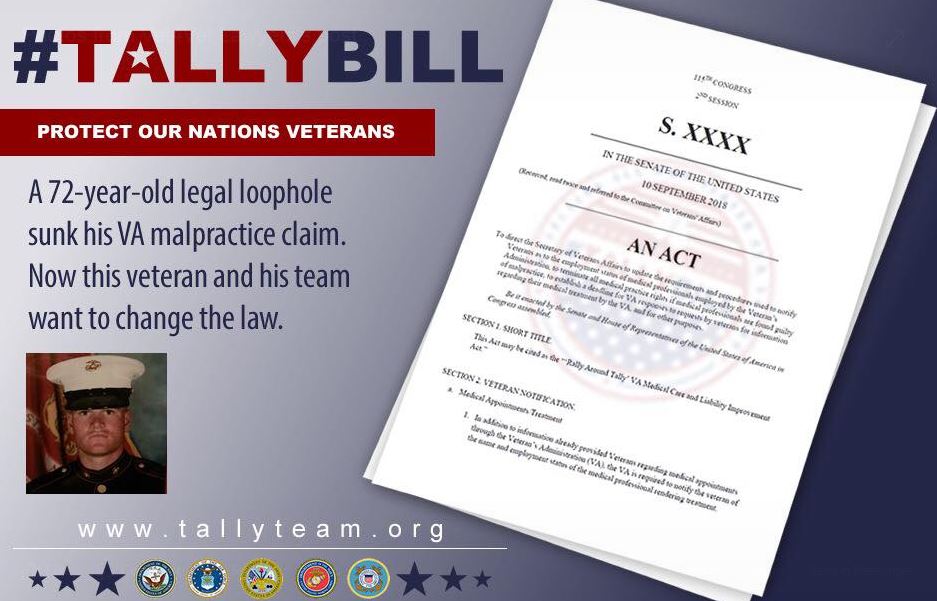 "But the day that they ink my last name into federal law and they name it the 'Tally Bill,' in my eyes, that will be my settlement," Brian said. "At that point, I'll know I did something to protect all these future veterans - and mark my word - they will."