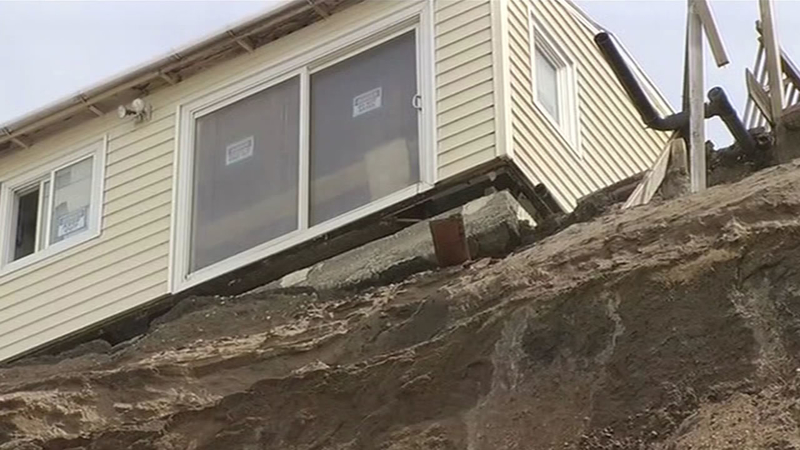 PACIFICA, Calif. (KGO) -- A home in Pacifica where one woman hoped to retire was moved only a short distance on Tuesday.

The coastal cliff proved too much, but she still hopes to preserve the house on Esplanade Avenue.

In #Pacifica this is no ordinary house moving project. pic.twitter.com/mHRE2WblSV

City officials posted a tow-away sign outside the house. "It was move it or lose it," Melissa McConnell said.

This has become no ordinary home improvement project for McConnell and her family.

The price of real estate may be rising elsewhere, but it's falling fast along the El Nino ravaged cliffs of Pacifica. "It was like December, January, boom it's gone, and killed the whole coast in Pacifica," McConnell said.

Just like that 35 feet of patio, stairways and retaining wall were scattered on the beach below.

The teetering house would be next so, Tony Medeiros and Company began the process of separating the structure from its foundation, and moving it inland.

The plan is to raise the house out of harm's way by Wednesday. "20 feet right up to the sidewalk," McConnell said.

Although that will be only half of the process, as McConnell is taking a risk because they're paying thousands of dollars to move the house those 20 feet.

If they can't find a suitable lot, the cliff is likely to catch up, so they're looking for a suitable place. "We're hoping an owner of one of the vacant lots in Pacifica will allow us to buy their lot at a fair market price so we can move the house," McConnell said.

At the edge of an eroding #Pacific cliff, this was move it or lose it due to #elNino pic.twitter.com/oGZRHcZOWf

The home will move 30 feet inland to safety today. Then she needs to find lot. #Pacifica #ElNino #abc7now pic.twitter.com/eRSij22Oxu

There used to be 35 feet of backyard patio, here. That’s what #ElNino did to the place this year. #abc7now pic.twitter.com/eVqcPebQQU