Santa Barbara college students rescued when boat made of buckets, kiddie pools drifts out to sea 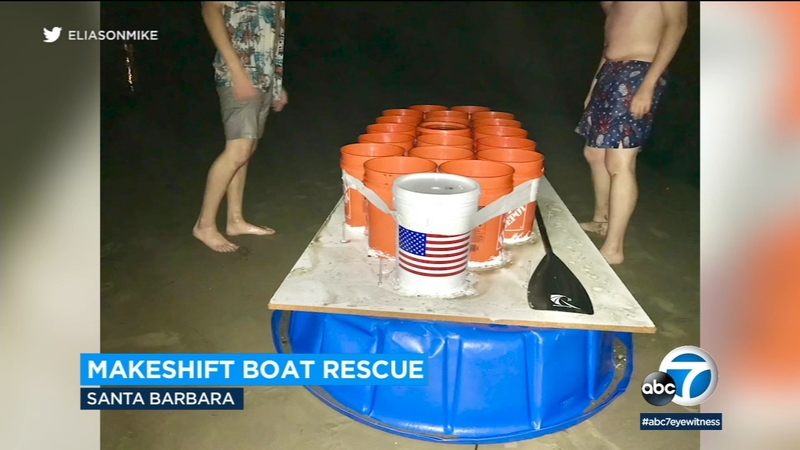 SoCal students rescued when homemade boat drifts out to sea

SANTA BARBARA, Calif. -- Two students in their 20s with more creativity than common sense had to be rescued off the Santa Barbara coast when their homemade boat made from buckets and kiddie pools drifted out into the ocean.

The two men had built their un-seaworthy craft by using duct tape to lash together 20 Home Depot buckets and two plastic kiddie pools on a piece of plywood.

They went out on the water off Isla Vista around 2 a.m. Saturday.

If Nautical Nonsense Is Something You Wish-Two male students in their 20’s were rescued unharmed at 2:37 a.m. Sat off Isla Vista after they were unable to return to shore in their boat fashioned from duct tape, buckets, and kiddie pools. Alcohol was not a factor. *Call Newsline* pic.twitter.com/Ug568BY9EF

They had a paddle but no wetsuits. It didn't take long before the tide had pushed their "boat" out too far from shore and they were unable to make their way back, the San Luis Obispo Tribune reported.

Fortunately someone spotted them floating out on the water before they got too far. Authorities were notified and they were rescued within about 30 minutes.

No alcohol was involved, says the Santa Barbara County Fire Department, which referred to the incident as "Nautical Nonsense."