'They would rather sleep outside': Howard University students protest 'unlivable' dorm conditions

Students told ABC News that some dorm rooms have mold and insect and rodent infestations, as well as leaky ceilings and flooding.
ABCNews
By Briana Stewart and Jade Lawson 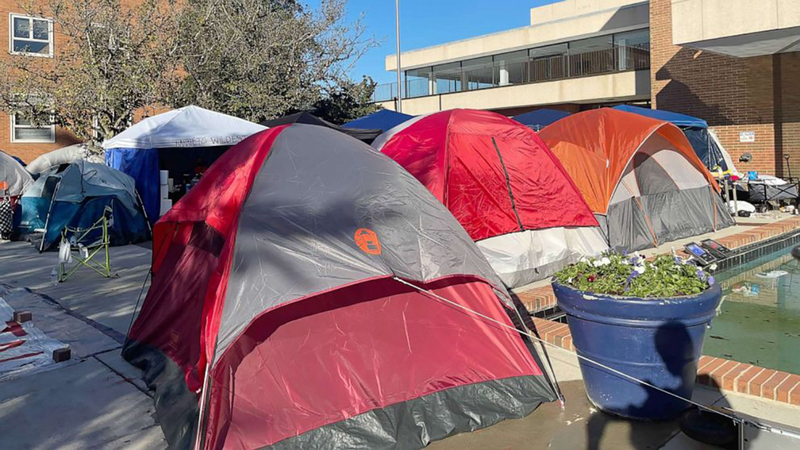 Howard U students are camping out protesting over housing conditions

WASHINGTON -- Dozens of Howard University students are sleeping outdoors in a tent encampment on campus grounds to protest what they describe as "poor" and "unlivable" conditions in the college dormitories.

Students told ABC News that portions of the university living quarters have mold and insect and rodent infestations, as well as leaky ceilings and flooding -- all of which they say put their health at risk.

Lamiya Murray, an 18-year-old freshman currently living in one of the tents, believes the mold that she said she spotted in her dorm room was responsible for a respiratory infection she battled earlier this year.

"I'm not going to say that I expect a lot more, I expect the bare minimum. I expect decent housing," Murray told ABC News. "I expect to be in a space where I will feel safe and secure, but the dorms became a health hazard. I was waking up every morning with a cough that I didn't go to sleep with the night before, and struggling to breathe at night."

@HowardU IM PISSED. OVER 24 hours and NO change. IVE BEEN BREATHING THIS IN. mold has been growing under my microwave, on my mattress. in my closet. on my suitcase. behind my mirror. in my FRIDGE. i am taking legal actions and i’ll be damned if anyone stops me. @fox5dc pic.twitter.com/euJlWdZQAx

Since Oct. 12, Murray and other student demonstrators have taken over the Blackburn University Center, a student hub and cafeteria located in the central yard of the campus. Organizers said they are not allowing administrators inside the Blackburn building.

One day after the protest began, on Oct. 13, the Howard University Division of Student Affairs issued a warning to protesters occupying the Blackburn University Center, citing the demonstrators for multiple violations of the university's student code of conduct.

"You will proceed through a student conduct hearing and face consequences up to and including expulsion from the University. The judicial process will be conducted within the procedures of the Student Code of Conduct," Cynthia Evers, vice president for student affairs, wrote in an email to students, obtained by ABC News.

"We take great pride in Howard students leading the nation in public and private fights for justice and equality in all corners of the nation and, in fact, the world," the email continued. "However, there is a marked delineation between historic protests and what we witnessed yesterday [Oct. 12]. The University looks to fully preserve the integrity and authenticity of students' constitutionally guaranteed rights of free speech and assembly while protecting against the weaponization of these rights as false representations of the Howard student experience at large."

Outside the building, a banner draped across the sidewalk reads: "Enough is enough." A number of students told ABC News they would rather sleep outside than in their dorm rooms.

Fellow student protesters took turns guarding the door of the center, where some demonstrators inside could be seen through the window resting in sleeping bags, studying or eating food donated by alumni and local civil rights groups who visited them in support of their cause.

"All of our Blackburn family is allowed in and out of the building," Murray said, telling ABC News they are not allowing administrators or press into the building. "It's the outsiders that we're worried about. We're trying to keep students safe and keep everybody in an atmosphere where they feel comfortable to express the things that are happening on campus."

"if you really support Black Colleges, share this, support us!" #BlackburnTakeover pic.twitter.com/2l4giD3NGh

The sit-in, organized by the Young Democratic Socialists of America and The Live Movement, has gone viral under the hashtag #BlackburnTakeover. The tweets have garnered attention from celebrities, including artists from rapper Gucci Mane's 1017 record label, who pulled out of performing at Howard University's homecoming this weekend. Students at other historically Black colleges and universities have also shared videos and pictures on social media of alleged low-quality living conditions at their schools.

"There are students whose belongings were lost, or have been destroyed by floods, by mold, by all types of insufficient living conditions and it's hurtful. Even if you're not the person who is experiencing that, just listening and taking it in, with us being a community, it's very hurtful to hear," said Deja Redding, a Howard University graduate student and director of The Live Movement, a campus-based organization focused on advocating for racial equity in education. 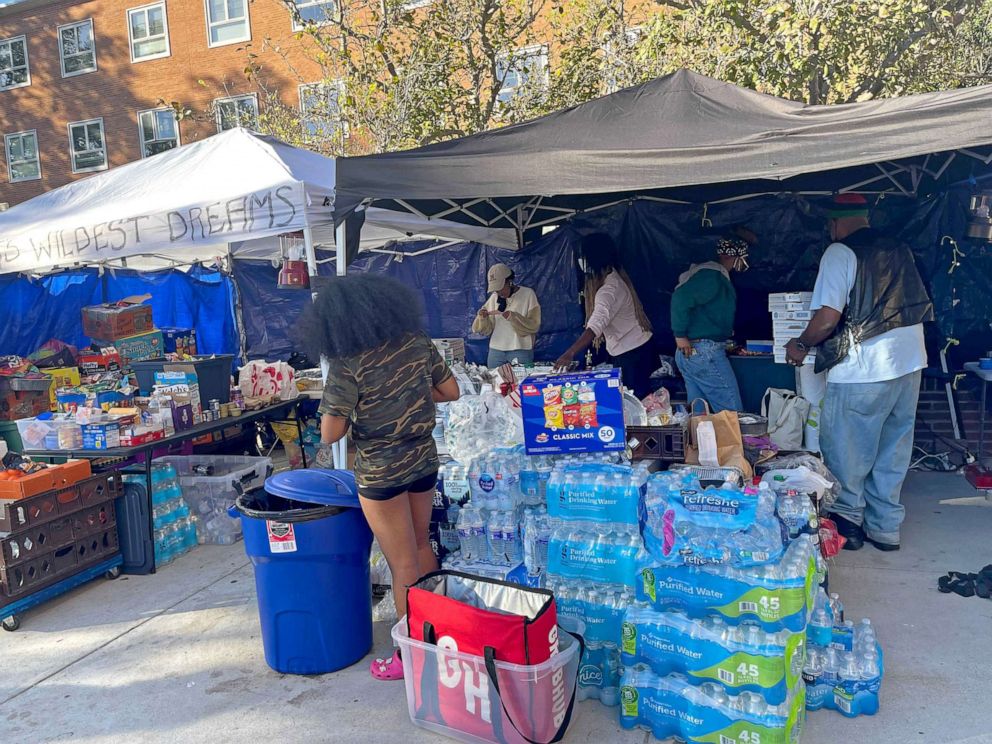 Alumni and local community members provided an outdoor pantry with food, water and other resources for Howard University students who set up a tent encampment on their Washington, D.C. campus, on Oct. 21, 2021. The students are protesting what they deem "dangerous" and "unlivable" housing conditions in their campus dormitories. (Briana Stewart)

There have been 34 reports of concerns related to discoloration, or suspected fungal growth, across more than 5,050 beds. This represents 0.67% of the total on-campus beds, according to Howard University officials.

"The well-being of our students is always one of Howard University's top concerns, and we always support students' right to peacefully protest. The administration is actively addressing the concerns students have shared. While there have only been a small number of documented reports, we are actively seeking out any issues that may be in the dorms by going door to door to address each room," Frank Tramble, vice president of communications and chief communications officer at Howard University, said in a statement to ABC News.

Tramble said cabinet members of the university administration have personally visited the campus housing facilities to survey dorms. He also said students impacted have been placed in temporary housing as the university works to address the issues.

"We also remind students to submit a maintenance request so we can address each situation and ensure our students' living conditions are safe and habitable. We care about our students and are working to ensure that we are finding, addressing, and remediating any issues," Tramble added.

The Howard University Division of Student Affairs also acknowledged the presence of mold in select residence halls in an email sent to the students, but assured them that the issue is not widespread.

"There have been rooms in select residence halls that were affected by mold growth. The University's response held the third-party vendor fully accountable, and they are conducting mold remediation and HVAC duct cleaning in the impacted rooms, and throughout the building as part of third quarter preventive maintenance," Evers said to students in the email statement.

"Long, hot, wet summers, record-high temperatures and humidity are environmental factors that create the climatic conditions that foster mold growth. We have listened to our students' concerns, and we have been responsive," Evers added.

However, some students believe the damage may be more widespread than officially reported.

Demonstrators are demanding a town hall with Howard University President Wayne Frederick. They are also pressuring the administration to reinstate students, faculty and alumni on the university board of trustees, who were previously removed from their positions after the university voted unanimously in June to restructure the board to improve the process of governance. Students are also asking for a plan of action to improve housing for incoming students, and provide academic and legal immunity for all the students participating in the protest.

"We are not satisfied. What we're hearing is all talk. We're waiting for those actions to be put in place so we can allow Howard to have their Blackburn cafeteria back, but until then, we will still be occupying that space until the demands are met," Murray said.

Over the past two years, Howard University has received large donations, including a $40 million donation from billionaire philanthropist Mackenzie Scott, Jeff Bezos' ex-wife, the most significant single donor gift in Howard's history. 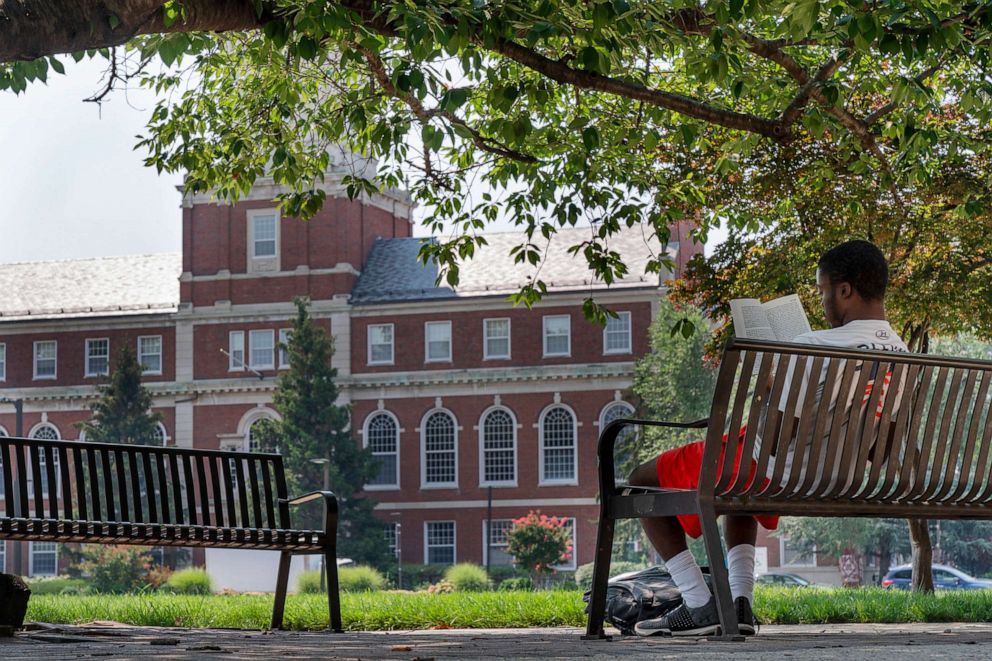 With the Founders Library in the background, a young man reads on Howard University campus, July 6, 2021, in Washington. (Jacquelyn Martin/AP, FILE)

In 2020, HBCUs saw a surge in admissions. Howard University experienced a 15.9% increase in fall 2020 applications, according to a press release.

Interest in attending and supporting HBCUs surfaced following the racial reckoning sparked by the killing of George Floyd and resulting protests, according to an Inside Higher Ed report.

At the start of the 2021 school year, Howard students took to social media calling out the deteriorating and limited housing capacity. Howard University has refuted claims of a housing shortage on campus in statements to students and to ABC News.

"Students have reported on social media that there are Howard University students who are homeless. We have a 94 percent occupancy rate at present, which means we have hundreds of available beds to house students. We encourage any student experiencing housing issues to email hureslife@howard.edu for assistance. As we did last year, we will assist with securing housing, and we have continued to maintain and make available the food pantry on campus for students who are food insecure," Tramble told ABC News.

"It does not matter what happens, we will always find a way to persevere through this," Redding said.