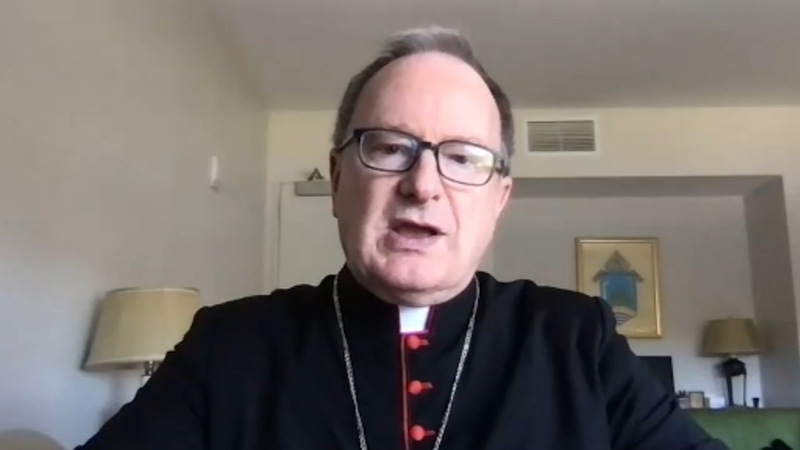 'I was terrified': Oakland's Catholic Bishop robbed at gunpoint

OAKLAND, Calif. (KGO) -- The Oakland Police Department has launched an investigation after the city's Catholic Bishop was robbed at gunpoint last Saturday a few blocks from his church.

"A man pulled a gun on me and said give me your wallet," said Michael Barber, the Bishop of the Catholic Diocese of Oakland. "I was terrified, I was afraid, I thought 'maybe this is it.'"

Last Saturday, Barber was walking with his rosary around the Cathedral of Christ the Light Church just north of downtown. He noticed a young man following him right in front of the Paramount Theatre on 21st and Broadway.

"That's when I got a little suspicious," he said. "Thought I better turn back and head toward home but I didn't make it."

Within seconds, Barber says the young man slammed the gun onto his face.

Bishop said he was alone on the street, there were no cars that passed during the five minute encounter. He prayed to God, expecting the worst.

"I had just given a sermon that morning, I ordained two new priests in the Cathedral and my sermon was about a Good Shepard who lays down his life for his sheep... go figure, you know," said Barber.

Barber says the robber was young, maybe in his early 20s and rode away on his bike.

"Right now, the gun violence is out of control," said Oakland City Councilman Noel Gallo. "We're killing each other, I live in an area where I see gang activity grow."

Oakland Police reports the city has seen a 50 percent increase in armed robberies this year compared to 2020. The department issued a statement encouraging the public 'if you see something, say something.'

"Parishioners have come up to me after mass this weekend in the Cathedral," Barber said. "One lady said three guys car jacked her and she was terrified. Another lady said her window had been smashed while she had been in Church... poor Oakland."

As for Barber, as scared as he was, he still plans to forgive.

"I have to forgive him," he said. "I'm supposed to react like Jesus did, and I keep thinking, gee I hope they catch that guy, I hope he doesn't rob somebody else."