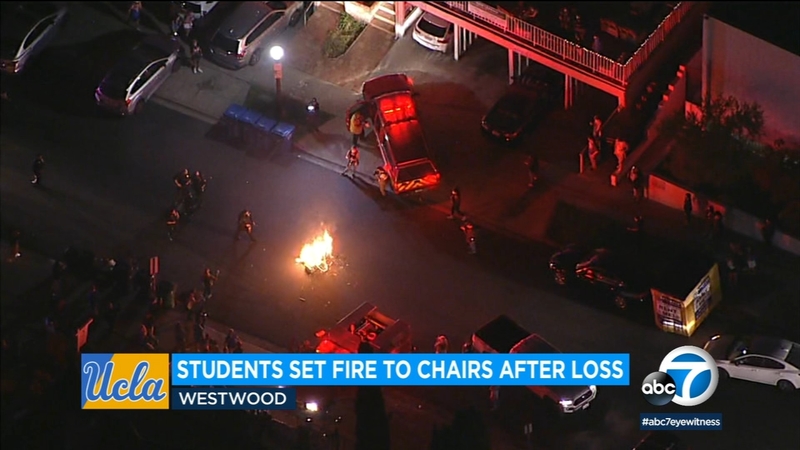 INDIANAPOLIS -- Three dribbles, 55 feet and one of the greatest shots in NCAA tournament and Final Four history.

UCLA's Johnny Juzang scored with 3.3 seconds left to tie the score, and Gonzaga coach Mark Few elected not to call a timeout. Bulldogs forward Corey Kispert grabbed the ball out of the net, while Jalen Suggs began to curl toward the ball to catch it on the run.

Kispert threw the ball in bounds to Suggs, who took three dribbles and pulled up from about 40 feet to bank in a buzzer-beating 3 to give Gonzaga a 93-90 overtime win over the 11-seed Bruins on Saturday at Lucas Oil Stadium, advancing the Bulldogs to Monday's national championship game against Baylor. 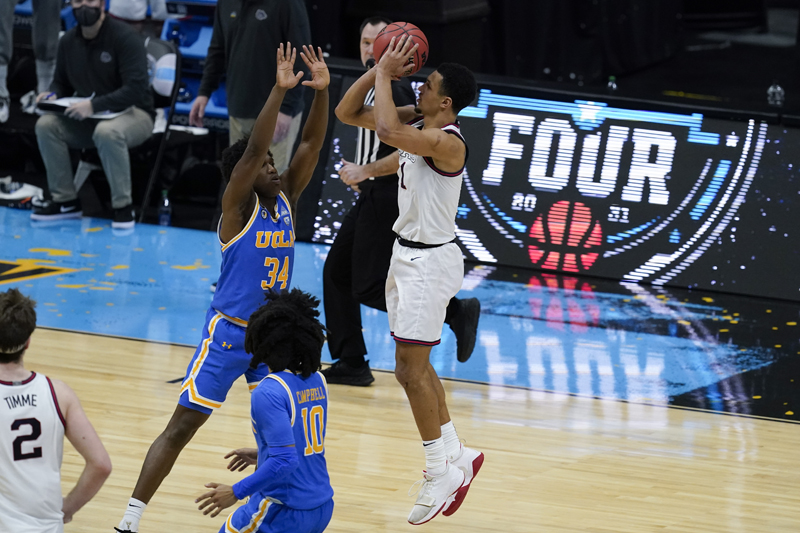 Suggs fist-pumped into the air and sprinted to the scorer's table as his teammates mobbed him.

🗣 The radio call. You have to listen. @VoiceofGonzaga & Adam Morrisonpic.twitter.com/HpXwAtlme3

"I've always wanted to run up on the table like Kobe and D-Wade and go like that, and that's the first thing I did," said Suggs, Gonzaga's star guard. "Man, that is something that you practice on your mini-hoop as a kid or in the gym just messing around. And to be able to do that, it's crazy."

"I've always wanted to run on the table like Kobe or @DwyaneWade to celebrate." @JalenSuggs2020 on his EPIC buzzer-beater for @zagmbb #FinalFour pic.twitter.com/RI6FsRd8kh 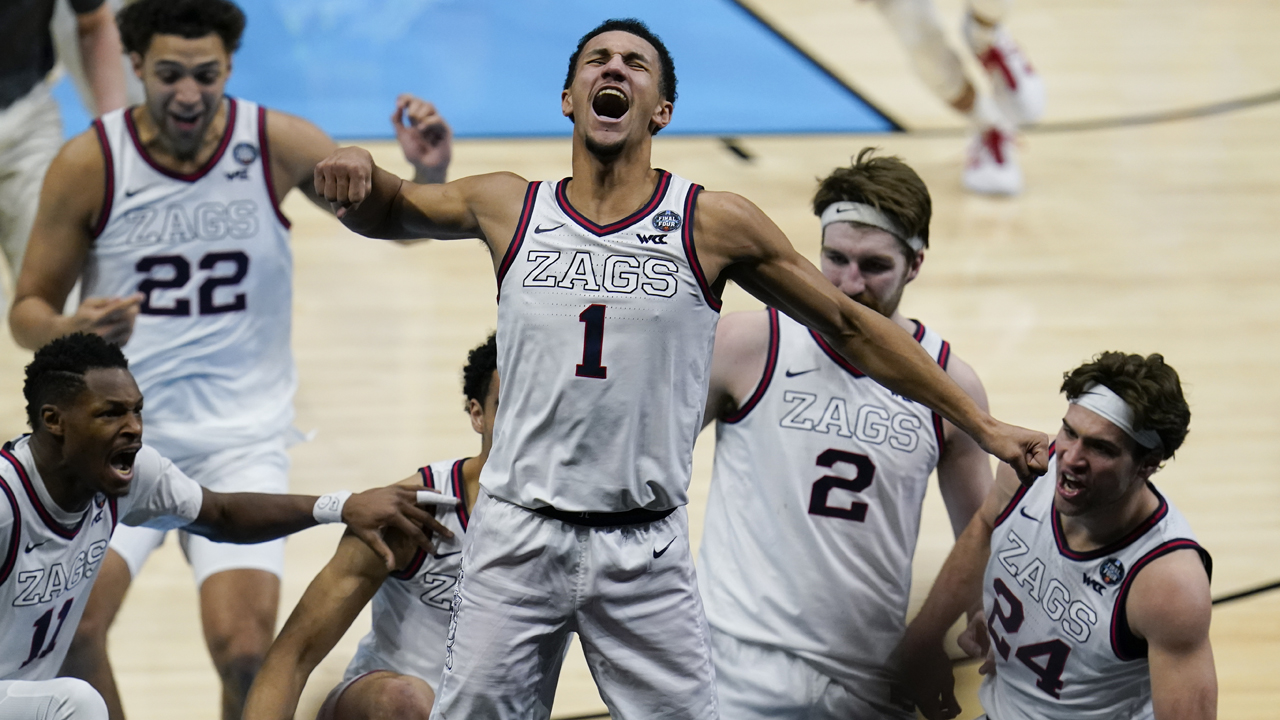 "It helps when you have a magical, special guy like Jalen," Few said.

One of the best games I’ve seen in a very long time!!

I see you Suggs! #Zags #finalfour2021 What a game! https://t.co/fIYtsaJLyR

UCLA's Cinderella run through the NCAA tournament nearly took down another victim, as the Bruins gave Gonzaga (31-0) all it could handle and then some. There were 19 lead changes, and the biggest lead for either team was Gonzaga's seven-point edge in the second half.

The Bulldogs had barely been tested all season, with 29 of their 30 wins entering Saturday coming by double digits. It was clear from the outset that wouldn't be the case in the national semifinals.

UCLA matched Gonzaga basket for basket in the first half, even taking a six-point lead with 4 minutes, 55 seconds remaining until halftime. Bruins coach Mick Cronin once again had a masterclass in game planning, limiting Gonzaga's transition opportunities and refusing to push the ball on fast breaks, even when the Bruins might have had an advantage. They ran the shot clock down on nearly every possession and made tough shots all night.

Before his buzzer shot, Suggs had already made a case for the play of the tournament. With two minutes left in regulation, he came from behind and blocked what looked like an easy basket for Cody Riley. He kept the ball inbounds, then pushed it upcourt before threading the needle with a one-handed bounce pass to Drew Timme for a dunk. Instead of a two-point deficit, Gonzaga had a two-point lead.

"I couldn't give him a free bucket," Suggs said of Riley. "Either I was going to find him at the line or make a play on the ball. I went to the corner -- it was tough to get it. I got it. I saw Drew running, and Tyger Campbell is fast. I wanted to throw it. It looked wide open. And then as soon as I let it go out of my hands, he had like another gear. It made it a lot closer than I wanted it to be. I knew Coach was maybe a little pissed that I made the pass, but it got through."

"He's a hell of a player. I mean, he's electric," Few said of Suggs. "Especially when you get him out in transition. He's confident enough. And to make that pass to Timme. When I saw him sizing it up, I was not thinking it was going to be one of his greatest decisions he's ever had. But he's got a knack for just fitting things into small windows."

Juzang was again outstanding for UCLA, continuing the stellar stretch he has had all NCAA tournament. He was unguardable at times, finishing with 29 points, the fourth time in the tournament he has scored at least 23 points. And it looked like he might deliver another shocking upset win over a 1-seed late in regulation when he drove the lane and drew a whistle with 1.1 seconds left. But instead of a fifth foul on Timme, it was a charge on Juzang and five more minutes to play.

"[Timme is] our best charge-taker by far. I mean, I don't know how I felt about that, with four fouls," Few said. "But he took it, God bless him, and it was a big play."

Timme was exceptional in the extra period, scoring Gonzaga's first six points to give the Bulldogs some breathing room. But as it did all game, UCLA kept fighting and had possession following a missed 3 by Kispert with 22 seconds left.

Juzang drove the lane and missed a runner, but he got his own miss and put it back to tie the score with 3.3 seconds left. Gonzaga had one timeout remaining, but Few wasn't going to use it. Suggs made one of the greatest shots in NCAA tournament history and sent the Zags to Monday night's title game.

"I knew we were good because it was in Jalen's hands," Few said. "He makes shots. He's got that magical aura. He makes them in practice all the time. It's been crazy this year how many he's made in practice, last-second shots. I felt pretty good. I was staring right at it. And I said, 'It's in.' And it was."

"It skyrockets above that," said Suggs, who could barely contain his joy in the postgame news conference. "I mean, it was nuts. And I still can't speak. I have so many things going on in my head. I just can't believe that happened. I don't think it's really going to hit me until I wake up tomorrow. Tonight was special.

"When dreams start to become realities and you're able to experience those things, it's special," he later added. "And those are things you've got to cherish. You're never going to get another moment like this. You'll never be able to relive this."

So now on Monday, we get the game college basketball has wanted since the season began, the game we were denied in early December because of COVID-19:Gonzaga vs. Baylor.

It will be the first time since 2005 the top two teams on the NCAA tournament's 1-68 seed list will face each other in the national championship game.

"I think now they're back playing the way they were earlier this year," Few said. "And so well coached. Stepping up, making shots. Playing great defense. ... We've got to get ready for a terrific Baylor team. And we're going to have to play great."

Forty minutes to perfection and a place in history.