James Comey says Robert Mueller is 'not on anybody's side' 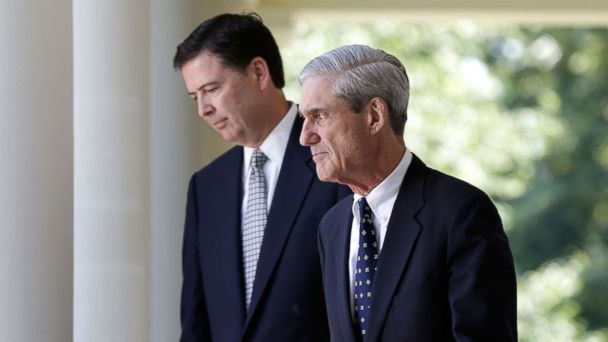 The drama surrounding his firing while he was overseeing the Russian interference investigation left James Comey concerned about the motives of President Donald Trump, but one person he has faith in is special counsel Robert Mueller.

"The American people can have complete confidence in Robert Mueller," Comey said.

"He's not on anybody's side. He does not care about anything except the truth," he said, adding that the American public "can have great confidence if Bob Mueller is left in place to do his job, he will find the truth."

Comey discussed his decades-long history with Mueller during his exclusive interview with ABC News' chief anchor George Stephanopoulos ahead of the April 17 release of Comey's book "A Higher Loyalty: Truth, Lies, and Leadership."

"He and I are not close friends, but I've known him and watched his work," Comey said of Mueller.

"I think we played golf once in our 25 years. And I've had dinner with him maybe once or twice. So I know him and ... we're friendly. But I know his work most of all. And I've watched it closely," Comey said.

Comey's account of his relationship with Mueller is somewhat less effusive than it had been in years past. Both Comey and Mueller praised one another publicly before, specifically when Comey succeeded him in 2013 as director of the Federal Bureau of Investigation.

Comey said that in taking on the role he would "be standing truly on the shoulders of a giant, someone who has made a remarkable difference in the life of this country." And Mueller, in turn, called Comey "a man of honest, dedication and integrity."

Trump picked up on their relationship and took it on as a point of concern after Mueller was appointed as special counsel, telling Fox News in June 2017 that Mueller is "very, very good friends with Comey, which is very bothersome."

One instance where Comey saw Mueller at work came at a pivotal moment during which he believed the integrity of the Justice Department was at stake.

In 2004, Comey was the acting-Attorney General because then-Attorney General John Ashcroft was gravely ill. Comey told then-President George W. Bush's team that the Department of Justice had found that their authorization of certain surveillance programs was not legally justified and it would not be recertified.

In spite of Comey telling then-Vice President Dick Cheney of that decision, two top White House officials tried to pressure Ashcroft to reauthorize the surveillance program when he was in intensive care in a Washington, D.C., hospital. Comey told Stephanopoulos that Ashcroft summoned the power to turn the White House officials down when they arrived at his bedside.

Mueller was the FBI director at the time, and the agency was "a key participant in the program," Comey recalled, summarizing Mueller's view as "if the Justice Department can't find a lawful basis for this, there's no way the FBI is participating."

"So I called Bob and told him what was happening" at the hospital, Comey told Stephanopoulos. "And I wanted him to know about it because of his stature and his ability. He and I weren't close, we weren't friends in any social sense. But I knew he saw it the way I did. And I knew that his gravitas, his experience, his weight, would be important. And he said, 'I'll be right there.'"

Mueller arrived at the hospital after the White House officials had left.

"He came in moments later and he stood and leaned down and spoke to the desperately ill attorney general and told him that, in every man's life, there comes a time when the good Lord tests him. And then he said, 'You've passed your test tonight,'" Comey recounted.

"I was overcome with emotion hearing that. And had this sense that the law held. The law held. It felt like a dream to me, that we were in a hospital room with senior officials trying to get the desperately ill attorney general to sign something. But it wasn't a dream. And the law held," he said.

Mueller appointed as special counsel to the Russia investigation

Mueller was named as the special counsel on May 17, 2017, eight days after Comey was fired. While the firing may have been unexpected and unwanted, one thing Comey wanted in the aftermath was the appointment of a special prosecutor, he told Stephanopoulos.

Comey said it was after Trump tweeted on May 12, 2017 - that "Comey better hope there are no 'tapes' of our conversations" - that he realized it would be vital for someone independent to get involved.

"I woke up in the middle of the night and the thought hit me like a lightning bolt, like, 'Wait a minute. If there are tapes, he will be heard on that tape in the Oval Office asking me to let it go,'" he said, referring to his allegation that Trump asked him to drop the investigation into his former National Security Advisor, Michael Flynn.

According to Comey, the alleged request from Trump happened on Feb. 14, 2017, during a meeting in the Oval Office. Comey said asked everyone else to leave the room, and after they had gone said, with reference to the Flynn investigation, "I hope you can let it go."

"I took it as a direction," Comey said. "He's-- his words were, though, 'I hope you can let it go.' But the context where I've been-- where everyone's been kicked out, and it was just the two of us, the President of the United States, I took the expression of hope as, 'This is what I want you to do.'"

Trump has since denied asking Comey that, both directly denying it during a June 2017 press conference and then calling it a "Comey lie" in a December 2017 tweet.

When Stephanopoulos asked Comey if the alleged request was an example of Trump obstructing justice, Comey replied "possibly."

"I mean, it's certainly some evidence of obstruction of justice. It would depend, and I'm just a witness in this case, not the investigator or prosecutor, It would depend upon other things that reflected on his intent," Comey said.

Comey has confidence in the FBI to investigate the alleged tapes, but doesn't "trust the leadership of the Department of Justice to do it."

Rosenstein wrote a letter that was cited initially by both Sessions and the White House in the firing of Comey. The letter said the department "cannot defend the Director's handling of the conclusion of the investigation of Secretary Clinton's emails," which Comey repeatedly told Stephanopoulos he viewed as a false pretense for his firing.

Because of that lack of confidence, Comey decided to have a friend share information from a copy of the unclassified memo he wrote after Trump's controversial request and have the friend pass some of that information to a reporter.

The New York Times first reported on Comey's memo on May 16, and Mueller was appointed as special counsel the next day. It wasn't until June 22, however, that Trump tweeted he had "no idea" if the 'tapes' he referenced existed and wrote, "I did not make, and do not have, any such recordings."

What happens now with Mueller

"I left a long time ago, and there's a lotta work done since the day I was fired. And so I don't, I have no idea what Bob Mueller has," Comey said.

"What we were trying to investigate at the time ... was anyone aiding the Russians, conspiring with the Russians? There's no doubt there was smoke around that. Whether there's fire, I didn't stay long enough to know," he said.

When Stephanopoulos asked Comey if Mueller or his team had interviewed him, he replied: "I'm not gonna talk about my contact with the special counsel."

He acknowledged that he would be free to speak about any such meetings if they did occur but "I also wanna make sure that ... I don't do anything that might get in the way of their ability to be effective."

"I don't know whether Bob Mueller and his people will conclude that President Trump committed a crime or not. I don't really care, so long as it's done in the right way, confidently, honestly and independently," Comey said.

"And I know the FBI would be that way, and now I know the prosecutors will be that way. And whatever they find, the American people can rely on because they will find the truth," he added.

"Again, I don't sit here saying ... 'I hope the truth is this,'" Comey told Stephanopoulos. "I just want them to find the truth. And I'm confident that they will, unless he's interfered with in some way."

If Trump tries to fire Mueller, which has been long speculated, Comey said "it would, I hope, set off alarm bells that this is his most serious attack yet on the rule of law."

"It would be something that our entire country -- again, Democrats and Republicans, that is higher than all the normal fights about policy. That is about the values of this country and the rule of law. And it would be to the everlasting shame of partisans if they were unable to see that higher level and to protect it," he said.
Report a correction or typo
Related topics:
abc newsnational
Copyright © 2021 ABC News Internet Ventures.
TOP STORIES
SFGH to give supplemental mRNA vaccine to those who got J&J shot
EXCLUSIVE: SJ businesses targeted by anti-maskers amid surge
Delta variant creates 'tricky path' for Newsom ahead of recall
Bay Area health officers issue new indoor mask mandate
Kaiser Permanente, others announce vaccination requirements
Can a breakthrough infection still lead to long haul COVID-19?
7 On Your Side investigates calamity at California EDD
Show More
CDC COVID map shows areas of high transmission in Bay Area
Epidemiologist explains how effective the COVID-19 vaccine really is
Evictions expected to spike as pandemic moratorium ends
I-580 reopens after police activity closes freeway in both directions
Some areas of South Tahoe closed due to animals with plague
More TOP STORIES News