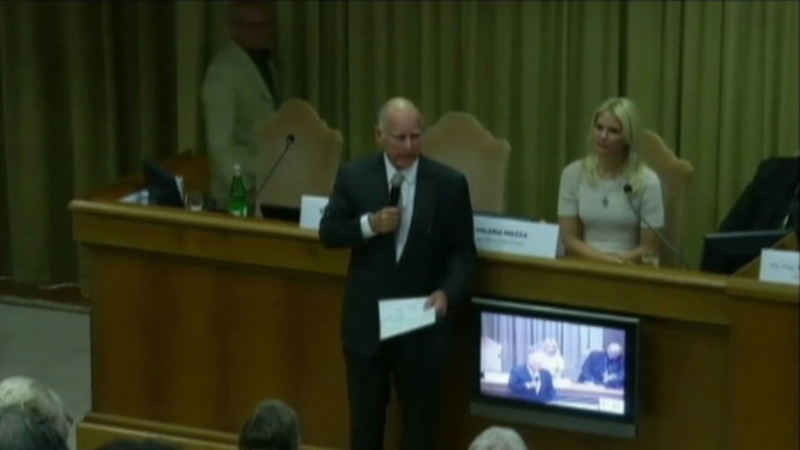 VATICAN CITY -- At the Vatican on Tuesday, Pope Francis took up the issue of climate change, putting a social twist on it. He invited mayors and political leaders from around the world to speak about their experiences and their solutions.

Among those given audience with the pope were Governor Jerry Brown and San Jose Mayor Sam Liccardo.

Gov. Jerry Brown quoted the Bible and had some strong words against climate-change naysayers at the symposium.

It may come as a surprise to some that Pope Francis and the governor would agree that the world needs to take a close look at climate change - though they do approach the topic from two very unique points of view.

"There are too many special interests - and economic interests easily end up trumping the common good," said Pope Francis.

"Climate change affects the poor most adversely. And because it effects them so adversely it drives them to desperate means and desperate measures," St. Mary's College's Brother Charles Hilken said.

The mayors are expected to sign a declaration later Tuesday that states that "human-induced climate change is a scientific reality and its effective control is a moral imperative for humanity," according to the final declaration seen by The Associated Press.

Ahead of the meeting with the pontiff, Brown, who previously studied to be a catholic priest before entering politics, quoted from the Bible to make a case for moving away from the use of fossil fuels.

"God is not mocked for whatsoever a man soweth that he shall also reap and what Saint Paul said in reference to God, we can also say about God's creation. We have heard what we are doing to that creation. What a trillion tons of CO2 and other greenhouse gasses will do," Brown said.

It's not the first time the governor quoted Bible verses in his speeches - but it might have been the first time he used the word "bamboozled" to describe those who believe climate change is not sound science.

"Right in the middle of this problem, we have fierce opposition and blind inertia and that opposition is well financed. Hundreds of millions of dollars going into propaganda, in falsifying the scientific record, bamboozling people of every country, television stations, political parties, think tanks, PHDs, university personnel," Brown said.

Brown's office released a statement saying the governor "wants to light a fire" around the topic.

"We have to get on the side of nature but not abuse it or go against it," Brown said.

The governor went on to testify that California has 40 percent of the electric cars in the United States and boasted the nation's highest fuel emissions and renewable energy building standards. He also set goals for California. He wants to increase our dependence on renewable sources to 50 percent within 15 years.

Brown said taxpayers will not be paying for his trip to Rome.

For all of the green changes in the golden state, California also has been under the worst drought conditions of anywhere in the country.

Climate change supporters ask - what else but global warming could be the cause of such severe weather?

The pope himself received some resistance from one of his own. Australian Cardinal George Pell has criticized the decision to put climate change at the top of the churches' agenda.

Mayors Sam Liccardo of San Jose and Ed Lee of San Francisco used this platform to make a major announcement, leading by example. "Today I am announcing that our city and county of San Francisco will complete the use of petroleum diesel in our municipal fleet. All our fire trucks, all of our municipal busses, all of our heavy duty trucks and replace it with renewable diesel by the end of this year," Lee said.

The climax of Tuesday's inaugural session was an afternoon audience with Pope Francis, who has become a hero to the environmental movement and has used his moral authority and enormous popularity to focus world attention on climate change and its effects on the poor.

Francis' other main priority has been to raise awareness about human trafficking. The Vatican conference is aimed at showing how both are related: The exploitation of the Earth and its most vulnerable people, with global warming often responsible for creating "environmental refugees" forced to flee homes because of drought or other climate-induced natural disasters.