Garoppolo's ankle 'looks good' as he competes with other 49ers quarterbacks 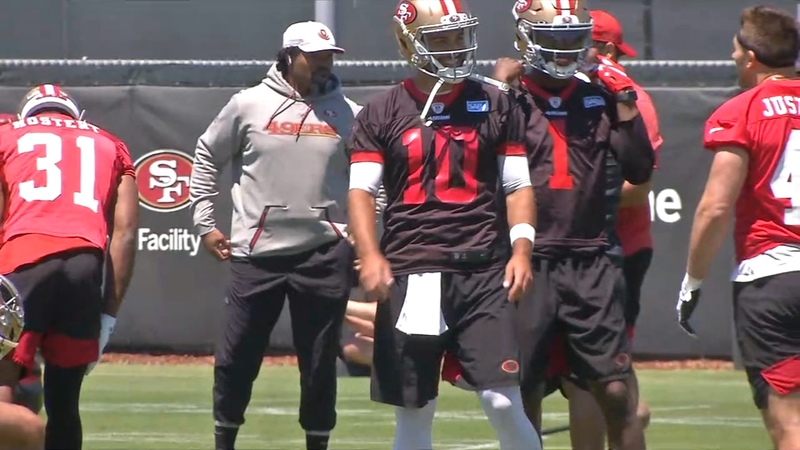 Garoppolo's ankle 'looks good' as he competes at 49ers OTA's

He was also asked if he considered asking for a trade this off-season.

"I mean when it initially happened, there's a million emotions that go through your head," Garoppolo said. "You think of all the possible scenarios and things like that. I want to play football. I want to go out and win games, that's what I do."

Teammate and star tight end George Kittle says despite all the background noise, "Jimmy G" is dialed in.

He spoke highly of his quarterback, saying, "Jimmy G, he's himself. He's feeling good, I don't want to talk for him but he looked great today and he's looked great everyday I've worked out with him so far."

"Like I said, he's slinging that baby and he's still got a nice touch," Kittle said, and then joked, "You can never get past that chin line, so we are feeling good about it."

How can you not be a fan of @gkittle46 ?!? Great to see George Kittle back on Zoom w/ the media today. Here's some of the lighter moments, as it ended with a shoutout to @PredsNHL and a big WOO! #ABC7Now #NFL #NFLTwitter https://t.co/xjReR0D3bz pic.twitter.com/aju1qptUHG

While George Kittle is confident in Garoppolo's chin line, it's the return from a high ankle sprain that has Coach Shanahan's attention.

"Jimmy looks like you guys have always known him. He's been great here these two weeks. His ankle looks totally healed and I haven't even asked him about it because it looks so good," Shanahan said.

As for Trey Lance, so far so good. He's making strides and showing flashes beyond his age.

"He looks a little bit better than a rookie quarterback, you know he's out there slinging it," Kittle said.

But how is Garoppolo feeling about his new competition?

"Trey has been cool. He has," Garoppolo said. "The whole QB room, I mean it's a good group of guys. Everybody has been competing, it's a lot of fun."

Also of note, everyone at @abc7newsbayarea likes to try their @gkittle46 WOO! cc @DionLimTV and Ama! pic.twitter.com/6QcYR7UYv0