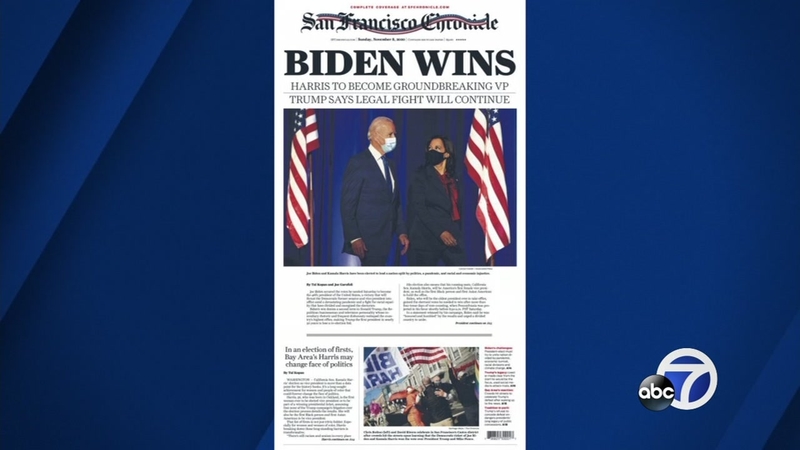 SAN FRANCISCO (KGO) -- If you haven't picked up the Sunday paper this morning, here's a look at the headlines on major newspapers across the U.S. following Joe Biden and Kamala Harris' victory Saturday.

A front page for history: Joe Biden and Kamala Harris celebrated a long-fought victory on Saturday night. In his first speech to the nation as president-elect, Biden promised change and healing.

The Washington Post front page reads "Biden Defeats Trump" with a nod to the vice president-elect saying, "With Harris, he rebuilds the blue wall."

The New York Times went with the headline "Biden Beats Trump" with a reference in the subhead to the events of Pres. Donald Trump's presidency, saying "Chaotic term ends with rare incumbent loss."

Down in Southern California, the front page of the Los Angeles Times read "Biden Wins."

Here's the front page of the Los Angeles Times for Sunday, November 8, 2020. pic.twitter.com/ZKRhT9jfmd

In Biden's hometown of Scranton, Penn., the Scranton Times-Tribune took a more creative approach -- not with its headline, but the front page story itself, saying "A guy from Scranton will be president. His name is Joe Biden."

The Boston Globe referenced the history encompassed in Biden and Harris' win.

FROM THE ARCHIVES: Before becoming vice president-elect in the United States, Kamala Harris had a historic career here in the Bay Area. We take a look back at some highlights, including her take on same-sex marriage and the Affordable Care Act.