Kyle Beach came forward as "John Doe," the former Blackhawks player who filed a lawsuit against the team.

Kyle Beach revealed himself in an emotional interview on TSN, saying he felt "relief and vindication" and "it was no longer my word against everybody else's."

CHICAGO -- Joel Quenneville resigned as coach of the Florida Panthers on Thursday, two days after the second-winningest coach in NHL history was among those implicated for not swiftly responding to allegations by a Chicago Blackhawks player of being sexually assaulted by another coach during the 2010 Stanley Cup playoffs.

The announcement was made shortly after Quenneville met with NHL Commissioner Gary Bettman in New York to discuss his role in the Blackhawks' response to claims from Kyle Beach that he was sexually assaulted by then-Blackhawks assistant Brad Aldrich.

"I admire Kyle Beach for his courage in coming forward, am appalled that he was so poorly supported upon making his initial claim and in the 11 years since, and am sorry for all he has endured," Bettman said.

Andrew Brunette -- an assistant coach under Quenneville in Florida -- was hired as the team's interim coach, and is expected to make his debut when the unbeaten Panthers play at Detroit on Friday night. Brunette has never been a head coach.

Quenneville resigned with about three years and $15 million remaining on his contract with the Panthers. In a statement released to TSN, Quenneville said he resigned "with deep regret and contrition."

"I want to express my sorrow for the pain this young man, Kyle Beach, has suffered. My former team, the Blackhawks, failed Kyle and I own my share of that," Quenneville said. "I want to reflect on how all of this happened and take the time to educate myself on ensuring hockey spaces are safe for everyone."

Bettman said he agreed with Quenneville's decision to resign. If the 63-year-old Quenneville ever wants to return to the NHL, Bettman said the league would need to meet with him first and approve his hiring.

"Joel made the decision to resign and the Florida Panthers accepted that resignation," Panthers President Matthew Caldwell said.

The fallout likely isn't over. Bettman will meet Friday with Winnipeg Jets general manager Kevin Cheveldayoff, who also worked for the Blackhawks when Beach made his allegations.

"Joel Quenneville made a decision to resign his position with the Florida Panthers and as association we understand and respect the decision that has been taken," a statement from the NHL Coaches Association said. "This decision is only one step in a long journey we must take together - one that must include learning from the incredibly painful experiences of Kyle Beach."

The investigation, which was made public Tuesday, said Quenneville -- who coached Chicago at that time -- and others in the Blackhawks organization did not prioritize addressing Beach's allegations, presumably because they did not want to take away from the team's push toward a championship.

Quenneville has said he was unaware of the allegations until this summer, a stance he reiterated as recently as Wednesday morning. Beach, in an interview that aired Wednesday evening on TSN, said there was "absolutely no way" the then-Blackhawks coach could deny knowing about the allegations.

The Panthers allowed Quenneville to coach Wednesday night in a game that started about an hour after Beach's interview aired. At that point, the team's investigation into what to do and how to proceed was already underway.

"We thank the Panthers' organization for working with us to ensure that a thorough process was followed," Bettman said.

At 7-0-0, the Panthers are off to their best start in the franchise's 28-year history, looking very much like the Stanley Cup contender that Quenneville was hired in 2019 to build.

If they get there, it'll be without him now. Players on Wednesday insisted their focus was solely on the ice; some of the team's leaders like captain Aleksander Barkov and defenseman Aaron Ekblad even said they did not know much about the investigation or the massive fallout.

"It should go without saying that the conduct described in that report is troubling and inexcusable," Caldwell said. "It stands in direct contrast to our values as an organization and what the Florida Panthers stand for. No one should ever have to endure what Kyle Beach experienced during, and long after, his time in Chicago.

"Quite simply, he was failed," Caldwell added. "We praise his bravery and courage in coming forward."

Quenneville is the second-winningest coach in NHL history, his 969 victories trailing only the 1,244 amassed by Scotty Bowman - the father of now-former Blackhawks general manager Stan Bowman, who resigned Tuesday when the investigation's findings were released.

The investigation determined that Quenneville was among those attending a May 23, 2010 meeting regarding Beach's claims. That was the day Chicago won the Western Conference title and moved into the Stanley Cup Final. Chicago won the Cup that season, the first of three titles the Blackhawks won under Quenneville.

"Stan Bowman has quoted Joel Quenneville saying - and this is not a quote, this is my words - saying that the playoffs, the Stanley Cup playoffs and trying to win a Stanley Cup was more important than sexual assault," Beach told TSN. "And I can't believe that. As a human being, I cannot believe that, and I cannot accept that."

Buffalo Sabres coach Don Granato, who considered Quenneville a mentor, said Thursday night that "my only thoughts are for Kyle. ... I really can't think past that." 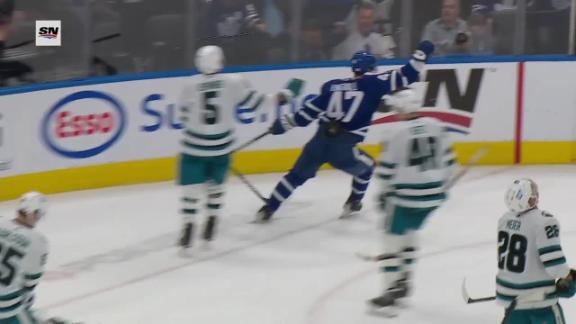 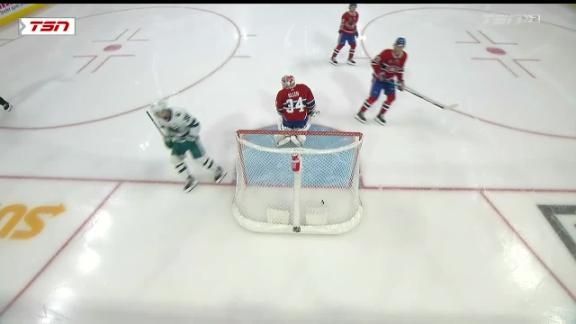 Sharks come into matchup with the Canadiens on losing streak