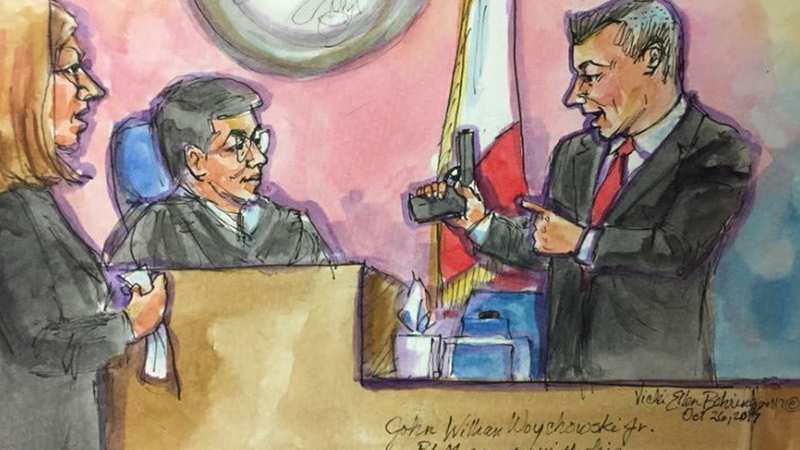 SAN FRANCISCO -- Jurors witnessed a series of tense exchanges between attorneys in San Francisco Superior Court on Thursday as a federal Bureau of Land Management ranger whose stolen gun was used in the fatal shooting of Kate Steinle at Pier 14 two years ago took the stand.

Steinle, a 32-year-old Pleasanton native and South Beach neighborhood resident, was killed by a single gunshot on July 1, 2015, as she walked on the pier with family members.

Defense attorneys in the trial of Jose Ines Garcia Zarate, 45, who is charged with second-degree murder for her death, have argued that the shooting was accidental and occurred after the defendant found the stolen weapon stashed under a seat on the pier.

The gunshot that struck Steinle was a ricochet off the pier, according to evidence presented at the preliminary hearing.

As part of their case, the defense attorneys have placed the actions of Ranger John Woychowski, whose gun was stolen from a car in San Francisco shortly before the shooting, at the center of their case.

Woychowski was off duty and stopping off in San Francisco on a family trip to a temporary posting in Helena, Montana, on the night of June 27, 2015, when the gun was stolen.

Woychowski said he left the gun, a .40-caliber Sig Sauer P239 that served as his secondary duty weapon, in a holster inside a backpack stashed under the front seat of his SUV parked on The Embarcadero near Pier 5 while the family went to dinner. The backpack also contained his badge and law enforcement credentials.

"It appeared to be at the time a safe location," Woychowski said. "It was well-lit and metered and there were other pedestrians in the area, which made me feel safer."

Woychowski said he also spoke to someone he took to be a meter maid or security guard in the area who said he would be patrolling until 11 p.m., and took that as additional assurance his vehicle would be safe.

When he returned, two of the vehicle's windows had been smashed and the backpack with the gun inside was missing.

Prosecutors are not presenting any evidence in the case to indicate that Garcia Zarate stole the gun.

The gun was reported missing to San Francisco police and to Bureau of Land Management officials immediately and Woychowski said the incident was investigated but he was not disciplined for it.

Matt Gonzalez, who is representing Garcia Zarate, pushed hard on Woychowski in cross-examination this morning, questioning why he had left the fully loaded weapon in a backpack in the car and whether his actions were unsafe or against BLM policies.

Gonzalez also attempted to raise the question of whether the person Woychowski took to be a security guard might have been involved in the theft.

However, Judge James Feng has previously ruled to greatly limit the scope of questions that could be asked of Woychowski.

After several attempts by Gonzalez to argue the point, Garcia asked the judge, "Your honor, I'd ask that we not make speeches in front of the jury."

"My speeches are much longer than that," Gonzalez shot back, drawing a laugh from the courtroom.

Woychowski's loss of the gun is also the subject of a federal lawsuit filed by the Steinle family against the Bureau of Land Management.

Steinle's parents originally sued the city of San Francisco as well, alleging that the city's decision to release Garcia Zarate, an undocumented immigrant, from jail without notifying federal immigration authorities played a role in her death.

The city's Sanctuary City policy, which has been the subject of national controversy, sharply limits the circumstances under which local law enforcement can share information with immigration officials.

However, the family's lawsuit against the city and former Sheriff Ross Mirkarimi was thrown out earlier this year.

Guns stolen from law enforcement have been used in several fatal shootings other than the Steinle case in recent years.

Most recently, a gun stolen from a police officer's personal vehicle on Aug. 12 was used in an alleged crime spree that included the fatal shooting of 23-year-old Abel Enrique Esquivel Jr. on Aug. 16 in San Francisco's Mission District.

Three people were arrested in that shooting, which occurred during a robbery.

In Oakland, 27-year-old Antonio Ramos was shot and killed on Sept. 29, 2015, with a gun that had been stolen from an Immigration and Customs Enforcement agent's car weeks earlier. Police arrested 20-year-old Marquise Holloway in connection with the shooting on Nov. 20.

In response to those and other cases, a state law was signed last year requiring that law enforcement officers store guns in a locked trunk or safe box if they are kept in a vehicle. Civilians were already required to store their weapons securely but law enforcement had previously been exempt.

The San Francisco Board of Supervisors also passed an ordinance in February 2016 requiring all weapons left in vehicles to be secured in a locked trunk or lock box, for both civilians and law enforcement.

Testimony in the trial is expected to continue Thursday afternoon.