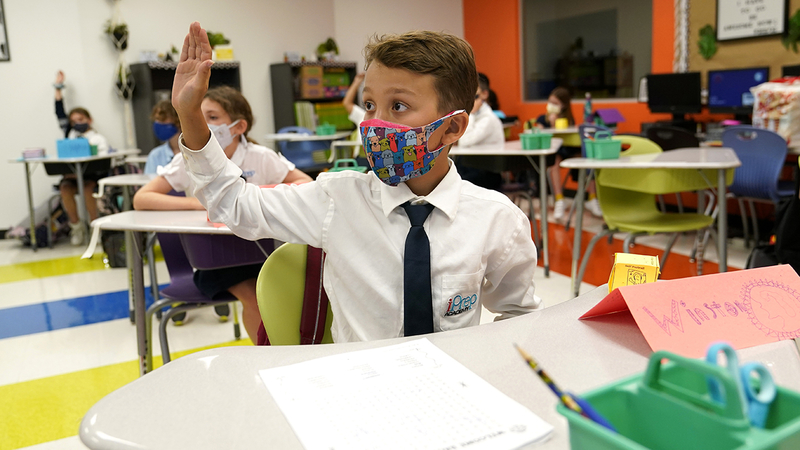 JACKSONVILLE, Fla. -- Florida's Department of Education announced on Monday that it would withhold school board members' salaries in Alachua and Broward counties because of their school mask mandates.

Both counties' school districts said on Tuesday they still plan on requiring masks because of the COVID-19 pandemic and are exploring legal action.

The department's announcement came after a circuit court judge in Florida ruled on Friday that Republican Gov. Ron DeSantis' recent executive order banning school mask mandates overstepped his authority. The Florida Department of Education did not mention the ruling in its announcement.

"We're going to fight to protect parent's (sic) rights to make health care decisions for their children. They know what is best for their children. What's unacceptable is the politicians who have raised their right hands and pledged, under oath, to uphold the Constitution but are not doing so," Florida Commissioner of Education Richard Corcoran said in the department's announcement.

DeSantis had also initially threatened to withhold superintendent's salaries, before admitting that he did not have the ability to do so.

On Aug. 11, DeSantis' press secretary, Christina Pushaw, said the state "could move to withhold the salary of the district superintendent or school board members" as punishment.

"I'm very troubled by the state's action," Alachua County Public Schools Superintendent Dr. Carlee Simon said in a statement to ABC News on Tuesday. "Our School Board members made a courageous decision to protect the health and lives of students, staff and the people of this community, and a court has already ruled they had the legal right to do so. They deserve praise, not penalties."

Simon said that the district has already begun exploring legal action in tandem with other districts.

Broward County Public Schools interim Superintendent Dr. Vickie Cartwright said in a video statement shared by the district on Tuesday that they have consulted with legal advisers and believe they are still complying with state rules even with the mandate.

"The health and the safety of our students, teachers, and staff continues to be our highest priority. As such, we will continue to mandate the mask, knowing that our data ... is demonstrating that the use of the mask is helping to minimize the spread of COVID-19," Cartwright said.

COVID-19 hospitalizations and deaths are on the rise in the U.S. At the same time, more Americans are getting their first dose of the vaccine.

Rosalind Osgood, the chair of the Broward County school board, confirmed on Tuesday to ABC News that Broward County is one of the districts working with Alachua to file a lawsuit.

The state and the counties have fought over mask mandates for weeks. On Aug. 20, Florida's Board of Education gave both counties 48 hours to reverse mask mandates, but both districts refused.

Nationwide debates around mask mandates have escalated recently as the school year begins.

On Monday, the federal Department of Education announced civil rights investigations into five states banning mask mandates. Florida is not one of those states, "because those states' bans on universal indoor masking are not currently being enforced as a result of court orders or other state actions," according to the Education Department.