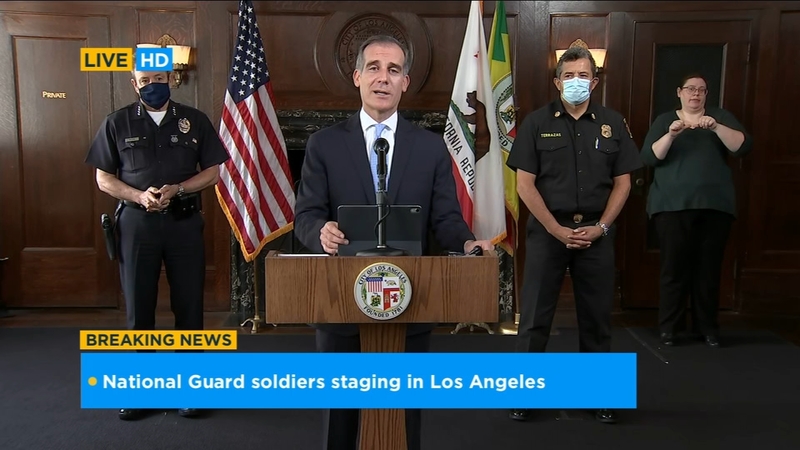 LOS ANGELES -- As Mayor Eric Garcetti extended a curfew for all of Los Angeles, he assured residents that ICE is not part of any city efforts to ensure peaceful protests.

"This is not some excuse to conduct immigration raids. These are folks who are under the command of our Governor Gavin Newsom, not our U.S. military," he said during a Sunday press conference, just hours after the National Guard touched down in the region following violent protests and looting the night before.

Though their deployment to L.A. does not have an end date, Garcetti said he hopes they won't have to stay for very long if things calm down on their own. Their presence was prompted by widespread looting and destruction of property across the city, sparked by frustrations over the death of George Floyd.

"We all saw something that clearly had nothing to do with justice," Garcetti said in regard to the violent protests.

The Los Angeles Police Department said 398 arrests were made Saturday related to the protests. The potential charges include burglary, looting, vandalism, failure to disperse, being a felon in possession of a gun, and numerous curfew violations.

Police Chief Michel Moore said five LAPD officers were injured and two were hospitalized, including one officer who suffered a fractured skull.

Garcetti also appealed for demonstrators to remember that the coronavirus pandemic still presents a serious threat.

"The folks that are out there on these streets should not be a victim of this virus because we're not practicing social distancing,'' he said.

Garcetti and Moore praised the restraint of the city's police force, although Moore acknowledged he saw a few instances of improper techniques as police tried to control the sometimes unruly crowds. Moore said he has been handing out his business card to demonstrators who complained about police conduct over the weekend. The chief said the department will take complaints from anyone who has an accusation of excessive force or unlawful arrests by the LAPD.