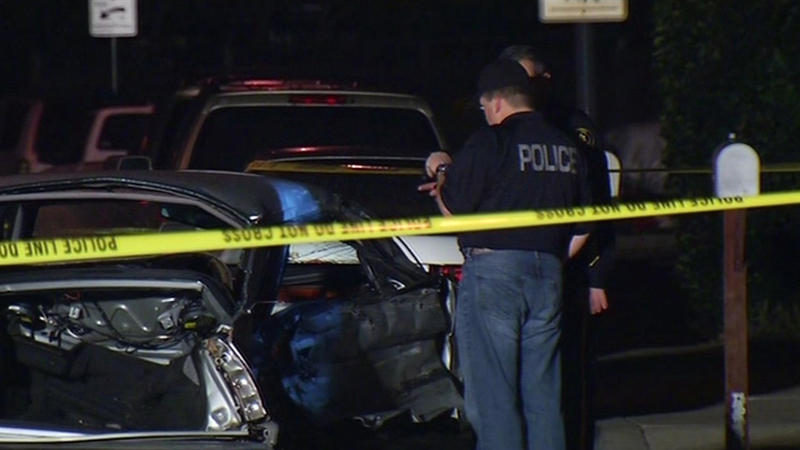 MILPITAS, Calif. (KGO) -- Milpitas police are trying to piece together the relationship between two crime scenes just half a mile apart -- a hit-and-run accident and the discovery of a woman's body.

A Cadillac wanted in a hit-and-run crash was stopped in the middle of Coyote Street with a barrier blocking a devastating discovery -- a female body on the ground.

Police say at around 3:30 this morning a garbage truck and a vehicle got into an accident on Milpitas Boulevard and Abel Street. Police say the driver of the vehicle was able to continue to drive on about a half mile away. The driver made it all the way to Redwood Avenue and took a right turn. The car was able to make it all the way up to Coyote Street and that's where police found her car on fire and her body next to the vehicle.

Officers put the fire out but the female victim died at the scene. They say the Cadillac she was driving was turning left on to Abel Street from North Milpitas Boulevard when it was broadsided by the garbage truck.

The questions police are trying to answer -- who is this woman? Why did she leave the scene of the accident? Officers are investigating if drugs or alcohol are involved and also looking into the possibility she was disoriented after suffering a head injury in the crash.

"That's a possibility, I wouldn't rule that out but without the official investigation done by the coroner's office I couldn't tell conclusively if that was the case," said Milpitas Police Sgt. Dave Morris.

The garbage truck was towed from the scene. That driver wasn't seriously hurt and is cooperating with police.