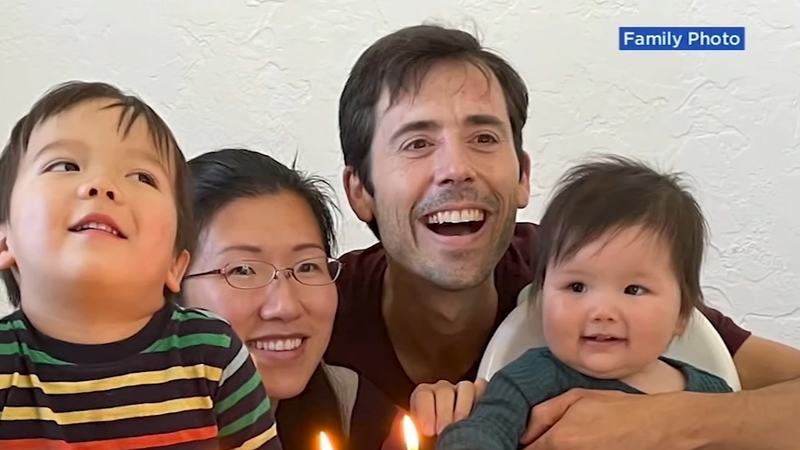 According to the Alameda County Sheriff's Office, there are no signs of foul play or trauma to the body, or any traumatic injuries. Sheriff's Office is awaiting toxicology results but says there is a good chance the cause of death will be undetermined due to decomposition.

The video in the media player and the article below is from a previous report.

The family of the ultramarathoner who appears to have died 200 yards off a trail in Pleasanton spoke out publicly Thursday for the first time at a press conference.

Philip Kreycik's wife and parents showed their strength and love and emotions as they came together to thank the community for holding them up during the three-week-long search for Philip.

"There really are no words to truly express how difficult this is and how much we appreciate everyone's help. Hug your families because you really don't know what is going to happen in the next moment," said Jen Yao, Philip's wife.

The wife of missing Pleasanton runner Philip Kreycik thanked the community for their support after a body matching his description was found.

Kreycik's parents and wife later sat down for a one-on-one interview with ABC7 News reporter Leslie Brinkley and shared their personal anguish.

"It's so easy for something to go wrong. It wasn't that particularly dangerous when he first went out. It did get warm in the afternoon. But one wrong instance let him down the wrong path," said Kreycik's parents, Keith and Marcia.

What appears to be Kreyciks's body clothed in his running gear was found in dense brush on a ridgetop on Aug. 3.

They described the moment they got the call Tuesday that he had been found.

"It broke us, but we had each other. It made us really grateful to the people who persisted even though there was not so much hope," said Marcia.

Jen Yao, Kreycik's wife, talked about the biometric watch on her husbands wrist.

"I think that will give us more insight into where he was and what happened.I want to know but I'm also scared to know," said Yao.

Kreycik and his wife Jen live in Berkeley, yet the community of Pleasanton rallied around them and relentlessly searched the Pleasanton Ridge Regional Park where he went for a run three weeks ago -- even after police stopped looking, saying there was nothing more they could do.

"We especially appreciate the people that have come to support us here. The new friends that I just love. I just love the people we have met here," said Marcia Kreycik, Philip's mother.

Philip Kreycik leaves behind an 11-month-old and a 3-year-old.

"Of course our focus is always on the kids. To make this as gentle for them as possible," said Yao.

She said she hasn't told the 3-year-old yet what happened to his dad but promised "we will tell them stories, we will show them pictures and they will grow up knowing what their father was like."

The Kreycik's have not decided yet if they will have a public memorial. They are still awaiting autopsy results.

Here's the full press conference from officials after a body was found in Pleasanton in the area runner Philip Kreycik went missing.