My son died from positional asphyxia in a car seat. Here's what parents need to know. 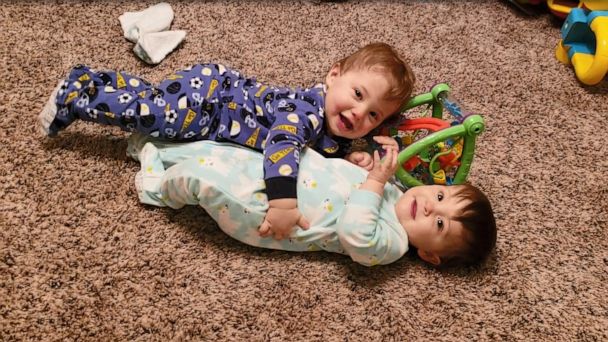 ABCNews
By NICOLE PELLETIERE
It was a normal Thursday morning in January for new mom Rachel Jungling as she took her infant twins to day care.

Both Rachel and her husband, Ryne Jungling, headed to work, and Rachel was on drop-off duty for Anders and Linnea, who were 11 months old at the time. The boy and girl were miracle babies for the Mandan, North Dakota, couple, who struggled with infertility for seven years.

"When we found out we were having twins, other twin parents said, 'It's awesome. You're going to have the most fun.' They were right," Ryne told "Good Morning America."

"Anders, he was the snuggler ... always giving hugs and he really liked being held," he added. "They were pretty inseparable. When they went to bed, if they weren't sleeping, they'd look at each other and make noises until they fell asleep. If Linnea left the room, Anders wasn't OK. He really liked companionship and being around her."

On Jan. 10, Rachel, who was a teacher at the time, brought Anders and Linnea inside their day care facility while strapped into their car seats. Linnea was awake. Anders was close to sleeping.

"With two, Rachel didn't feel comfort leaving one in the car, so she would grab them both in the carriers and bring them in," Ryne said. "It was common practice. Every day, we'd give the day care provider the update -- how they slept the night before, what they ate. [The kids] were usually out of the car seat."

Ryne said the day care provider removed Linnea from her car seat. Anders was still in his car seat when his mother walked out the door.

"Anders looked over at Rachel and Rachel said, 'Bye buddy,'" Ryne said. "He kind of smiled, and she left -- with the assumption that he was going to be taken out of his car seat, and he wasn't."

"It's not something you ever think is going to happen."

A few minutes after 10 a.m., Rachel received a call at work from police.

"They asked her twice, 'Are you sitting down?' And they said they were coming to pick her up and that Anders was being rushed to the hospital," Ryne said.

Ryne, who was also working in education, said his wife called to let him know Anders was being hospitalized.

"She said, something happened to Anders and you need to get to the hospital and I think it's really bad,'" he recalled. "I remember her voice, I never heard it like that. She was really worried, it was tough. She thought it was kind of weird, but she knew it was pretty serious, if something like that was happening."

When Ryne arrived to the hospital he was met by two detectives. Ryne said he learned Anders was left sleeping in his car seat for two hours. The day care provider did not know of the risks involved when leaving a sleeping baby in a car seat, Ryne explained.

Anders was given CPR by the day care provider until paramedics arrived and worked on him for 40 minutes. After 30 minutes in the emergency room, Anders was airlifted from Bismarck to a hospital in Fargo, North Dakota.

"To actually realize what was happening with our son, that was hard," Ryne said. "We prayed a lot that he would get better, that this would all go away. We were praying for a miracle to happen. At the same time, we started to pray that this story would lead to a miracle. Maybe Anders surviving, maybe that wasn't the miracle. Maybe it was preventing this [from happening] to someone else."

On Jan. 12 at 5:45 p.m., after three days on life support, Anders died. An investigation determined he died from positional asphyxia in the car seat after his airway was cut off from his head slumping over and his chin falling into his chest.

"It's not something that you ever think is going to happen," Ryne said. "Everybody describes it as a parent's worst nightmare. I'll definitely agree with that. You feel helpless when you can't do anything for your child. It's hard to say ... but we really think lots of good has come out of this."

"We need this story to get this out there."

After losing Anders, a friend of the couple connected them to Carma Hanson, coordinator of Safe Kids Worldwide's Grand Forks, North Dakota, chapter. The organization's mission is to help prevent unintentional injuries or death to children with five E's: education, encouragement, engineering, enforcement and evaluation.

"Carma immediately was like, 'We need this story to get out there,'" Ryne recalled.

In July, Ryne and Rachel attended the 2019 Safe Kids Worldwide Childhood Injury Prevention Convention where they shared their story with other parents who lost a child through tragic events.

"My heart bleeds for them because I know this is a really difficult time," Lorrie Walker, the technical adviser for Safe Kids, told "GMA." "The fact that they want to help other families is amazing and I can't thank them enough."

Ryne and Rachel now have their own mission to spread awareness about positional asphyxia and overall safe sleep practices for children.

"We know it's not the car seat's fault, it's an education issue," Ryne said. "The old adage of 'Don't wake a sleeping baby' is so wrong when it's not safe sleep."

In 2017, there were 3,600sudden unexpected infant deaths (SUID) in infants less than 1 year old in the U.S., according to the CDC. Of these deaths,1,400 were due tosudden infant death syndrome (SIDS),about 1,300 were unknown causes, and about 900 deaths were due to scenarios involving accidental suffocation (like positional asphyxia) and strangulation in bed.

Besides positional asphyxia, the AAP says deaths can also happen in car seats due to strangulation from straps that are unbuckled or partially buckled.

Edith Bracho-Sanchez, a primary care pediatrician and assistant professor of pediatrics at Columbia University, told "GMA" that this happens when the devices are being used for things like unsupervised naps or soothing.

"The vast majority of these tragic deaths are easily preventable by taking infants out of car seats and strollers when you're no longer traveling and placing them in a crib or bassinet," Bracho-Sanchez said. "This may mean bringing a portable bassinet or crib if the place where parents are going does not have an environment where their babies can continue to sleep safely."

The AAP said babies "should not be placed on in incline to sleep."

"With the head elevated, an infant is in a position that could lead to asphyxia," the AAP noted. "The straps on such products also can strangle infants. In addition, the AAP does not recommend any products for sleep that require restraining a baby, especially if the product also rocks."

"They also need to have parents educate anyone who is taking care of their infant, whether it's a grandparent, babysitter or child care provider, that car seats are not substitutes for cribs and bassinets," he said.

As part of their new safe sleep initiative, Ryne and Rachel, who welcomed a son, Elias, on Oct. 2, helped launch a class for grandparents at Bismarck-Burleigh Public Health on safe sleep, furniture tip-over prevention, nutrition, breastfeeding support and more.

They hope to eventually have car seat manufacturers place a warning directly on their devices, reminding parents and caregivers that it's not for sleeping.

"It's in the pamphlet, but no one reads the instructions besides the installation," Ryne noted.

Here are safe sleep practices from the AAP to prevent sudden infant death syndrome (SIDS), plus how to prevent positional asphyxiation in car seats:

1) Do not use a car seat as an alternative to a crib or bassinet.

As Bracho-Sanchez said, be sure to bring a portable bassinet so babies can continue safe sleep while traveling.

2) Children who fall asleep in a car safety seat while traveling in a motor vehicle should remain in the car seat until travel ends.

3) After reaching a destination, children who are still sleeping should be removed from the car seat and placed in a crib or bassinet.

4) Avoid use of soft bedding, pillows, crib bumpers or stuffed animals inside a child's crib.

5) If you're getting sleepy or tired, put the baby down on the hard surface to avoid risk for injury or death.

6) Share a bedroom with parents, but no co-sleeping, preferably until the baby turns 1 but at least for the first six months. The AAP says that room sharing decreases the risk of SIDS "by as much as 50 percent."

8) Follow car seat manufacturer's guidelines, and make sure the device is installed at a 45-degree angle in the vehicle.

9) Do not place car seats on elevated surfaces or on soft surfaces like a bed, mattress, or couch.

10) Be sure the car seat's shoulder straps and hip straps are positioned tightly, and the chest clip is buckled at under arm level.