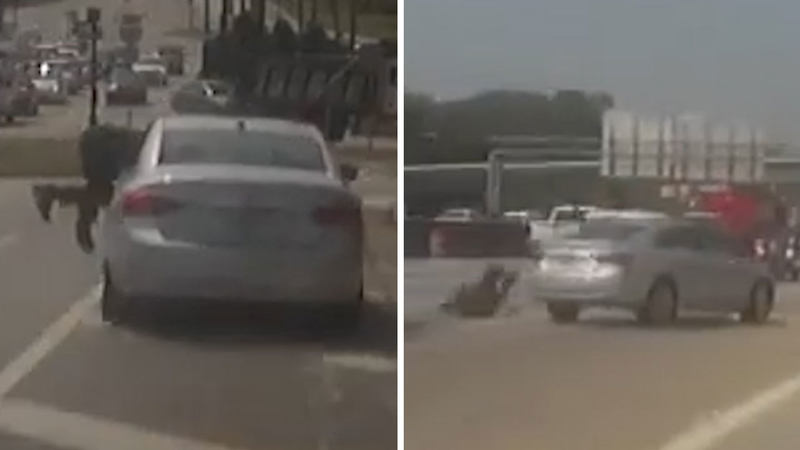 Officer dragged onto freeway during traffic stop, tumbles into traffic

DUNWOODY, Ga. -- A Georgia police officer is recovering after a driver sped away from a traffic stop, dragging the officer as he dangled out the window of the suspect's car and smashing the officer against other vehicles in an apparent attempt to get him off the car.

The scene unfolded in Dunwoody, Georgia, one of Atlanta's northern suburbs, around 11:30 a.m. local time Thursday. According to Sgt. Robert Parsons of the Dunwoody Police Department, officers pulled over Derek Simpson under suspicion of operating a handheld device while driving.

During the traffic stop, Simpson put the vehicle into gear, prompting Officer Nathan Daley to reach into the vehicle to stop the driver from fleeing, police allege.

Dashboard camera footage from another officer's patrol car showed the silver 2019 Chevrolet Malibu allegedly driven by Simpson as it sped away with the lower half of Daley's body dangling out the driver's window.

Officers caught up with the Malibu on the entrance ramp to the 285 Freeway, where police said Daley's body struck another vehicle as the driver of the Malibu passed vehicles waiting to merge onto the interstate.

Once on the freeway, the Malibu swerved, hitting a white truck and knocking Daley off of the car, the footage showed. He's seen tumbling onto the freeway as the Malibu speeds away.

Officers caught up to the Malibu down the freeway after the sedan was apparently involved in a crash with other drivers. Simpson fled on foot into a forested area next to the freeway but was later taken into custody, according to police.

Daley was taken to the hospital, treated and released within hours. He's expected to make a full recovery.

In a video message to the community, Daley was pictured in a hospital gown with several cuts to his face. He said: "It does look as bad as it feels, but you know me, I will bounce back 10 times stronger...I love you guys. Thank you so much for your support."

"I accept donations in the form of sweets," Daley joked.