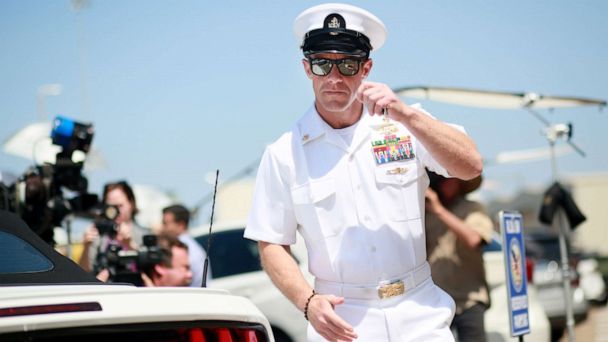 The Navy SEALs who served alongside Special Operations Chief Edward Gallagher described their platoon leader as "freaking evil" and "toxic," according to new video recordings conducted by criminal investigators obtained by the New York Times.

The recordings were part of the Navy's investigation into Gallagher, who was accused of war crimes during a 2017 deployment to Iraq, including the murder of an Islamic State teenager. While Gallagher was acquitted of the most serious charges earlier this year, his case has repeatedly garnered the attention of President Donald Trump who in November intervened in the Navy's own disciplinary process, allowing Gallagher to retain his Trident pin which identifies him as a member of the SEAL community.

In turn, Gallagher has become an outspoken advocate for the president, even meeting with Trump last weekend at his Mar-a-Lago Resort in Palm Beach, Florida.

The video recordings, as well as text messages sent between the SEALs, are part of a New York Times' documentary airing on Hulu that the Times says reveals the anguish and anger the members of SEAL Team 7 experienced when speaking about Gallagher's actions during their deployment.

"You could tell he was perfectly OK with killing anybody that was moving," Special Operator First Class Corey Scott, a medic in the platoon, told the investigators.

The members said they saw Gallagher shoot civilians and fatally stab a wounded ISIS teenager with a hunting knife. Video from a SEAL's helmet camera, also obtained by the Times, shows the teenager laying on the ground surrounded by the SEAL team before the camera is shut off.

However, during the trial, one of the three SEALs who initially said they witnessed Gallagher stab the ISIS teenager said he had in fact suffocated the captive, not Gallagher.

In a phone interview with ABC News on Friday, Gallagher's attorney said the Times chose selectively from the video recordings and text messages which in their entirety show "inconsistencies" in the SEALs' stories and were "extremely helpful" to his defense.

"They paint a false picture because a couple of individuals came together to paint a false story for their own purposes," Timothy Parlatore, Gallagher's attorney, said.

Parlatore, who said he had access to the recordings and texts in the discovery phase of the case, said it was "irresponsible journalism" for the Times to publish parts of the recordings without the larger context of the trial, arguing that additional evidence presented in the courtroom showed some of those SEAL members did not show concern for the ISIS teenager's fate during the incident.

He also claimed that the messages lack proper context and show a level of coordination between the SEAL members against their platoon leader as the court case against Gallagher struggled.

Marc Mukasey, another attorney for Gallagher, told ABC News that the videos "were the product of an incompetent and biased investigation."

"When the lead [Naval Criminal Investigative Service] investigator was finally cross-examined at trial, the jury saw that the investigation was rigged against Eddie and there was no proof to back up the videos," Mukasey said.

"This case is going down the toilet and very fast and these guys are trying to prop each other up so that everybody stays on the same page," Parlatore told ABC News. "That's the text messages that they put out."

However, the Times said the video recordings and texts did not reveal "coordinated deception" and instead "show men who were hesitant to come forward, but who urged one another to resist outside pressure and threats of violence, and to be honest."

The SEALs told investigators they tried repeatedly to report Gallagher's behavior through the chain of command. But when no action was taken, they went to the Naval Criminal Investigative Service, which is how Gallagher was ultimately charged, according to the Times.

"Tell the truth, don't lie or embellish," one SEAL member wrote in the group text in 2017 when they first tried to report Gallagher. "That way, he can't say that we slandered him in any way."

When others questioned what would come of reporting the platoon leader's behavior to commanders, another seal wrote "We just need to give them the truth."

"All in all, technicalities aside, if multiple SEALs over time question another operator's application of the rules of engagement, it's like a forest fire. Where there's smoke, there is fire," he said.

Oehlerich, a former Commanding Officer of a SEAL team, said that a team's senior leadership should be aware of "conflict within the ranks."

"Bottom line, you'll know if you have a problem," he said.

Gallagher was sentenced to four months of time served and a reduction in rank for posing with the ISIS teenager's corpse. But Trump restored the chief's rank to E-7 so that he could retire with full benefits.

It wouldn't be the last time the president worked to interfere on Gallagher's behalf.

The Navy then decided to convene a Trident review board to determine whether Gallagher could keep his Trident pin. While Trump initially tweeted that the Navy "will NOT be taking away" the pin, the White House ultimately told the Navy that the review board could go forward.

However, Defense Secretary Mark Esper said that during this time, Navy Secretary Richard Spencer was trying to cut a backroom deal with the White House that would have allowed Gallagher to retire with the Trident. Spencer was ultimately forced to resign over his handling of the case. Meanwhile, Gallagher was allowed to retire as a Navy SEAL with his Trident pin, a directive issued by the president, Esper said.

When asked for comment on the Times' release of the video recordings and text messages, the Navy referred ABC News to a recent letter from the Chief of Naval Operations Adm. Michael Gilday.

"To be clear, we must be men and women of integrity," he said in the letter to Navy sailors on Dec. 2, just a week after Spencer's forced resignation. "We must be honorable. We must be standard-bearers. We must be above reproach. And we must not give anyone cause to question our fundamental values. That is what sets us apart as a fighting force."

Gilday said later in the letter that "responsibility for ethical and professional behavior must be taken seriously."

"We must own it at every level," Gilday said. "We must be protectors and exemplify our values."
Report a correction or typo
Related topics:
abc newsnational
Copyright © 2020 ABC News Internet Ventures.
More Videos
From CNN Newsource affiliates
TOP STORIES
PG&E Power Shutoffs: Outages to begin Sunday afternoon in Bay Area