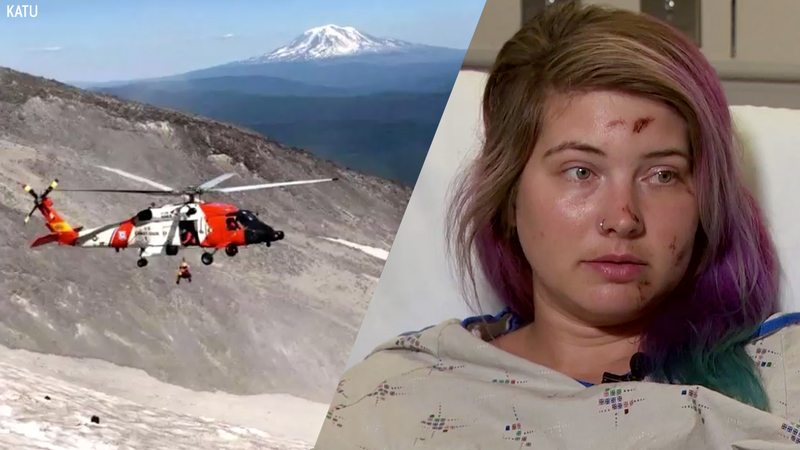 The 32-year-old Omaha, Nebraska native and Navy veteran lost her footing while climbing the 8,663-foot volcano in Washington state.

"The first thing that hit the boulder was my hip," Fintel told KATU. "Then I flipped over that and hit my head, and then kept literally rolling down until I naturally stopped."

Fintel's German Shepherd, named Indie, was the first to reach her after the fall. She said Indie helped by laying beside her and comforting her.

A nurse and search and rescue volunteer who were nearby were able to radio for help. Five hours later, a Coast Guard helicopter arrived to airlift Fintel.

As a Navy vet, Fintel joked by saying, "Oh crap, I'm being saved by Coasties."

Colton Tourtway, a U.S. Coast Guard rescue swimmer, said she was in good spirits when they arrived at the scene.

Fintel suffered a broken hip, a concussion, and deep lacerations. She was transported to Oregon Health and Science University Hospital where she is expected to remain hospitalized for a few days before beginning rehab.

She realizes that she was unprepared for the trip, not having the proper equipment like an ice pick. She hopes to be back on the trail in six to eight weeks if she recovers fully in time.
Report a correction or typo
Related topics:
coast guardrescuenavyveteransmountainsaccident
Copyright © 2022 KGO-TV. All Rights Reserved.
TOP STORIES
New California laws taking effect on July 1
LIST: Bay Area 4th of July events
Experts explain how to navigate difficult conversations this holiday
Omicron subvariants BA.4, BA.5 'are taking off like wildfire'
Crews contain 3-alarm fire burning in Vallejo
Cruise ship hits iceberg in Alaska, returns to Seattle for repairs
FCC asks Apple, Google to block TikTok from app stores
Show More
Oakland A's one step closer to new stadium at Howard Terminal
Woman, 86, recognized as longest-serving flight attendant
4 suspects tied to several SJ home invasion robberies arrested
California late start law aims to make school less of a yawn
Would you come out as gay if you might lose your job?
More TOP STORIES News