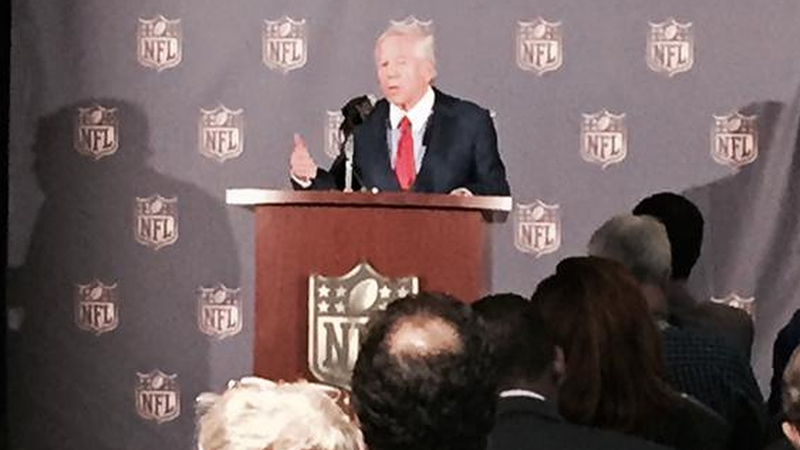 SAN FRANCISCO (KGO) -- New England Patriots owner Robert Kraft will not appeal the $1 million fine and loss of two draft choices the NFL penalized the team for its role in the use of deflated footballs in the AFC championship game.

Kraft made the announcement on Tuesday at the owners meetings that he was putting the league before his franchise because "at no time should the agenda of one team" override "the good of the 32."

The Patriots will lose a first-round draft pick next year and a fourth-rounder in 2017. Star quarterback Tom Brady has been suspended for the first four games of the 2015 season by the NFL, and Kraft's decision not to appeal his team's punishment does not affect Brady's appeal, which already has been filed by the players' union.

Kraft called the sanctions unreasonable and unprecedented, but he also said the process has been going on for too long and that he reluctantly accepts the punishment.

"I know that a lot of Patriot fans are going to be disappointed in that decision, but I hope they trust my judgment and know that I really feel at this point in time, taking this off the agenda, this is the best thing for the New England Patriots, our fans and the NFL," said Kraft, who spoke at the NFL team owners' meeting at the Ritz Carlton in San Francisco.

Policy was hired by the Oakland Raiders and San Diego Chargers to help them make a stadium deal happen. The teams are in talks to share a $1.7 billion arena in Carson.