The friends and family of three teenagers killed in San Jose, Calif. on Tuesday, October 13, 2015 gather to mourn. (KGO-TV)

SAN JOSE, Calif. (KGO) -- The father of one of the three teenagers who died in a street racing crash last week in San Jose says he hopes more people come forward with information on what led to his son's death.

"I said can he rest in peace. I give it up to God, since I know I don't have him," Joe Sanchez Ramos said.

Saturday night, Ramos joined a crowd of people near the site of Tuesday's crash to mourn the loss of the teenagers, including his son, 15-year-old Anthony Ramos.

The three died when police say the stolen Honda they were in spun out of control and slammed into a tree.

Police believe they were street racing.

Police are still looking for the driver of a second car involved.

A witness took this photo noting we after crash you can see stolen Honda crumpled up by tree pic.twitter.com/v6VMjbLpsx 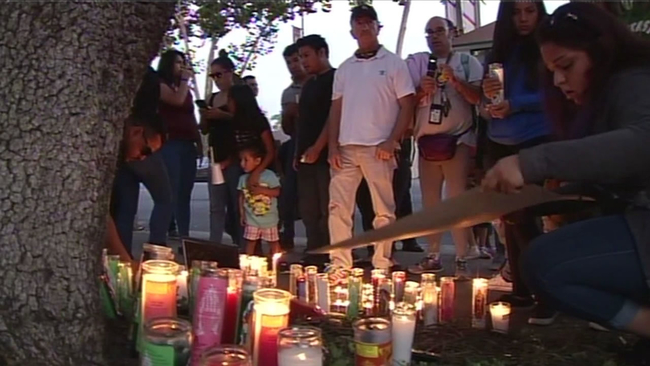