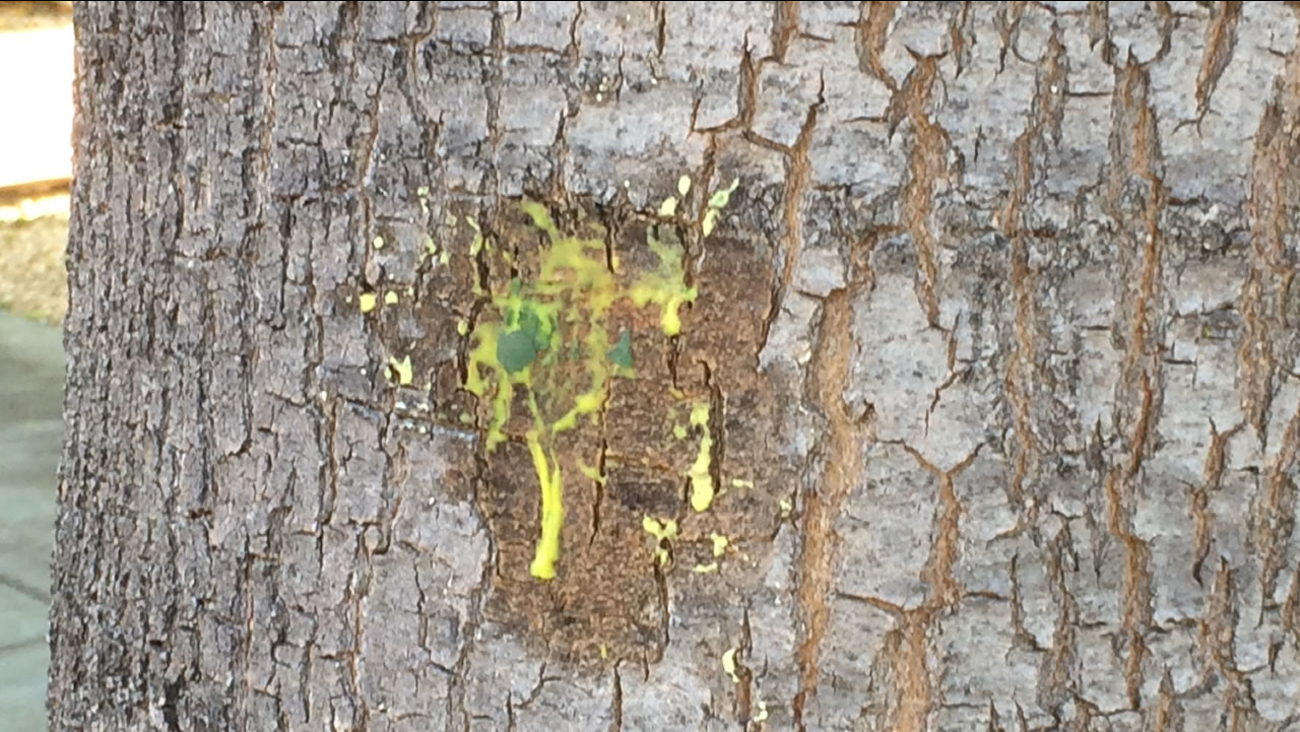 Unknowns suspects shot paintballs at a tree and a person walking a dog on the 700 block of Melville Avenue in Palo Alto, May 6. 2015 (Palo Alto Police)

Police said they received reports of incidents where a moving vehicle attempted to strike five pedestrians along Palo Alto streets, successfully hitting three of them and causing minor injuries.

According to police, the first call came in at about 8:31 p.m. when a man reported he had been shot with a paintball from a moving vehicle at the corner of Newell Road and Diana Avenue.

The man, who is in his seventies, was walking with his wife at the time when he said a light-colored vehicle approached the couple from behind and unknown suspects inside fired 12 to 14 green paintballs at the couple, police said.

The man was struck once in his hip, causing pain. The man's wife was not struck, police said.

At about 8:34 p.m., police said they received another call from two different people who said they had been hit with paintballs shot from a moving vehicle in the 700 block of Melville Avenue.

Police said the first victim in the area, a woman in her forties, was walking her dog and crossing the street towards Parkinson Avenue when she was hit by several green paintballs shot from inside a vehicle that was coming from behind her. The woman was struck on her hand, arm and chest.

Police said the second victim was another woman in her forties who was walking with her husband, also on the 700 block of Melville Avenue, when she was struck by a green paintball on her hand. Her husband was not shot.

According to police, the victims on Melville Avenue described the suspects' car as a gold-colored sedan with a rounded body type that looked to be about 15 years old.

The suspect was likely a passenger on the right side of the vehicle, police said. The victims recalled hearing a male voice yelling in a cheerful manner from the vehicle as it passed.

According to police, people who play paintball games normally wear masks as a safety precaution to avoid injury. Injuries can range from small bruises to severe welts and broken skin. If a paintball comes into contact with a person's face or eyes, it could cause significant injuries.

According to police, charges for suspects in paintball assault cases can range from misdemeanor vandalism, for striking property, and misdemeanor battery, for hitting a person without serious injury, to felony assault with a deadly weapon, for cases when a person is struck and seriously injured.