1 / 12
"Cabaret"
SHN
SHN raises the curtain on the dazzling theatrical experiences that lie ahead!

When asked to describe how SHN puts together a theatrical season, CEO Greg Holland gives a revealing example. 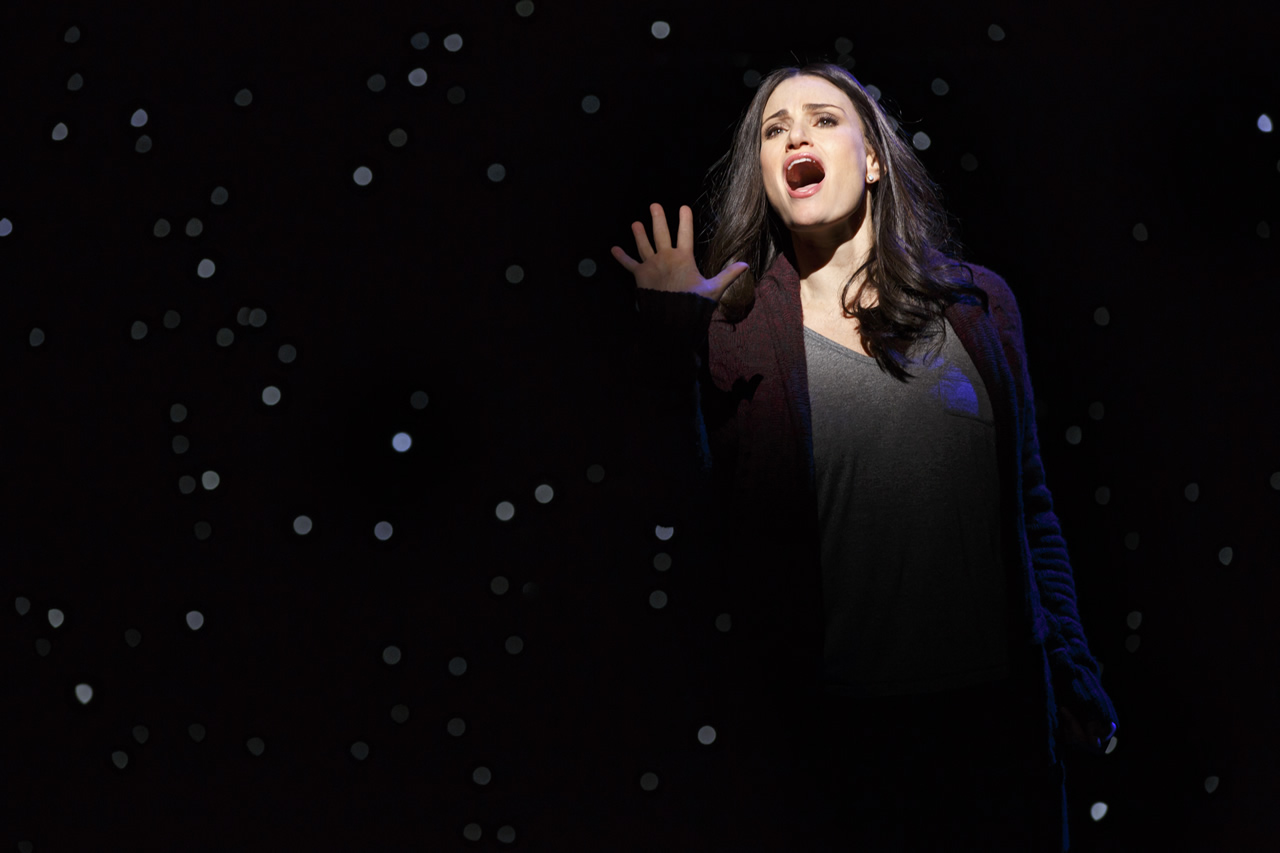 In 2003, Holland says, when SHN was hosting rehearsals for the world premiere of Wicked, he had a "magical, transporting experience." He watched a rehearsal, transfixed, as Grammy - and Tony Award - winner Idina Menzel sang Wicked's showstopping hit, "Defying Gravity."

"I completely believed that Elphaba was flying through the air," Holland says. "And that's the story of what we do at SHN. We work to create the most artistic, entertaining and transformative experiences possible for our audiences." 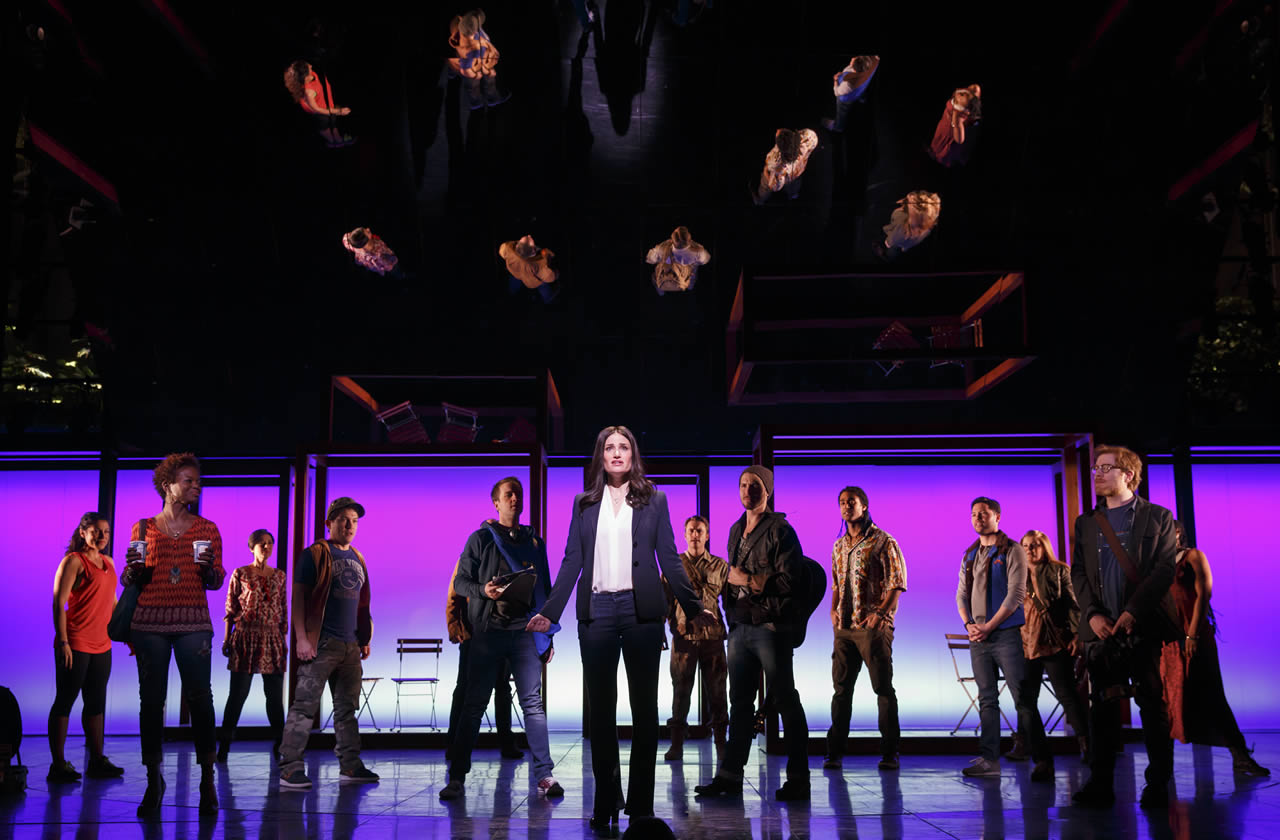 Now, with the announcement of SHN's 2015-2016 season (in which Menzel returns to San Francisco in If/Then), Holland has offered to draw back the curtain and explain how an SHN season comes about.

"It's my job is to know what's happening in the theater world," says Holland, who in an average year sees some 40 productions and countless readings in cities around the world to select the five to seven shows that make up an SHN season. (And that's just the regular season package; SHN offers approximately 15 theatrical productions a year as well as other special events.) Last year, for example, he traveled to Sydney, Australia, to see the premiere of Baz Luhrmann's Strictly Ballroom: The Musical. While there, he visited the Sydney Theatre Company to discuss SHN's ongoing commitment to bring internationally recognized productions to San Francisco. Weeks later, he went to London to see Dirty Dancing: The Classic Story On Stage and Matilda: The Musical, both of which were promptly added to the SHN lineup. 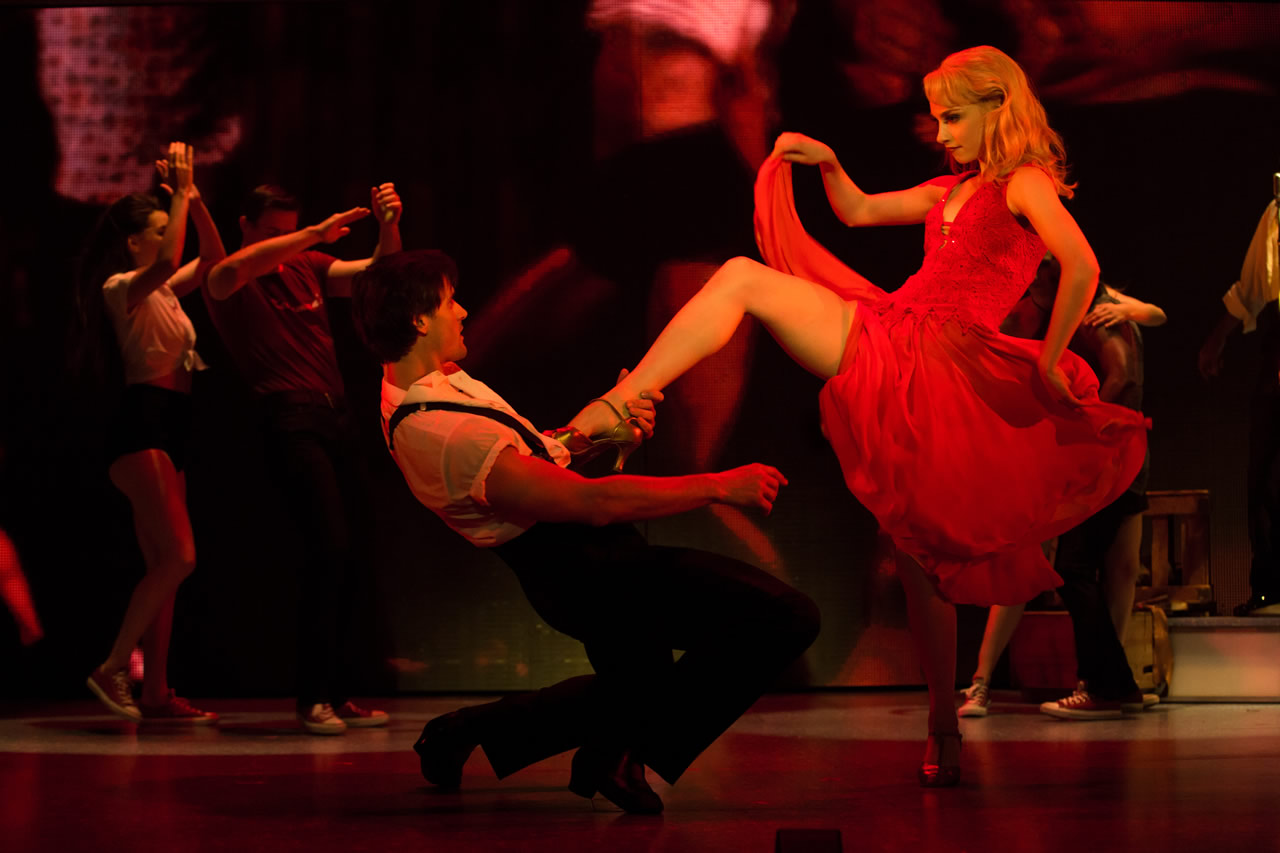 Holland is quick to add that the process is a team effort, involving not only the contributions of the entire SHN staff but also the input of leading members of the international theater community, many of whom he has worked with throughout his career as a Broadway presenter.
"We want our audiences to have experiences that match those they'd have in New York or London theaters," Holland explains. "So we deliver top-quality theater that is a mix of award-winning hits, world or national premieres, and a bit of the unexpected. Our guiding principle is to find works with artistic integrity that engage us and will engage our audiences." 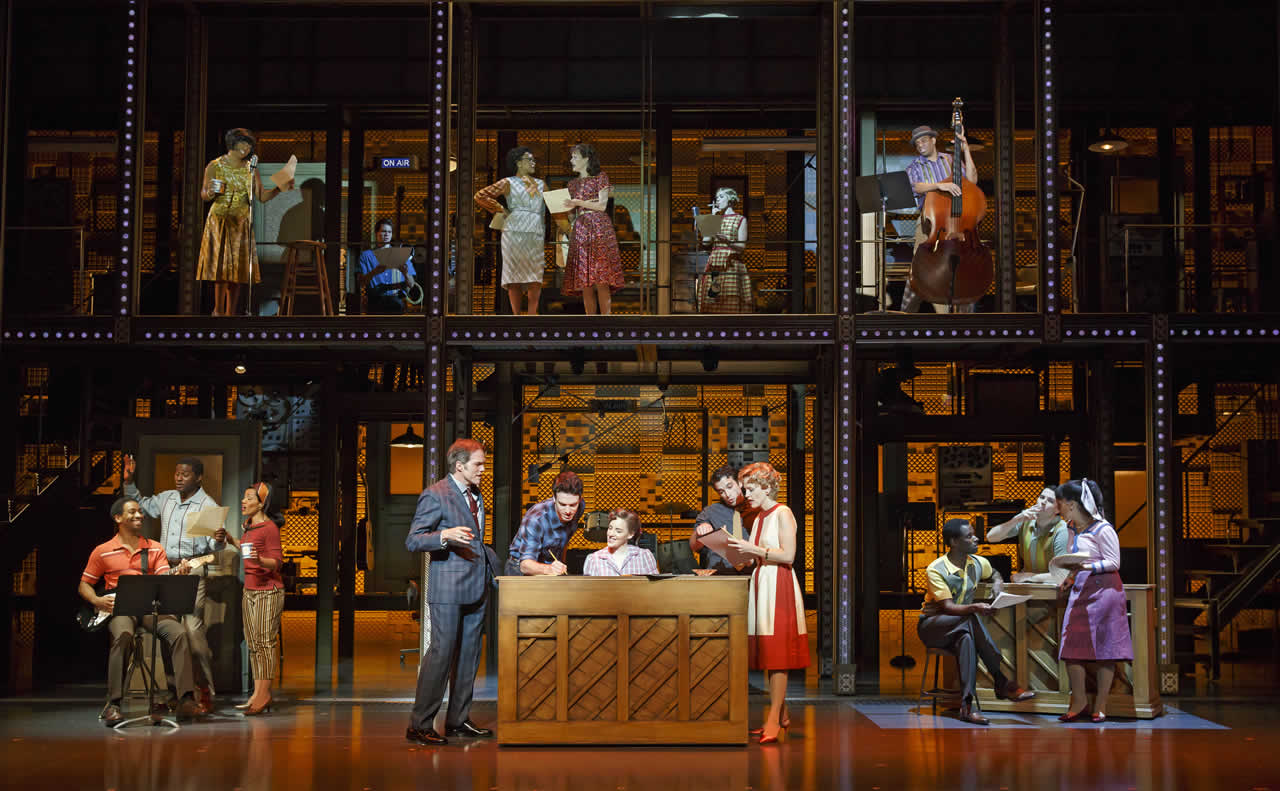 To be tasked with building a theatrical season is "an energizing and exciting job," Holland says, but it's seldom a predictable one. Shows drop out, casts change suddenly and tours have conflicts. Flexibility is essential, as is an in-depth knowledge of touring productions and their schedules. "It's a bit of a puzzle, making it fit together," he says.

To keep things running smoothly, the SHN team typically works on several seasons at once, often scheduling shows three years in advance and locking in each season six to eight months before it begins. But the long hours and demanding travel schedules pay off, because SHN not only consistently presents world-class theater, it also has a long track record of debuting new productions. In the past 15 years, SHN has hosted 13 world premieres and pre-Broadway engagements.

SHN boasts a robust membership of more than 20,000 dedicated theatergoers, who value being able to see the best of Broadway (and beyond) in SHN's beautifully restored theaters. "San Francisco has always been a place where new things are happening, and our audiences have high expectations," Holland says. "And the fact that the Bay Area is a cool, creative place is one reason top talents-from stars like Hugh Jackman, Angela Lansbury and Idina Menzel to directors like Diane Paulus, Baz Luhrmann and others-enjoy working here with us." 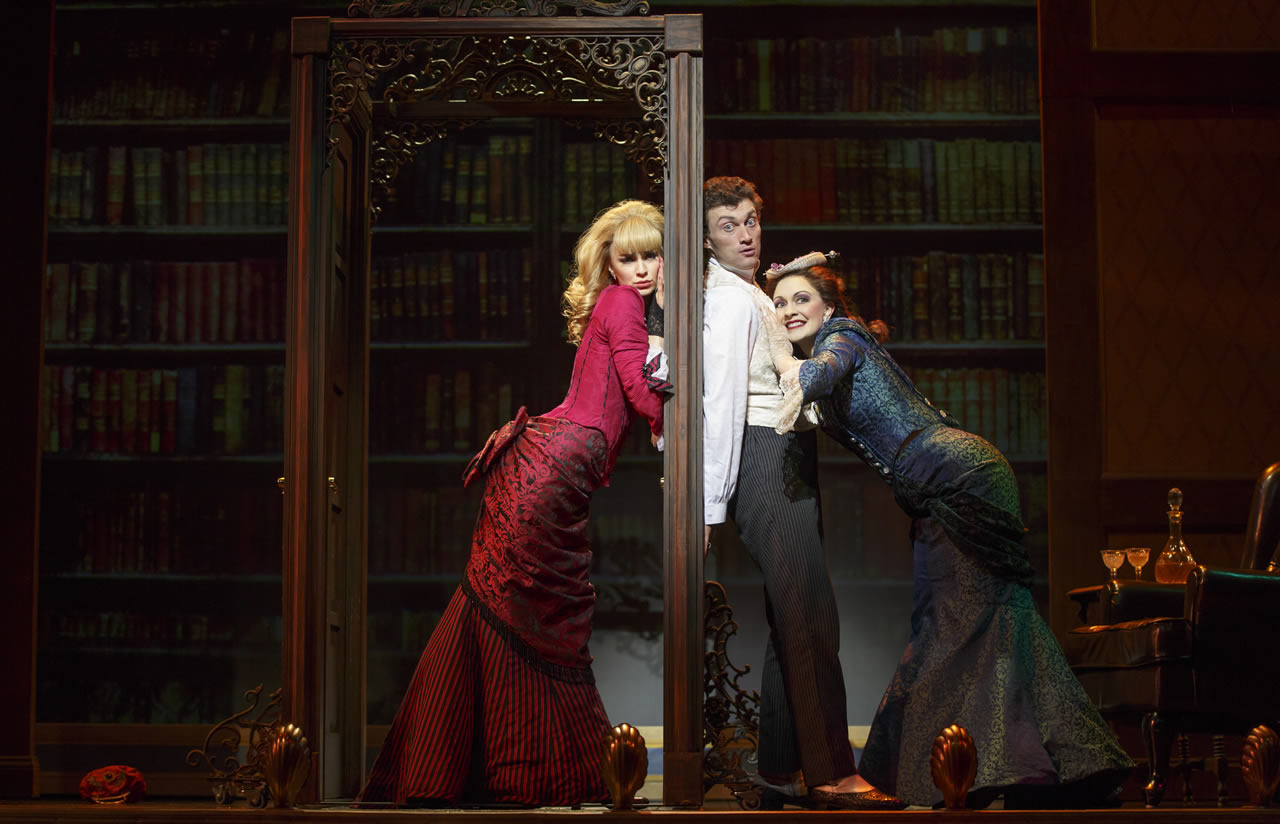 "San Francisco is one of the great cities, especially for culture seekers," says producer Joey Parnes, whose Tony-winning musical, A Gentleman's Guide to Love and Murder, is part of SHN's new season. "I have no doubt that San Francisco audiences will love A Gentleman's Guide. The show is smart, wildly funny, lovely to look at-not unlike the city itself!"

Producer Paul Blake is another such talent who revisits San Francisco time and again to collaborate with SHN; he returns in 2016 with Beautiful: The Carole King Musical. "Of course, San Francisco is an extraordinary town for theater," Blake says. "But the other reason I go is SHN. They are supportive and knowledgeable and know their market. They get it. It's beyond being partners; it's like we're family."

If/Then
The first show of the season is the Tony-nominated If/Then, starring Idina Menzel. Created by the award-winning team behind Next to Normal, Tom Kitt and Brian Yorkey, it is directed by Michael Greif, who also directed Menzel in Rent.

Based on the premise that a single decision can change the direction of one's life, the musical follows 40-year-old Elizabeth as she finds herself at a crossroads, where the path she takes meets the one she didn't. San Francisco will be one of only a few cities on If/Then's tour to feature Menzel, who originated the role of Elizabeth.

SHN is proud to once again work with producer David Stone and star Menzel, who had the same respective roles in Wicked. For Holland, If/Then was the perfect new musical to be featured in the season lineup. "I was struck by how smart and moving the show is," Holland says. "All the elements work together beautifully. And we get to work with old friends again. What could be better?"

A Gentleman's Guide to Love and Murder
This critically acclaimed musical farce opened on Broadway in 2013 and instantly became a smash hit, winning the Tony for Best Musical in 2014. Set in the early 1900s, Gentleman's Guide tells the story of an English heir to a family fortune who devises a devious plan to keep the inheritance all to himself.

"While A Gentleman's Guide to Love And Murder embraces the traditions of the old-fashioned Broadway musical, it has the spirit, energy and sly wit of the modern musical comedy," explains producer Joey Parnes. "It's also gorgeous, melding Edwardian period costumes and sets with contemporary style and technology-all done with a charming wink."

"This was the sleeper musical that exploded into a giant hit," says Holland. "The show's creative team came up with an incredible, thoughtful and deeply clever piece. Gentleman's Guide is set in an earlier time, but it is absolutely a 21st century musical in the way it moves."

Dirty Dancing: The Classic Story On Stage
Based on the popular 1987 film, this theatrical adaptation has played in cities around the world, breaking box office records with its classic pop songs and phenomenal dancing.


Set in 1963, Dirty Dancing is the story of two young people from different sides of the tracks who experience a life-changing summer together. The rousing songs in the stage version are the same as those in the film-"Hungry Eyes," "Do You Love Me," and "I've Had the Time of My Life"-giving audiences old favorites to enjoy and fond memories to relive.

"SHN is always happy to give our audiences productions like Mamma Mia! and Jersey Boys that are an out-and-out great time," says Holland. "This season, we've found it with Dirty Dancing."

Cabaret
Director Sam Mendes' edgy remake of the iconic musical Cabaret, co-directed and choreographed by Rob Marshall, has garnered global acclaim in its incarnations in both London and New York.


The well-known story takes place in 1931 Berlin, at the louche Kit Kat Klub, where the underside of nightlife mirrors the dark stirrings of the Nazi party. With music by John Kander and lyrics by Fred Ebb, the Cabaret songbook has become one of theater's most enduring oeuvres.

For SHN, the question was: Why revisit this classic now? Holland says that SHN had long hoped to present work by director Mendes again-he directed the acclaimed production of Richard III that played at the SHN Curran Theatre in 2011-and Cabaret was the perfect opportunity to do so.

Beautiful: The Carole King Musical
Beautiful: The Carole King Musical had its world premiere at SHN's Curran Theatre in October 2013, before moving to Broadway, where it went on to receive two Tony Awards and a Grammy for Best Musical Theater Album. The story of singer-songwriter Carole King, Beautiful traces her early life, partnerships and career, and features her well-loved hits: "Will You Love Me Tomorrow," "It's Too Late," "I Feel the Earth Move" and many more.

Now, the musical returns to San Francisco as a fully realized production, having gone through significant modifications since its premiere. Producer Paul Blake recalls how the initial San Francisco audiences-"sophisticated and knowledgeable and generous," he says-helped him see how Beautiful could be taken to the next level.


"It has been thrilling to see the path the show has taken creatively," says Holland. "We are happy that SHN audiences have joined us in this incredible creative process, beginning with the birth of the show in San Francisco to the finished piece that will play at the Orpheum this season."