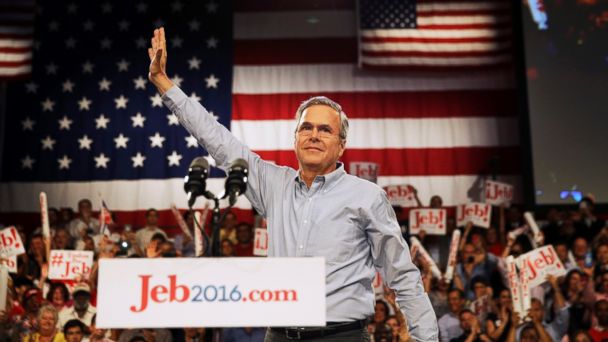 "We are 17 months from the time for choosing," Bush told a cheering audience in Miami. "The stakes for America's future are about as great as they come. Our prosperity and our security are in the balance. So is opportunity, in this nation where every life matters and everyone has the right to rise."

In attendance were members of his family, including wife, Columba, his mother, former first lady Barbara Bush, his children and their spouses, and all of his grandchildren. His brothers, Neil and Marvin Bush and their wives also were in attendance. The two former presidents in the Bush family -- George W. Bush and George H.W. Bush -- were not on hand for the event though Bush tweeted a photo of himself calling his father before his speech:

"I will campaign as I would serve, going everywhere, speaking to everyone, keeping my word, facing the issues without flinching, and staying true to what I believe," Bush said. "I will take nothing and no one for granted. I will run with heart. I will run to win."

Bush's entrance marks the official battle of two political dynasties; the Clintons vs. the Bushes, the two candidates with the most name recognition and likely the most money.

In his speech, he accused the Democrats planning a "no-suspense primary, for a no-change election." He also called out Hillary Clinton by name on the issue of religious liberty.

"Secretary Clinton insists that when the progressive agenda encounters religious beliefs to the contrary those beliefs, quote, 'have to be changed,'" Bush said. "That's what she said, and I guess we should at least thank her for the warning."

While campaigning in New Hampshire today, Clinton declined to answer a question posed by a reporter about whether she had any advice for Bush, who has said his last name doesn't matter as he runs for president. Clinton laughed, but didn't bite.

"I would say this, I'm going to let Republicans decide who their nominee ends up being," she said.

In his speech, Bush also took a swipe at the senators running for president, including Bush's own protge, Florida Sen. Marco Rubio.

"If I am elected president, I'll show Congress how that's done," Bush said referring to his own record of cutting spending in Florida. The crowd responded with chants of "Let's Go Jeb."

In his speech, Bush focused on a few major areas: His record as governor, his focus on vulnerable populations, his plan to spur the economy through the creation of 19 million jobs, and his desire to "disrupt Washington," a direct jab at the senators running for president, such as Texas Sen. Ted Cruz, and Bush's own protg, Florida Sen. Marco Rubio. He'll also focus on foreign policy and his plan to re-engage with the world, having just finished a five-day trip to Europe in which he visited Germany, Poland and Estonia.

But there was an unplanned moment when a group from the pro-immigration reform organization, The Dreamers, heckled Bush. Their shouts were soon drowned out by chants of "Jeb!" by the crowd and they were escorted out. In their hands, were signs advocating children of illegal immigrants to be able to stay in this country.

The announcement took place at Miami-Dade College in Bush' home state of Florida, where he was a two-term governor. This state-sponsored community college is the largest campus in the nation, a perfect backdrop for Bush to tout one of his core issues -- education reform.

The Bush campaign team has actively used multimedia to highlight its messages. Today, the campaign partnered with Snapchat, to reach its 100 million daily active users. Snapchat promoted videos from the campaign that showed everything from excepts of the speech to the stage being set up. It is the first time Snapchat has partnered with a campaign in this way.

Yesterday, the team released the video that played behind him right before his announcement. In it, against a backdrop of diverse faces, Bush narrates and highlights his record as governor and the successes of his tenure; his school voucher program, the creation of new jobs, his policies focused on helping families with disabled children, and his fight against domestic violence, a passion he shares with his wife, Columba.

And this morning, Bush released a video titled, "The Greatest Century," detailing what are likely to be his main campaign points. It ends on his newly unveiled campaign logo, "Jeb 2016", which conspicuously lacks any mention of his famous last name, features a similar look to his gubernatorial logos.

Bush's announcement comes almost 6 months to the day after saying that he would "actively explore the possibility of running for the President of the United States" in December. His campaign has been the subject of great scrutiny since then, with critics accusing him of running a shadow campaign and merely delaying his formal entry into the race to be able to coordinate and raise funds for his Right to Rise Super PAC. Early this year, they set an aggressive fundraising goal of $100 million. His campaign came under investigation by two campaign finance watchdogs who urged the Department of Justice to investigate for violation of campaign finance laws.

A spokesperson for Bush said in a statement to ABC News, "We are fully complying with the law in all activities Governor Bush is engaging in on the political front, and will continue to do so."

Cuban-American singer Willy Chirino and his wife, Lissette, sang the National Anthem at today's event. Preceding the former Governor, was a diverse group of speakers including Pastor R.B. Holmes, Berthy De La Rosa-Aponte, an advocate for families with disabilities who's been featured in campaign videos, and his son, George P. Bush, who was elected to Texas Land Commissioner last year.

Bush exited the state to "Homegrown" by the Zac Brown band and later served meatballs at a food truck outside the event.