KGO
VALLEJO, Calif. (KGO) -- A 65-year-old is free Saturday morning pending an investigation into a fatal collision in Vallejo.

Police are looking into whether the man was under the influence or suffering a medical condition when he drove his car through a bus stop and down a sidewalk, killing a woman and injuring five others.

Pedestrian Willie Dixon says the speeding car jumped into the curb, drove down the sidewalk and ran over his feet while he was waiting for the bus.

#Vallejo: Driver ran over this man's feet while he was waiting for bus. Car also struck 5 more killing one. #mapit pic.twitter.com/RlUuyHeHTm

"I was sitting here minding my own business. I'm very lucky to be alive at this time," Dixon said.
Police say the car drove in between two poles, then struck a group of five people from behind - three women and two children, including a 4-year-old girl and 5-year-old boy.

"I heard all this screaming and the car came right at them. There was no way they could get out of the way. It was terrible," witness Eileen Buonlamenti said.

Police say the driver dragged two of the women under his car, leaving behind a trail of their belongings.

A passing tow truck stopped and the driver lifted the car off of the women. One of them died.

Police say the deceased woman was the mother of the 4-year-old girl.

Police are investigating witness accounts that the 65-year-old driver was slumped over the wheel at a traffic light, then took off abruptly when other cars began honking.

"Officers are trying to determine if he was under the influence of some substance or if this was a medical condition," Vallejo PD's Michael Nichelini said.

Police say he showed no obvious signs of intoxication.

#Vallejo PD says mother of 4 y/o girl died after driver struck six ppl on sidewalk and dragged two of them under car. pic.twitter.com/lKHwc1h0N7 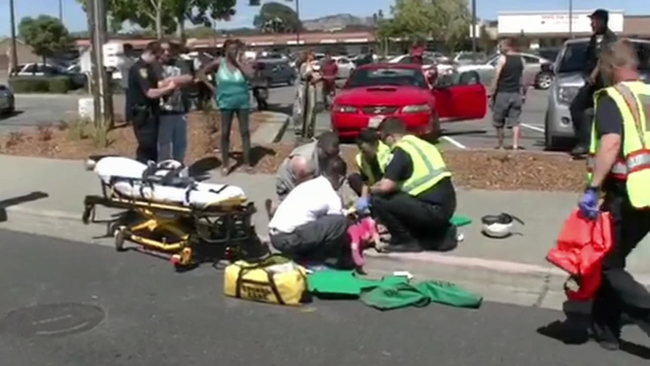 Multiple injured, 1 dead after being struck by by car in Vallejo
More Videos
From CNN Newsource affiliates
TOP STORIES