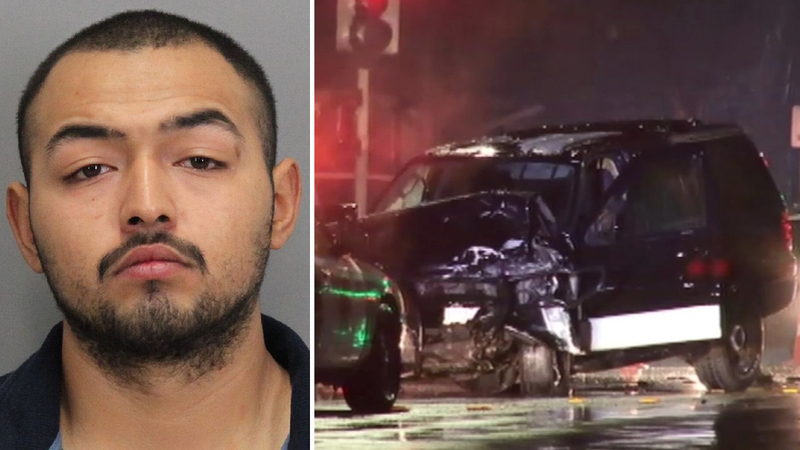 #MORE: 19yo Carlos Villalobos of #SJ has been booked into the Santa Clara Co. Jail for felony drunk driving, hit and run, and two warrants.

ABC7 News has learned that prior to Monday night's crash, the suspect had two other warrants out for his arrest. We were inside the courtroom Tuesday afternoon as the suspect faced a judge regarding those charges.

San Jose police say Villalobos was behind the wheel of a black Ford Expedition around 10:30 p.m. and was responsible for a drunk driving rampage that went for a mile and a half.

Police tell ABC7 News the destruction began in the parking lot of a Denny's restaurant near Tuers Road and Capitol Expressway. They say the suspect hit one vehicle on his way out and another as he approached the Expressway.

According to police, Villalobos then drove south on Senter Road and hit two parked cars before making a U-turn on El Cajon Drive.

Senter Road in #SanJose is open to traffic after police investigation of fatal DUI crash wraps up. 1 person killed. pic.twitter.com/ha2PK45A7J

Authorities say he then drove toward Singleton Road, ran a red light, and crashed into a yellow Volkswagen Beetle.

But it didn't end there.

"After striking the Volkswagen, our suspect still continued a little bit northbound and struck another vehicle that was southbound on Senter Road, preparing to make a left turn," said Monahan.

Police say a total of six vehicles were struck by the suspect.

The Santa Clara County Coroner's Office has identified the man who died at the scene as 36-year-old Carlos Manrique Torres of San Jose. His next of kin has been notified.

The suspect has been booked into the Santa Clara County Jail for felony drunk driving, hit-and-run, and two previous warrants.