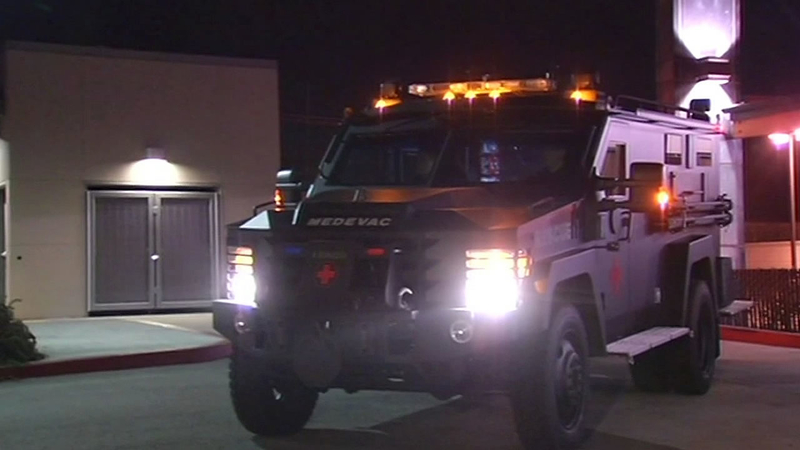 SAN LEANDRO, Calif. (KGO) -- About 100 people attended a meeting Thursday night in San Leandro and people from the community expressed their concerns about a medevac vehicle the San Leandro Police Department says it wants to acquire.

The armored vehicle was the subject of the special San Leandro City Council meeting. Police officers from the region said the vehicle would enable paramedics to help victims trapped in a hot zone, since EMS doesn't go into a hot zone unless it's been cleared. The medevac is able to withstand a rifle round, but is also equipped like an ambulance on the inside.

Police say that in the last two years, they've had to borrow a vehicle like it nine times. Opponents, however, don't think there's a need for it. If approved the medevac would be the only dual purpose medevac and SWAT vehicle in Northern California.

However, many in the community see the vehicle, with gun ports and a turret, as a threat. Some at the meeting said they think the device could escalate situations an could cause people to behave more irrationally.

Cities like San Jose and Berkeley rejected armored police vehicles because of public outcry. It would be shared with Fremont and Alameda Fire. And now, it only needs the approval of San Leandro's City Council scheduled to vote on it sometime in February.

The vehicle is on loan right now from the manufacturer and is on display for the public. Some are highly skeptical about how it would be used by this police force and partners in Alameda County, including the city of Fremont.

"Basically it's an ambulance with armor protection around it," said Lt. Randy Brand. "And it would basically be used to integrate fire and EMS and police personnel into a critical incident instead of bringing a regular ambulance."

But not all residents believe that's all it would be used for. Opponents are calling it a tank and they worry it will lead to a militarization of a police force that to this point has a good relationship with its residents.

"This is part of a larger national discussion and a militarization of our police departments going on across the country that we really need to stop," said San Leandro resident Mia Ousley. "We don't want to become a police state."

The cost of the vehicle is $275,000. San Leandro police hopes to finance about $200,000 with a Homeland Security grant. The rest would be paid for with money from asset forfeiture funds.