But she got there in a controversial way. It involved wearing bullet proof vests in public and living in a safe house where she was under 24-hour protection from armed guards.

RELATED: Oakland cop charged with engaging in the act of prostitution

Attorney Charles Bonner responded, "No," but he said he's concerned about "traffic" he's seeing on the Internet.

Abuslin says her guards claim her life is in danger and they've taken extreme measures to protect her.

Investigative Reporter Dan Noyes met Abuslin in June when he did the first and only in-depth interview with the woman at the center of the Oakland Police scandal.

She has been open about her difficult upbringing that led her to tattoo the words, "Self Made" on her hands. She talked about her encounters with police officers.

When we asked her: "Why did you have sex with the other ones who didn't pay you?"

Abuslin said: "I don't know, I just look at them like information. Their perks become your perks, you know."

Abuslin has also been open with the ABC7 I-Team about her daily drug use and even texted pictures of it to ABC7 News' Dan Noyes.

Two months ago, she voluntarily checked herself into a Florida rehabilitation facility.

But Abuslin's attorney says she was not allowed to call her mother or father and when she tried to leave after just three days-staffers tried to inject her with a sedative.

Bonner said, "One person grabbed her and she in kind of a bear hug to administer this drug, she doesn't know what it is, and so she bit this guy."

Abuslin was arrested and charged with felony aggravated battery. But Bonner got the charge reduced to a misdemeanor and she was freed from jail.

That same night Bonner brought Abuslin and her father back from Florida.

Noyes asked Bonner: "When you arrive back at SFO what precautions did you take, were there any bulletproof vests, were there guards?"

But when in response to the question, "Has she received any actual threats of violence?"

Bonner replied by saying: "Well, I can't say that there are any threats, but that there is enough traffic out there for us to be concerned."

When pressed to define what he meant by "traffic", Bonner pointed to social media and online comments and said, "Meaning that that was noise on the net, noise out there."

Earlier this month Abuslin sent Noyes a message saying: "They're scaring me that I'm a get killed."

Meanwhile her attorney set up a "Security Protocol".

It included keeping Abuslin in safe houses, armed security guards round the clock and wearing a bullet proof vest whenever she went outside.

She was also limited on phone calls and visits-even from her family.

Gil Soffer is a former federal prosecutor and ABC7's legal analyst. We asked him about such tight security.

"I've never encountered a case where I've seen that happen," he said.

Bonner says the extreme measures have worked. He says Abuslin has kicked her drug habit and she's preparing to go back to school.

Noyes asked Bonner: "I can just imagine a 19-year-old cooped up in the house for weeks on end. Did Abuslin get antsy, did she try to run away?"

But Abuslin told Noyes earlier this month she, "tried running away" from the safe house, "hiding in the bushes, but they got me."

She also told ABC7 News her family "tried taking me home" after they had lunch in Novato.

She said, "My sister was trying sneak me off (to) the getaway car. But I didn't do it and they got a lil upset."

Dr. Becca Barnett is a psychotherapist with decades of experience treating victims of sexual trauma.

"It's like putting a victim into solitary confinement," Barnett said.

"She needs to be with her family even if they haven't been the best parents. At least, those are people she has connections with," Barnett explained.

Abuslin has been pushing back and 10 days ago after an interview with the Contra Costa District Attorney's Office, she insisted on leaving the lawyers and security guards behind and she went to Reno with her family.

She sent a picture and said: "No clubbing lol. And when I was in the casino, I said no to the complimentary drinks. And I'm staying away from the boys."

Abuslin's father told Noyes the lawyers were trying to run up the bills with the security but all of that is changing. 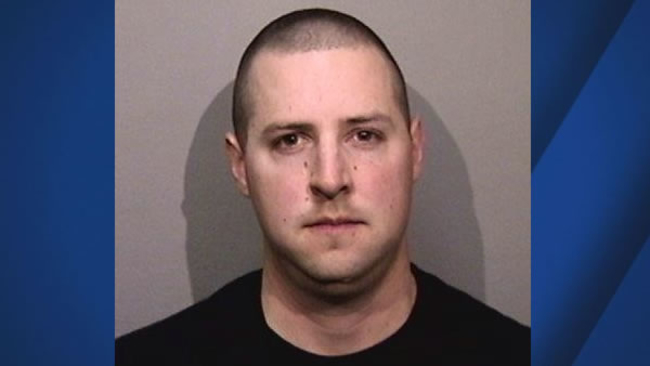 Oakland cop charged with engaging in the act of prostitution
ITEAM