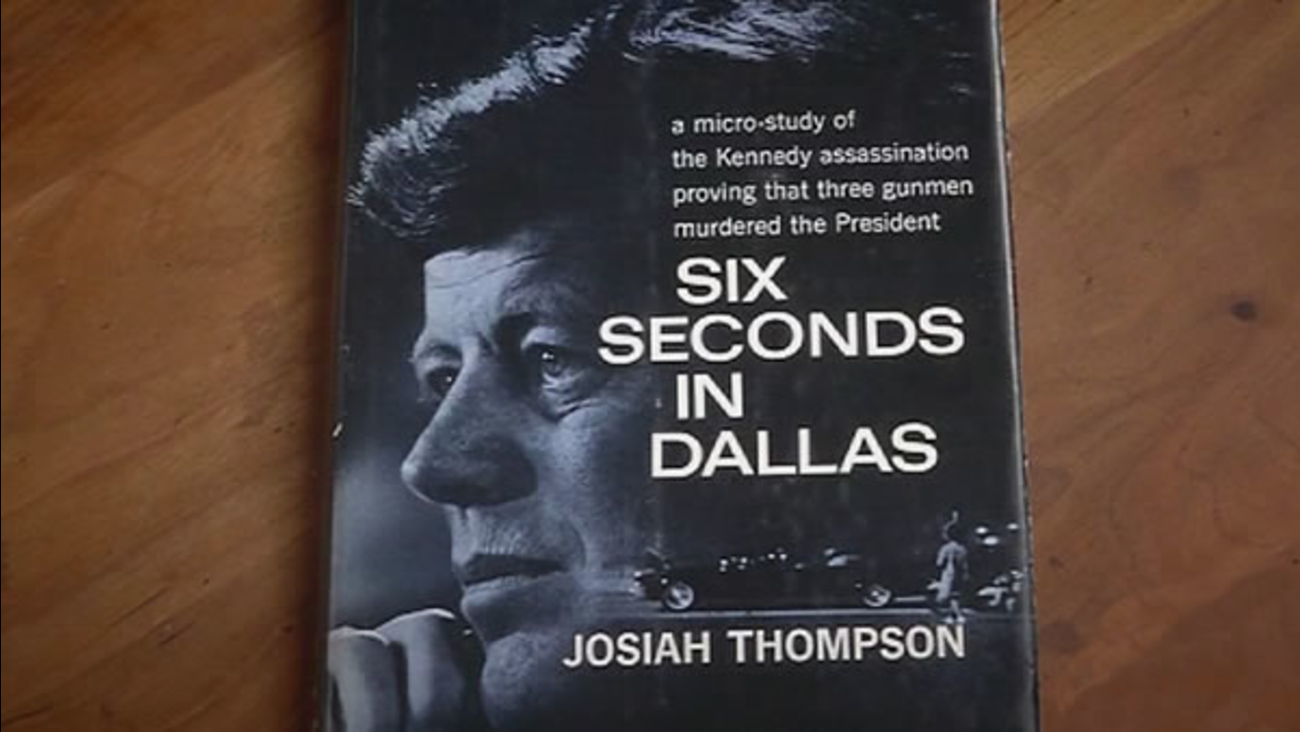 KGO
BOLINAS, Calif. (KGO) -- Tomorrow marks 50 years since the assassination of President John F. Kennedy. To this day, there is disagreement about what happened -- did Lee Harvey Oswald act alone, was there a conspiracy, what was the motive behind the murder? A Bay Area author with deep experience in this case has a new book and Dan Noyes has an exclusive I-Team interview.

About 400 people were there in Dealy Plaza that day watching the president's motorcade, dozens of them taking pictures and we still don't really know what happened. However, Bolinas author Josiah Thompson says he has answered one very important question.

Thompson's new book, "Last Second in Dallas", comes to a startling conclusion about Lee Harvey Oswald, who was arrested for shooting the president from the 6th floor of the Texas School Book Depository in Dallas. Thompson read to us, "Whatever Lee Harvey Oswald did or did not do on that Friday 50 years ago. He did not kill John Kennedy."

Before you dismiss Thompson as another conspiracy theorist, consider his background. He served on Underwater Demolition Team 21 -- the precursor to the Navy SEALs -- graduated from Yale with a Ph.D. in philosophy, taught college courses and had a long career as a private investigator. His most famous case was investigating Oklahoma City Bomber Timothy McVeigh.

What is most important to this story is how Life Magazine hired him in 1966 to examine JFK assassination evidence for a cover story. Thompson himself interviewed many of the key witnesses, and in 1967, he wrote what's considered to be one of the seminal books on the assassination, "Six Seconds in Dallas". He told the I-Team, "Because I worked for Life Magazine, I had access to their wonderful copies of the Zapruder film."

Amateur cameraman Abraham Zapruder was standing on a concrete pedestal near the presidential motorcade. Thompson now says he got one important fact about the film wrong -- he thought between frames 312 and 313, the president's head moved forward 2.16 inches.

"What that meant was, to me at the time, was that what we saw here was clearly the exit of that bullet," Thompson said. "I mean, head moves forward and you see an explosion. Well, that's the bullet coming out."

That supported the Warren Commission's finding that Oswald acted alone, that all the shots came from behind the limo -- from the 6th floor of the Book Depository. Now, Thompson realizes that the image smears from frame 312 to 313, it's not the president's head that moves forward, it's Zapruder jerking his camera at the sound of gunfire.

In fact, pieces of the president's skull were recovered from the street and the grass on the far side of the limo. Thompson is now convinced, the fatal shot came from a second gunman: "It was fired from the right front from 12 feet west of the corner of the stockade fence, a very, very exact location."

That location was at the top of the grassy knoll. Thompson makes another compelling argument for a second gunman, based on what the United States House Select Committee On Assassinations concluded. He said, "They found that the last two shots were seven tenths of a second apart."

For his research in the 1960's, Thompson bought the same type of rifle Oswald used that day, a bolt-action Carcano made in Italy.

There's no way anyone could fire two shots from that rifle within a second. Thompson told the I-Team, two gunmen equals conspiracy: "I mean there's no question any longer. Two guys did not just accidentally decide to shoot the president at the same time and place, right? If you have two different locations as firing points, you have necessarily some sort of conspiracy in the case."

Josiah Thompson spoke on Thursday at the big conference in Dallas, marking the JFK assassination. His first book is out of print and it's fetching up to $300 a copy online. He's talking with publishers now and this new book should be out late next year.
Related topics:
bolinascrimedistractionmurderbooksentertainmenti teamu.s. & worldcold case
Copyright © 2021 KGO-TV. All Rights Reserved.
More Videos
From CNN Newsource affiliates
TOP STORIES