The case is an enduring Bay Area mystery, but on the eve of the 20th anniversary of Kristen's disappearance, there's fresh hope in a seemingly cold case: Private forensic investigators say they've found new evidence and a possible DNA match.

Kristen moved to Oakland the summer of 1997 to take a photography class at UC Berkeley. She'd been awarded a scholarship from North Carolina State University to spend the semester living, studying and working in another city. Kristen chose the Bay Area, where the family had previously vacationed.

Now, the Modafferis, who are from Charlotte, are inextricably tied to the Bay Area by Kristen's disappearance. They sat down to discuss the new leads and reflect on the case that's taken bizarre twists over the years.

"When I think about 20 years having gone by, I feel quite robbed on having missed out on the experience and Kristen not being here, part of our family, for the beautiful milestones in our lives," said Lauren Modafferi, Kristen's sister, as she choked back tears.

Kristen is the second oldest of Bob and Debbie Modafferi's four daughters. Allison is the oldest, Lauren and Meghan are the two youngest.

"We think about her all the time," said Allison Modafferi emphatically.

Kristen had just turned 18 before she moved west. It's a detail that would later complicate the search, because as a legal adult, she wasn't considered a missing and endangered child.

On June 23, 1997, Kristen left the coffee shop where she worked, Spinelli's Coffee in San Francisco's Crocker Galleria. She withdrew money from the bank, a surveillance camera capturing what are the last known images of Kristen.

Coworkers told police they saw her walking with a blonde woman.

"As far as who that could be, we're just not sure," said her father, Bob Modafferi.

Despite efforts to locate the mystery woman, no one has ever come forward.

Though Kristen was last seen in San Francisco, she was renting a room at a home in Oakland, and her missing persons case is with that police department.

"This is specifically her file," says Officer Rodger Haley with the Oakland PD, as he pulls out a 3-foot-wide drawer.

It's packed with folders, notes on the investigation. Haley inherited the Modafferi case, plus hundreds of others, in his large case load. Kristen's case is still classified as an open case.

In 2015, the Modafferis connected with a private forensic investigator and his K9.

Paul Dostie and Buster, who specializes in finding hidden graves, took another look at the Jayne Avenue property in Oakland where Kristen lived. Buster sniffed for human decomposition chemicals and alerted Dostie to a drainage pipe downhill of the home and at the vents around the basement.

Under recommendation from Dostie, the Oakland police brought in specialists from Chico State. They used ground-penetrating radar in the basement.

"Based on that, they found an area of interest and came back and performed a dig," said Haley.

But, he noted, the dig didn't reveal anything. The soil, dense clay, would make it exceedingly difficult to bury someone in the basement, Haley said.

Dostie returned in February of this year and brought with him Dr. Arpad Vass, a research scientist and forensic anthropologist at Oak Ridge National Laboratory. He specializes in human decomposition.

RELATED: Dr. Arpad Vass details his work as a forensic scientist in a TedX talk

Vass has developed a proprietary device that detects human decomposition chemicals. He and Dostie used it to pinpoint an area between the two Oakland houses at the base of some porch steps.

"That, we feel, is the source and, most likely, Kristen's blood there," Dostie said. "It is human blood, but ... we don't get an indication of a burial. It's more of a crime scene."

Bob Modafferi said his family was told there could be a connection.

"The DNA they were finding within these human decomposition chemicals was a match to our daughter Kristen," he said.

The Modafferis provided DNA samples for Vass and Dostie to use in their testing.
But, due to the proprietary nature of the device, details about how it works are highly guarded. It's currently under patent review. Both men are volunteering their time and expertise.

Nonetheless, Dostie said, "We feel pretty confident of our findings."

"This new DNA evidence, to me, it changes everything," said Meghan Modafferi. "It's like starting over. It's like a whole new story."

But the technology is new, which presents a challenge for OPD.

"That's the problem ... being able to understand it and being able to duplicate it in case this does go to a higher level, where we need to have a basis for proof," said Haley.

To treat this as evidence, OPD would have to scientifically and independently verify it. Then it could hold up if presented at a criminal trial.

"If they're able to come up with the same conclusions as Dr. Vass, I see no reason why this shouldn't be opened as a homicide case," said Bob Modafferi.

As Oakland police look into the findings, there's another unresolved thread in Kristen's case: two persons of interest.

ABC7 News tracked the two down and, for the first time, Lampo spoke on camera. 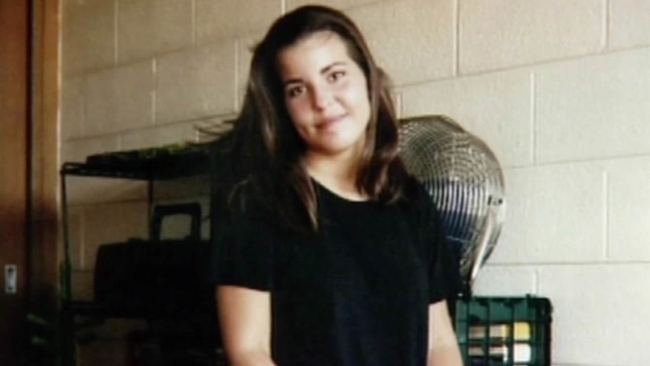