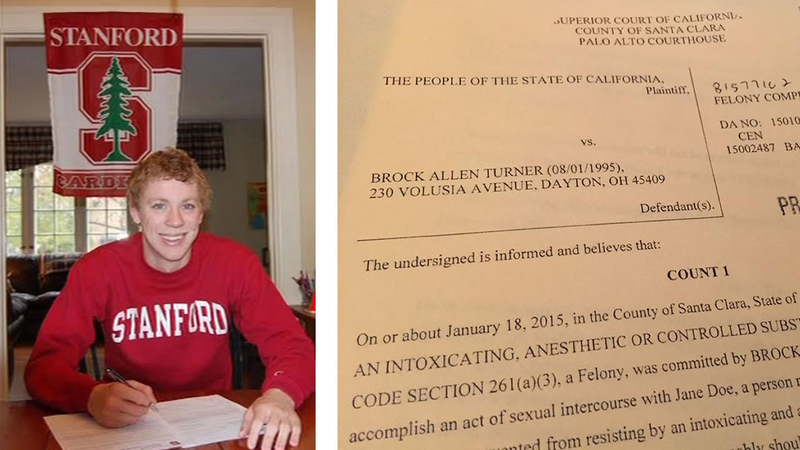 Brock Turner withdrew from school after being accused of a crime against a woman who was drunk and unconscious.

The complaint against Turner is more than 50 pages long and it includes the police report.

In that report, police say the suspect, the woman and witnesses gave their account of what happened that night.

Two graduate students told police they happened upon what they first thought was consensual sex.

"He noticed the female laying on the ground was not moving and something was weird about the situation," the police report said.

"It appeared like the woman was not moving and something seemed odd," according to the police report.

In his statement, Turner says he had been drinking and that he and the woman were hooking up, but they never had sex.

Police quote him as saying, "He was having a good time with victim and stated that she also seemed to enjoy the activity."

The woman told police she was also drinking and has no memory of leaving the party with a man.

"The victim did not consent to any sexual activity or touching. Victim was completely unresponsive and did not wake up until she was at Valley Medical Center," police said in their report.

Stanford students who spoke to ABC7 News had strong opinions about how the university is dealing with the case.

"If this is another case in which the entitlement that comes with being a white, male, Stanford athlete finally hit an obstacle and I hope that that kind of entitlement doesn't create impunity for future offenders," Laura Perez, a Stanford graduate student said.

"I don't think the university does a good job on these types of cases to begin with," Stanford graduate student Sherif Ibrahim said. "This is an anomaly, only because it went public from the very beginning. They had to deal with it because of possible backlash later on."

Brock turner is scheduled to be in court on Monday.