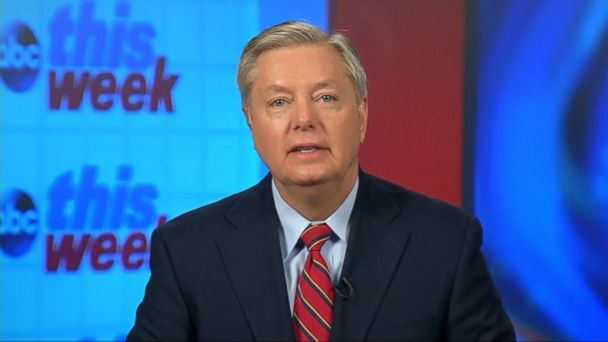 "Well, I love Rudy, but I don't want to go there. The nation's very divided. President Obama has divided us more than he's brought us together and I don't want to add to that division," Graham initially said on ABC's "This Week" today, before adding, "I have no doubt that he loves his country. I have no doubt that he's a patriot. But his primary job as president of the United States is to defend this country and he's failing miserably."

The South Carolina senator said that part of that failure stems from labeling the threat posed by ISIS and other terrorist groups as "violent extremism" instead of "radical" Islamists.

"They've adopted a theory of religion that's 1,000 years old that requires a worldwide caliphate that will purify the Islamic religion, kill or convert every Christian and Jew and vegetarian in their way," Graham said. "They're not going to stop unless somebody stops them."

The Obama administration has faced criticism for its reluctance to label "violent extremism" as "Islamic," maintaining that ISIS and other extremist groups represent a perversion of the religion and to call them Islamic would legitimize a false claim. Graham, however, took an opposite position.

"I've never been more worried about my country than I am today in terms of radical Islam, and yes, it is radical Islam," he said.

But Department of Homeland Security Secretary Jeh Johnson defended the administration's stance in a separate interview on "This Week" today.

"In my view, if we start referring to ISIL [ISIS] as occupying any form of the Islamic theology, we're pretty much dignifying them as occupying some form of that faith," Johnson said. "They don't. Islam is about peace and brotherhood. There are 1.6 billion Muslims in this world and the true Islamic faith has nothing to do with what ISIL represents, and so, to start labeling them as Islam or Islamic State in any respect I think gives them far more dignity than they deserve."

In the fight against ISIS, Graham said that he wants "the Republican party to talk openly about the hard things, like having boots on the ground in Syria and Iraq, American boots on the ground" and emphasized the need for the use of military power.

"There's no doubt in my mind militarily that we cannot succeed in our endeavors to degrade and destroy ISIL without having an American component," Graham said on "This Week."

Graham also weighed in on the battle in Congress over Department of Homeland Security funding, currently tied up over a House GOP effort to block President Obama's executive action on immigration. Graham said he believes the executive orders are unconstitutional, but thinks they should be dealt with in the courts so that Congress can move forward on DHS funding.

"I hope my House colleagues will understand that our best bet is to challenge this in court, that if we don't fund the Department of Homeland Security, we'll get blamed as a party," Graham said.

Graham, who created a presidential exploratory committee last month as he mulls a 2016 bid, and traveled to Iowa this week, said he "doesn't know" if he could win the Republican nomination, but that he's "going to give it a try."

"I'm trying to run a campaign, if I decide to run, that will focus on securing this nation," Graham said. "I think I could create a pathway forward to straighten out the mess we're in and we'll see where that goes."