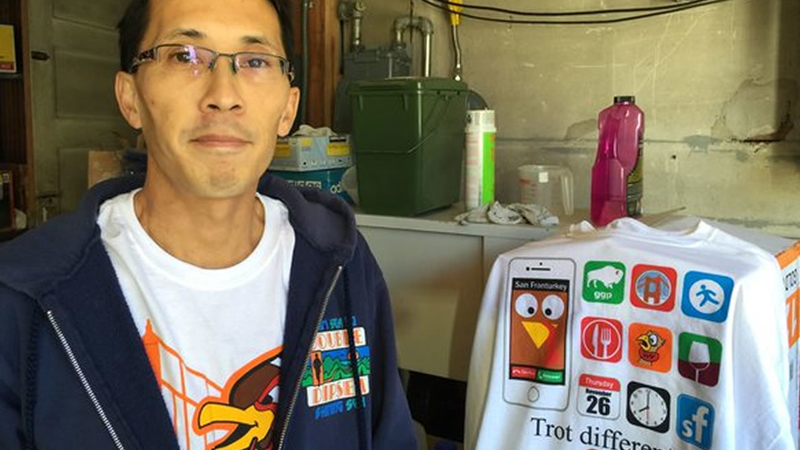 SAN FRANCISCO (KGO) -- Runners in Thursday's San Francisco Turkey Trot won't get souvenir t-shirts this year because they were all stolen. Regardless, at the Polo Fields in Golden Gate Park, the Thanksgiving race will go on as planned in the morning, stating at 9 a.m.

The Turkey Trot is all set to happen, but the signage is missing, along with the t-shirts. They've been stolen, and authorities say they need your help.

"Oh, no. I can't believe it. Who'd do such a thing? It's so terrible," San Francisco resident Linda Ramos said.

The normally quiet Richmond District neighborhood is in shock hearing about a U-Haul truck that was stolen overnight.

It was filled all kinds of equipment and refreshments for Thursday's San Francisco Turkey Trot.

"I walked out of the house around 8 o'clock, and I stood in shock when I didn't see it. It was gone," race director Steve Woo said.

Woo has been running the event for 13 years, benefiting the Track and Field program at Lowell High School. Washington High School is a new beneficiary this year. The stolen truck is a big blow, given what was inside.

There is only one t-shirt left -- one that Woo set aside to give to the designer. Fortunately, the turkey costume wasn't loaded in the truck yet. The mascot competes against kids in a separate 100-meter race.

Despite the setback, the San Francisco Turkey Trot is still on at the Polo Field in Golden Gate Park.

"I've had runners asking if they can do anything, if they can donate any products. One runner asked if she could bring out cookies. Thank you, Martha," Woo said.

Woo hopes someone will spot the U-Haul truck with an Arizona license plate# AD48789.

"Hopefully they will return the truck, maybe contact the police and let them know where the truck is 'cause we'd really like to have it back," Woo said.