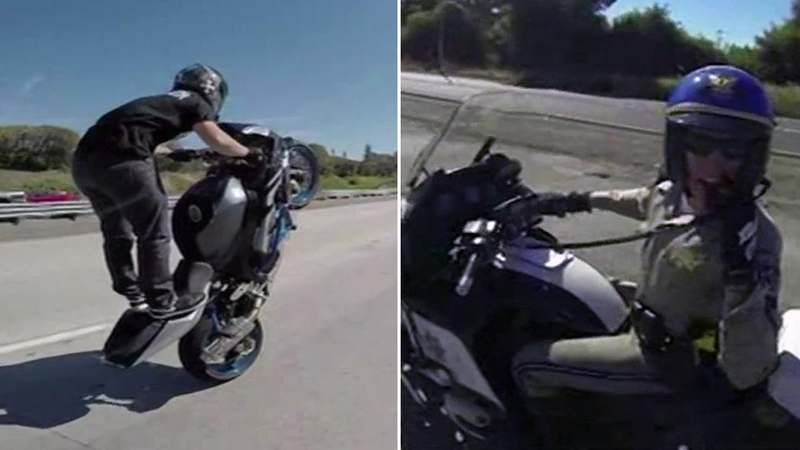 CHP taunted by stunt bikers on I-680 in Milpitas

MILPITAS, Calif. (KGO) -- A video posted to YouTube shows a group of motorcyclists speeding, doing stunts and taunting a CHP officer. It may look like a scene out of a movie, but it played out on I-680 in the South Bay.

The CHP says they've dealt with motorcycle groups like this before on Santa Clara County roads and highways, but this video shows just how overwhelming it can be to try to stop the reckless driving.

The CHP says the two minute video was just a snippet of a 10 to 12 minute ordeal on southbound I-680 in Milpitas and San Jose on the afternoon of Saturday, October 11. The video shows the motorcyclists speeding, doing wheelies and standing on their seats.

The CHP says the unidentified officer tried to pull several of them over when he was approached by one of the motorcyclists who waved his hands in a shooing motion. Some words were exchanged.

"The officer was telling him to slow down to stop driving recklessly. He was making some statements about the safety and the illegal aspect of the way they were driving," said CHP Officer Lee Ross.

After the high speed talk the officer sped off and the group of motorcyclists celebrated. The CHP says the officer pulled on to the shoulder and waited for back up. The group eventually got off at the McKee Road exit in San Jose. No one was arrested or cited. Gurustunts posted the video on YouTube; he emailed ABC7 News and said he was not at this ride and was sent the video from an anonymous motorcyclist. The CHP says they were made aware of the video yesterday and are just starting their investigation.

"I've reviewed the video there's nothing that I saw on the video that is readily identifiable, but I haven't started to look at it from an investigative standpoint," said Ross.