The oil sheen could be seen in the northern part of San Pablo Bay, which caused massive delays to ferry service.

Phillips 66 officials released a statement saying: "At 8:00 a.m., a light oily sheen was discovered at the Phillips 66 Rodeo Refinery Marine Terminal. At the time, a tanker was berthed at the marine terminal. Our internal response team immediately responded to the incident and we notified the National Response Center (NRC) and the United States Coast Guard. Operations at the marine terminal have been temporarily shut down and we are working closely with the U.S. Coast Guard and other agencies regarding the response. The exact volume of material released is still being determined, and the cause of the incident is under investigation. At this time, there have been no injuries associated with the release and there is no anticipated health impact to the community. The safety of the community, the environment and our people are of utmost importance to our company and these priorities will guide our efforts as we work with the agencies on the response."

Officials said the oil sheen may be connected to an odor that hospitalized dozens in Vallejo Tuesday night.

The smell seemed to be most concentrated on the southern side of Vallejo in the Beverly Hills Park and Glen Cove Park neighborhoods.

The odor can no longer be detected in Vallejo. Meanwhile officials are investigating the sheen on the water.

City leaders are getting a lot of calls from residents in Vallejo wondering what the smell was. Officials had to bring in crews to handle at least 800 phone calls that came in from concerned residents. A shelter-in-place order for the smell was lifted early Wednesday morning.

Vallejo residents have been told by officials it's safe to leave the house and school is back in session. But ferry service was unexpectedly shut down.
Many people were surprised the rotten smell and sheen led to ferry service disruption.

"It was strong, it burned your nose. It smelled like bad rotten eggs, I got home and it was all in my place," a Vallejo resident said.

Fire officials don't think the source of the smell is in Vallejo. Their gas detectors didn't pick up the trace of gas in the air and nothing was reported from the refineries. "We're continuing to check in with them, but so far they've reported there's been no burn offs and that there is nothing coming from them," Brown said. 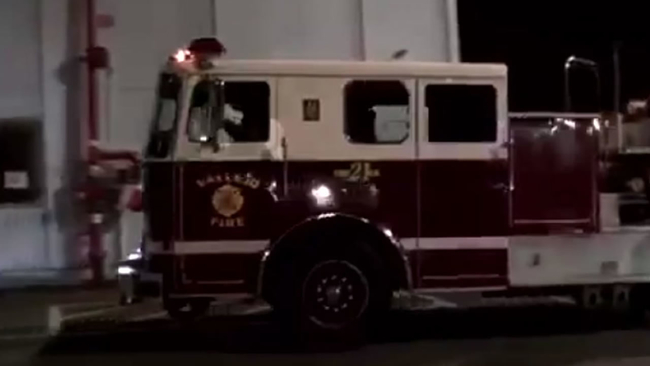