Uggs may have saved woman's foot during Macy's crash in Newark

KGO
NEWARK, Calif. (KGO) -- Police are still investigating a crash that left six people injured after a car jumped a curb and drove 50-feet inside a Macy's department store in Newark.

Just before 5 p.m. on Wednesday, the scene outside NewPark Mall was chaotic.

Six people were injured after a car jumped a curb and drove 50-feet inside a Macy's department store in Newark on Jan. 14, 2015.

Amid the sea of fire trucks, ambulances, and a shattered glass, was a mother who rushed there from home to find out what happened to her 19-year-old daughter.

"I'll never forget pulling up to that scene, and seeing what I saw," said Sally Padgett.

Padgett had gotten the call every mother fears. Her daughter, Alyssa Padgett Gambino, had been run over by a car inside a department store.

She took pictures as Alyssa was strapped down and loaded into an ambulance.

"The police officer was like, 'did you see your feet yet?' And I looked and I had Uggs on and all the Uggs were torn off. And blood, like liquid, just coming all down the floor," said Alyssa.

Doctors say Ugg boots may have saved 19-year-old Alyssa Padgett Gambino's foot from amputation after a car jumped a curb and drove into a Macy's in Newark on Jan. 14, 2015.

"I look at those shoes, I hate 'em but I love 'em," Padgett said. "I mean, like I said, if she was wearing tennis shoes or sandals, her foot would've been severed."

But in those chaotic moments, Alyssa wasn't thinking about her two broken feet. She had only one thought.

It was long after midnight when she finally learned that her friend Candace had survived after being dragged under the front of the car through the store.

"How could you possibly take that corner that fast and end up in the door?" Padgett asked. "It just blows my mind."

Police have been asking that same question.

"We believe strongly that it was probably a medical condition for the driver," said Commander Renny Lawson.

They're waiting to learn more about why the 63-year-old woman apparently didn't hit the brakes until she was already in the store.

"We want to find out exactly what type of medical condition she experienced," Lawson said. "And then we don't believe there's any criminal charges resulting from this."

For Alyssa, the road to recovery will be steep. But she has her family and her best friend.

Alyssa Padgett Gambino's feet were broken when the 19-year-old was run over by a car that crashed into a Macy's in Newark on Jan. 14, 2015.

And already, she's stronger than before.

The Macy's opened for business at 10 a.m. Thursday, even though the car took out half of the entrance to the men's casual clothes department. And only one man remains hospitalized.
Related topics:
newarkcar crashmedical emergencypedestrian struckmallmacy'sfashionpedestrian injuredshoppingcar into buildingaccidentpoliceinvestigation
Copyright © 2020 KGO-TV. All Rights Reserved.
RELATED 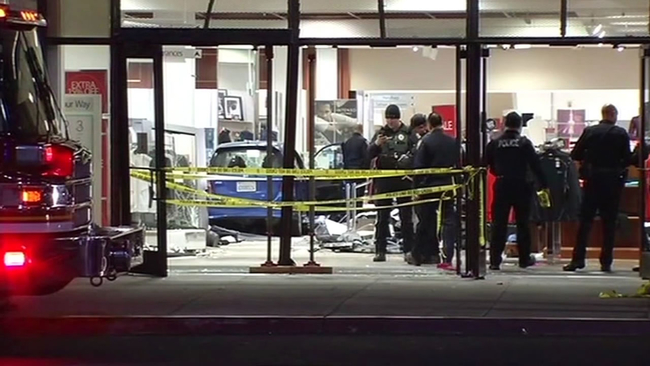