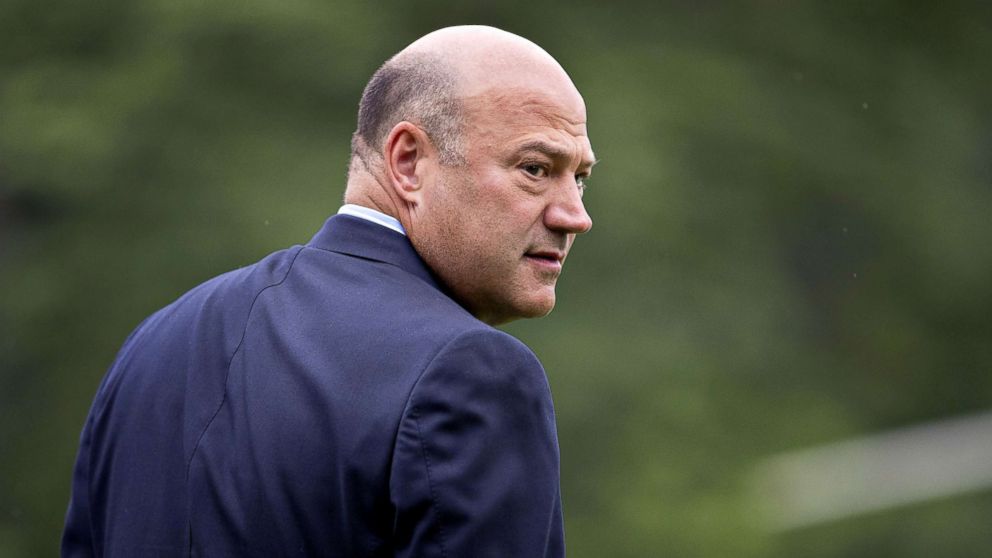 "Gary has been my chief economic advisor and did a superb job in driving our agenda, helping to deliver historic tax cuts and reforms and unleashing the American economy once again, President Trump said in a statement. "He is a rare talent, and I thank him for his dedicated service to the American people."

And in tweet a few hours later, Trump wrote, "Will be making a decision soon on the appointment of new Chief Economic Advisor. Many people wanting the job - will choose wisely!"

In his own statement, Cohn said: "It has been an honor to serve my country and enact pro-growth economic policies to benefit the American people, in particular the passage of historic tax reform. I am grateful to the President for giving me this opportunity and wish him and the Administration great success in the future."

Vice President Mike Pence tweeted of Cohn's resignation on Tuesday night, "Gary Cohn did a great job as @POTUS's Director of the National Economic Council - helping pass the largest tax reforms in U.S. history, cutting job-killing regs & spurring our economy. Thank you Gary for your tireless work on behalf of the American people."

Sen. Jeff Flake, R-Ariz., also took to Twitter, writing, "Gary Cohn has been a seasoned, steady voice on trade policy at the White House. He will be missed."

Trump's staff turnover so far has been record-setting - more than triple that of the Obama administration and double that of the Reagan White House, according to a recent study by the Brookings Institution.

Cohn was on the cusp of quitting last summer after Trump's infamous "very fine people on both sides" comment likening white supremacists to counter-protesters in Charlottesville, Va.

Earlier Tuesday, Trump hinted that there might be more departures from his White House, but pushed back on reports staffers are unhappy.

"I read where, oh, gee, maybe people don't want to work for Trump - and, believe me, everybody wants to work in the White House," Trump said at a joint news conference with Sweden's prime minister.

"Yes, they'll be people -- I'm not going to be specific -- but there will be people that change -- they always change. Sometimes they want to go out and do something else but they all want to be in the White House," Trump said.

Cohn's exit comes as little surprise after his week-long trade policy dispute with the president, who announced last week, over Cohn's objections, that he would impose steep tariffs on imported steel and aluminum imports.

Cohn, who has been the leading voice within the administration opposing the tariffs, had planned to arrange a meeting at the White House this week between the president and executives of companies that would be hurt by the tariffs, but that meeting was called off, sources familiar with the matter tell ABC News.

Last week, surrounded by steel and aluminum executives in the White House, the president made an impromptu announcement that he intends to impose a 25 percent tariff on steel imports, and 10 percent on aluminum imports. He said the tariffs were still being finalized and that he'd formally enact them this week.

The decision caught many in the president's party and in his own administration by surprise.

Though the tariffs have not been finalized, the president has said he's not backing down from his decision to impose tariffs and expressed optimism that it won't spark a trade war.

"I don't think we're going to have a trade war," Trump said Monday. At a press conference Tuesday, he claimed a trade war, if it were to happen, would be bad for the other countries, not the United States.