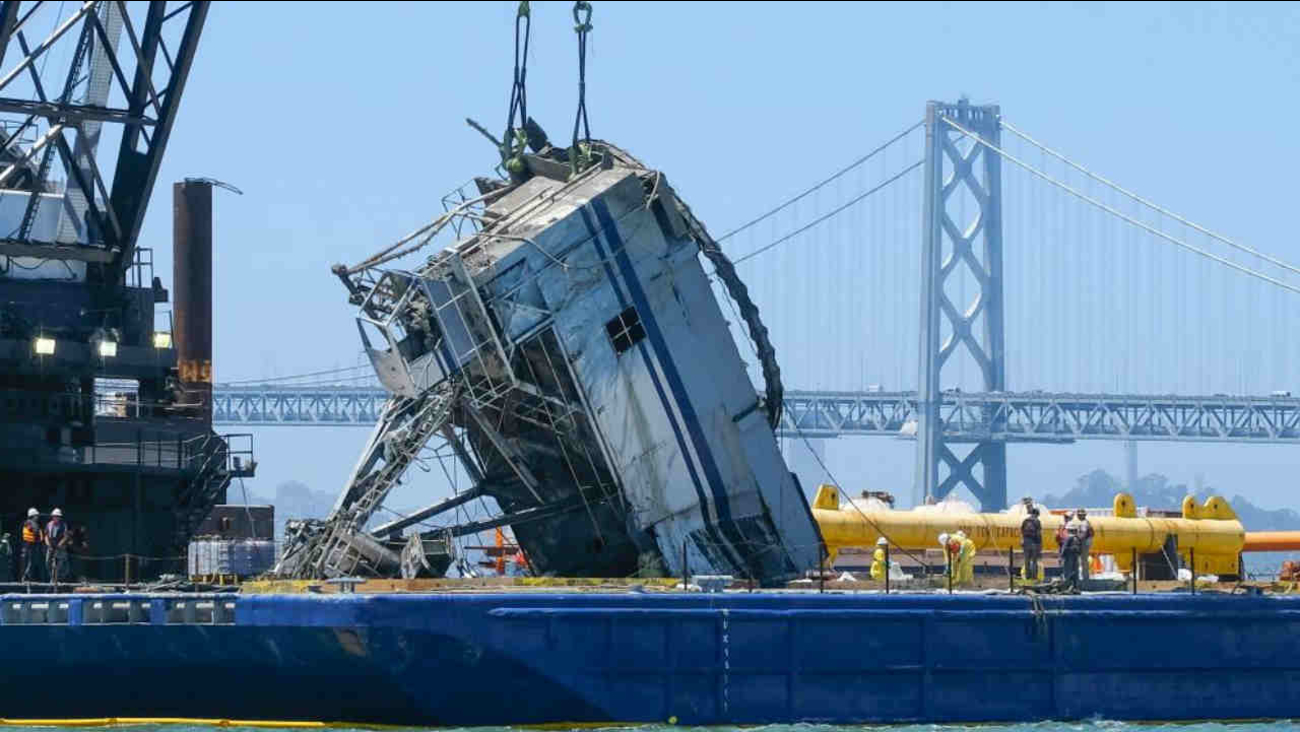 A crane housing from a sunken barge is seen on San Francisco Bay on Tuesday, July 11, 2017. (KGO-TV)

KGO
By Wayne Freedman
SAN FRANCISCO (KGO) -- What goes up, must come down.

We know that, but here's another version: When dealing with sunken barges on the bottom of San Francisco Bay, what goes down, must come up.

That's how we found ourselves on a Coast Guard boat near the Bay Bridge on Tuesday, near where, on April 7, a 112-foot barge named Vengeance sank in high winds. Vengeance landed atop the very same Trans Bay Tube on which its crew had been performing maintenance work.

Atop, we should note, with 25 feet of bay silt separating the barge from 300,000 riders per day. The Vengeance was leaking oil and had some 4,000 gallons aboard.

Finally, more than three months later, salvage crews have begun hauling it out.

What took so long?

"I never heard this would be over in a couple of days," said Kerry Walsh of Global Diving and Salvage. "I think that was optimistic speculation."

Recovering the barge has not been an easy task. The crane they're using came from Seattle. Divers have worked in water with zero visibility while cutting the barge into three pieces.

Today, they lifted out the first of them -- the crane house.

"It was a mess," Walsh said. "The barge was upside down, crane smashed under the barge. Crane boom on the sea floor."

Imagine a giant erector set smashed by an equally giant 2-year-old, 40 feet under and stuck in the mud.

Still, not as big as the Titanic.

Safe to say the Vengeance appears to have gotten some, too.

Cal Fish and Wildlife report no harm to nature from leaking fuel.
900 tons of barge should be hauled out by Friday. #abc7now pic.twitter.com/Hov0ITkRLj

It has been on the bottom since April. @USCG took reporters on a tour after divers pulled out the 1st of three pieces. #abc7now pic.twitter.com/QZs1ZMCckU